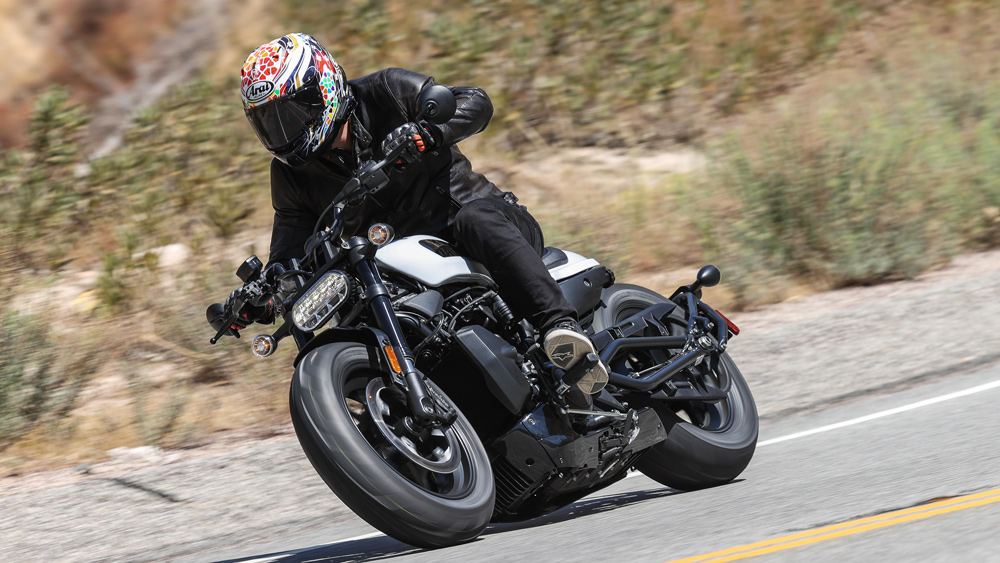 To mess with a formula that has provided a large chunk of your bottom line is to take a big step into the unknown. Lately, Harley-Davidson has been doing just that with its first-ever Adventure motorcycle, the Pan America (released earlier this year), and now by giving its iconic Sportster a top-to-bottom makeover.

The Sportster is holy ground for the Harley masses. A fixture on dealer floors for a staggering 64 years, the model has a sect all its own—even within the cult of Harley-Davidson itself. In that time, the bike has only seen two major revisions, with the 2021 edition being the third—and most comprehensive—to date.

Priced starting at $14,999, the 2021 Sportster S ($350 more if you opt for the Stone Washed White Pearl of our tester) shares the same liquid-cooled Revolution Max 1250T 60-degree V-twin motor that debuted in the Pan America, but with torque moved further down the rev range and power slightly reduced to better suit the cruiser aesthetic.

The Sportster S has a claimed 121 hp at 7,500 rpm (down from 150 hp on the Pan America), with peak torque at 94 ft lbs at 6,000 rpm. This is far from your typical Harley-Davidson motor, as it includes features like dual throttle bodies, variable valve timing, double-overhead cams and hydraulic self-adjusting lifters more akin to a power plant from Munich rather than Milwaukee. And the motor is now a fully stressed member of the steel trellis chassis, a factor that helps impart a stiffer and more taught ride than any Sportster in previous years.

Running fully adjustable 43 mm inverted Showa forks, a fully adjustable monoshock on the rear and a single-disc, four-piston-caliper brake on the front, the Sportster S sits long and low with a seat height of just 29.6 inches. The ride position is typically relaxed, with the forward-mounted controls putting you in that slouch so familiar with not just Sportsters but many machines in the brand’s lineup.

The ride feels stiffer and more taught than before, especially now that the motor is a fully stressed member of the steel trellis chassis.  Photo by Brian J Nelson, courtesy of Harley-Davidson, Inc.

Harley-Davidson is betting big on the tech, with four variable ride modes, Cornering ABS, cruise control, traction control, turn-by-turn navigation and Bluetooth connectivity all standard. Everything is accessed by a circular four-inch dash that’s surprisingly easy to navigate and takes up very little space in the rider’s peripheral vision.

One concern, however, is the rear-suspension travel of two inches. That doesn’t sound like much, and, I can assure you, it’s not. The ride can be a touch uncomfortable when slowly cruising over rough city roads, but take the Sportster S into the canyons or on your favorite open stretch and the machine comes alive. The low ride height, stable handling and sublime motor combine for a uniquely Harley-Davidson experience, complete with the sound of scraping footpegs as you quickly max out the available 34 degrees of lean angle.

The Revolution motor is a revelation. Packed with torque and matched to the four riding modes, it’s a massive step into the future for the company. It sounds, looks and feels like a Euro twin, which will be music to the ears of some, while others . . . not so much. One complaint is that the gearbox isn’t as smooth to shift as hoped for with a motorcycle of this price. The shift is a touch notchy and not as positive when the lever is in the standard spot, with neutral being found way more than I’d have liked between first and second gear.

The design team managed to get its flat-track-inspired high-rise exhaust on the Sportster S, which looks great and isn’t too loud, but is very hot, especially when there’s little or no airflow around you. When the bike is moving fast, the heat really isn’t an issue, but at low speed it’s rather annoying, to the point where it seems like the choice of exhaust configuration was a design-over-function flaw.

The Sportster S also feels a bit too one-dimensional for my taste, but it will certainly appeal to those riders who were hankering for a more nimble and muscular Sportster than what was on offer previously. We hope Harley-Davidson takes that splendid motor and puts it in a naked-bike chassis similar to Yamaha’s MT-10 or the pre-2021 Triumph Speed Triple range, then it would truly be Harley-Davidson’s model for the masses.