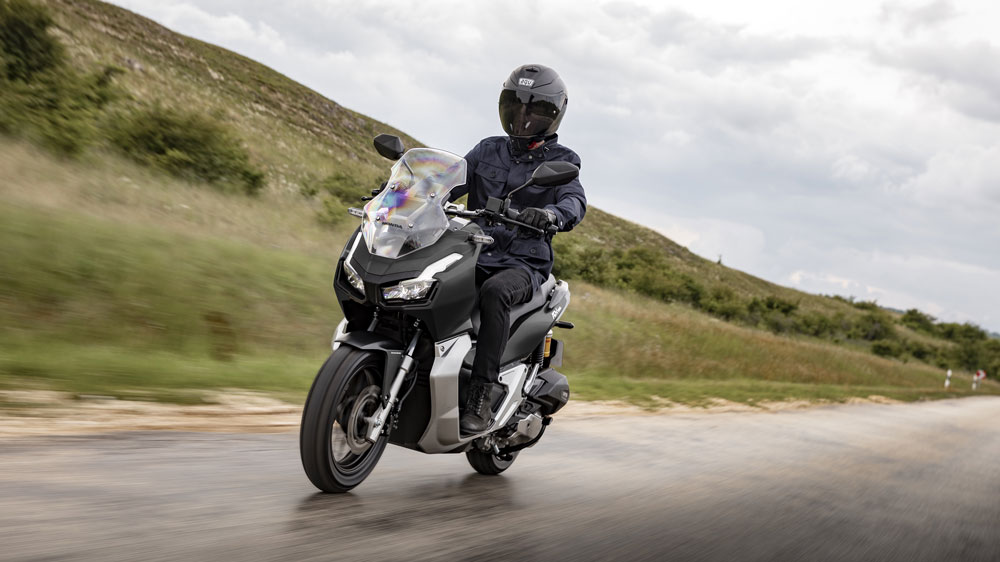 You may look at the 2021 Honda ADV150 and be perplexed as to why it exists. Don’t worry, it’s a feeling that often befalls onlookers, for this is a mechanical answer to a question no one asked. The Honda ADV150 is essentially a beefed-up version of the company’s PCX150 scooter, the little two-wheeler that’s powered Honda’s small-bore commuter dreams across the globe for the past decade.

The ADV150 utilizes a 149 cc, liquid-cooled, single-cylinder four-stroke motor matched to a single speed gearbox with an automatic centrifugal dry clutch. The scooter is, at heart, about as bare-bones as you can get in the Honda two-wheel lineup. However, where the ADV differs is the rugged looking bodywork and chunky Taiwanese (but made in Indonesia) Federal semi-off-road tires.

The ADV150 features a 7.1-gallon storage compartment under the seat, a handy half-gallon pouch on the front bodywork that houses a 12-volt plug for charging your phone and a windscreen that’s adjustable by two positions.

Yet, as odd-ball as it looks, the ADV150 is quite an enjoyable ride. My time on the Honda took me into the hills and canyons around south Orange County, Calif., perfect places to challenge the 5.1 inches and 4.7 inches of front and rear ground clearance, respectively, as well as see how the tires would stand up to some partial off-roading.

Rider conveniences include a windscreen that’s adjustable in two positions and a 12-volt charging port for your phone.  Photo: Courtesy of American Honda Motor Company, Inc.

The entire package weighs a claimed 294 pounds ready to ride, and with its 2.1-gallon gas capacity, should get about 110 mpg. The machine is far from fast, but the motor’s power delivery is so smooth that it feels like you’re riding a vacuum cleaner at times. It’ll reach 60 mph easily and is an urban traffic annihilator (although I wouldn’t want to take it on the 405 Freeway).

Honda has priced the ADV150 at $4,299, which, at $600 extra over the PCX150, makes it the most expensive scooter in Honda’s collection. Be that as it may, the build quality is very good—I have first-hand experience at how tough Honda single-cylinder scooters really are, having extensively used two Honda Lead scooters in the past—and it will go places the PCX150 can only dream of.