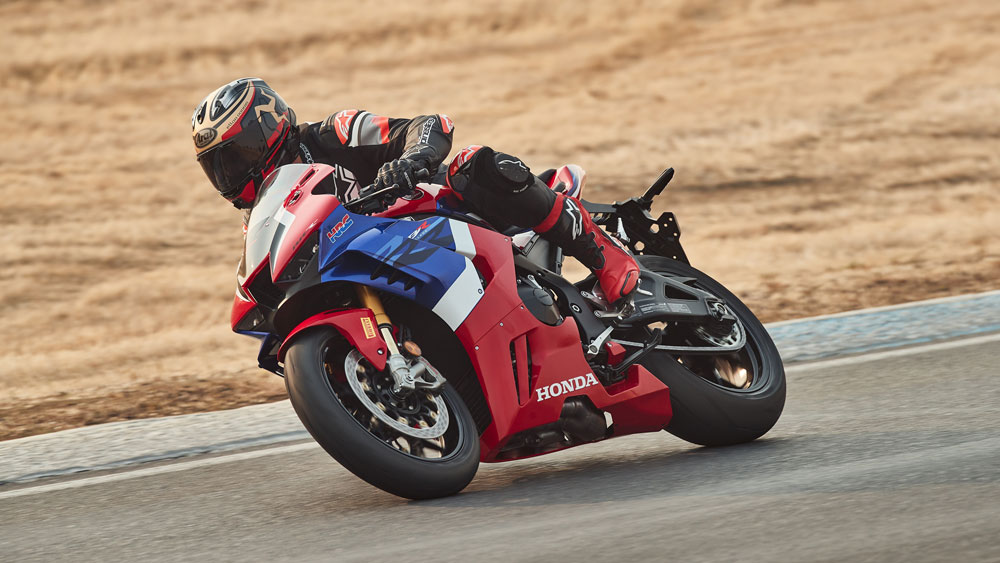 As I fire down Thunderhill Raceway’s turn-nine exit, throttle pinned to the stop, the titanium Akrapovič exhaust wailing and the wheelie control flickering in and out, I can almost hear the bike ask, “did you miss me?” The answer? A resounding “absolutely,” for this is the first all-new superbike to emerge from Honda in well over a decade, and marks the Big H’s formal return to the league of production superbike master-blasters.

The machine even gets a name change. Formerly the Honda CBR1000RR, it is now dubbed the CBR1000RR-R Fireblade SP. The “Fireblade” moniker has been used all over the world to reference the model since its inception back in 1992, except, bizarrely, here in the US—until now.

Honda is on a mission with the new $28,500 Fireblade. The company used to hold the status of class kings almost by right, but the previous decade has not been kind to Honda. While it’s pushed on with various updates from 2008 through 2020, rivals like Yamaha and Kawasaki have made considerable headway, as has the European competition in the shape of BMW and Ducati.

To right this, Honda has gone back to the drawing board and developed a new over-square, short-stroke inline four-cylinder motor with a claimed 189 hp at 12,000 rpm and 83 ft lbs of torque at 11,000 rpm. The rev ceiling has been increased 1,000 rpm to 14,500 rpm, with the motor delivering the kind of top-end performance normally reserved for the BMW S 1000 RR and Kawasaki ZX-10RR.

The engine is a far cry from the 2020 CBR, which had a lazier power delivery that was fast, when all was said and done, but not like the 2021 edition. The new motor tears through the rev range, accompanied by a roaring intake and exhaust noise that’s louder than almost every other bike in the category. It’s like the CBR is screaming, “I’m back, baby!”

The ignition has been moved to the left side of the fairing and works with the perimeter key.  Photo by Drew Ruiz, courtesy of Honda Motor Company, Ltd.

The new CBR is lighter on its feet thanks to geometry changes aimed at increasing turn-speed and maximizing side-of-the-tire feel. The chassis is lighter and stiffer than before, with a longer swingarm and wheelbase but smaller main frame. The center of gravity has been raised while the rake has been slightly relaxed at 24 degrees, but with more trail.

The bike is fit with the Öhlins Smart EC 2 43 NPX fork and TTX36 shock (similar to the suspension on the Ducati Panigale V4 S we recently tested), new Brembo Stylema calipers and Brembo master-cylinder and all new bodywork with winglets that produce the same downforce as Marc Marquez’s 2018 racer. On top of this, the electronics have been completely revised, with new algorithms for traction, wheelie control, a new launch control feature, ABS and a five-inch TFT dash with five different faces.

Akrapovič’s titanium muffler contributes to an exhaust noise that’s louder than almost every other bike in the category.  Photo by Drew Ruiz, courtesy of Honda Motor Company, Ltd.

It all combines to give a ride experience completely removed from what Honda had on sale in 2019. The new CBR will not just out run the old bike in a straight line, it’ll decimate it in corners—thanks to the more powerful brakes, sharper geometry and better acceleration grip. Partnering these attributes with the reworked electronics—especially the traction control, which doesn’t cut in as harshly as it did in the previous model—and you have a Honda superbike finally ready to play at the front of the field again.

This is a hugely important motorcycle for Honda, who, after the last decade, finally looks like it’s taking the superbike class seriously again. This machine, once breathed on by a skilled tuner, will make a fine race bike. And once it starts winning (which it will), Honda will have truly returned.