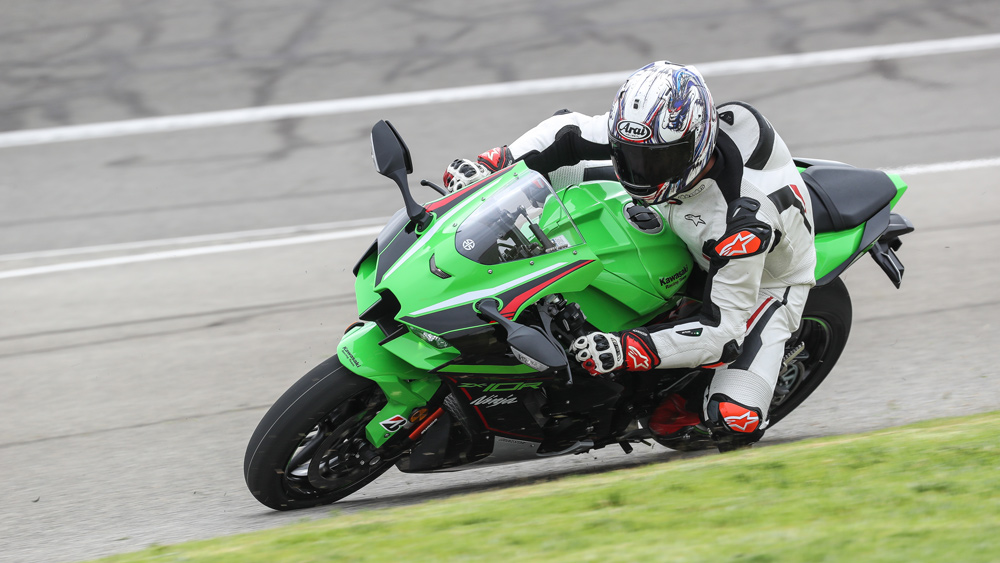 The double left-hander leading onto the massive banked straight sees the 2021 Kawasaki ZX-10R float past the apex. The stability and extremely friendly nature of the model’s twin-spar aluminum chassis and Showa suspension belie the sheer violence my right wrist is imparting to the rear Bridgestone slick tire.

There are only a few places in the US where you can hold a superbike wide open in sixth gear. Auto Club Speedway in Fontana, Calif., is one such venue, and as I exit the final turn and send every one of the Kawasaki horses to the ground, I’m catapulted at what feels like warp speed.

My left foot frantically tries to keep up with the colossal power delivery of the 998 cc inline-four engine, constantly throwing gears until I’m in sixth, but despite the speed, the ride is a surprisingly calm one. That’s mainly due to the fact that the 2021 Kawasaki ZX-10R, priced at $16,399, has totally revised bodywork aimed at producing vital high-speed downforce, keeping this green rocket on the straight and narrow.

Unlike the Ducati Panigale’s prominent winglets, those on the Kawasaki are hidden inside the fairing in much the same way as Aprilia has done with its new RSV4. To the naked eye, the winglets look as though they’re not even there, and that’s just the way Kawasaki likes it.

The new bodywork creates a significant 17 percent increase in downforce while reducing drag by a claimed seven percent compared to the 2020 version of the model. The arrival of winglets on this machine is almost entirely due to the WorldSBK rules, which dictate that Kawasaki’s world champion Jonathan Rea has them on his factory ZX-10R. Therefore, the production bike also needed them.

It’s fair to say that the new face of the ZX-10R has caused some controversy. The svelte lines of past iterations, specifically those from 2016 though 2020, have been turfed for a boxier aesthetic, although I for one don’t mind the emperor’s new clothes. Hey, if it wins races, it’ll be regarded as beautiful. Winners always are.

The wheelbase is 10 mm longer, and the wheel sits further back in the swingarm thanks to a longer length adjuster.  Photo by Brian J. Nelson, courtesy of Kawasaki Heavy Industries Ltd.

The remainder of the machine is largely unchanged from the 2020 edition, at least on the hardware side. There’s a more aggressive, wider stance from the handlebars, and the screen has grown by 40 mm. The wheelbase is 10 mm longer, achieved by a fork offset that’s now greater by 2 mm, and the wheel sits further back in the swingarm thanks to a longer length adjuster. The swingarm itself sits 1 mm lower in the frame, and the rider is tilted a mere 0.2 percent closer to the front end to help put more weight over the front while braking and cornering. Even the Showa suspension is mostly unrevised, although there’s a slightly softer front spring and stiffer rear spring employed.

What has changed is that Kawasaki now joins the rest of the world in offering variable ECU modes—including a totally customizable Rider mode—for the adjustment of the three different power modes and five different traction control maps. Oh, and Kawasaki has thankfully fitted cruise control to the ZX-10R.

The bike offers a 17 percent increase in downforce while reducing drag by a claimed seven percent compared to its predecessor.  Photo by Brian J. Nelson, courtesy of Kawasaki Heavy Industries Ltd.

The culmination of these subtle, but important, modifications is a ride experience in direct contrast to many others in the superbike category (not naming names). It’s little wonder that the ZX-10R populates Superstock racing grids across the globe—it’s so easy and intuitive to ride, with none of the aggression associated with some of the pricier machines in the category.

The bike is also less confusing. Unlike many of the competitors, it has no adjustable wheelie control and only five TC maps, a simpler approach that takes out much of the angst when deciding on your preferred setting. The ZX-10R is a case of everything you need, nothing you don’t.

Under brakes on the admittedly aging Brembo M50 calipers, the ZX-10R has a deft feel at the ’bars, communicating where the front tire is and alerting the rider to any impending danger. It might not be the flashiest superbike out there, but I’ll wager that a far wider range of riders will be comfortable, and thus faster, on this motorcycle than any other bike in the class.

The Kawasaki’s exemplary motor is paired with great suspension, all the electronics you need and a gloriously light-on-its-feet feel. It’s a superbike anyone can get on and enjoy, from the current WorldSBK Champion Jonathan Rea to the everyday rider on the street.