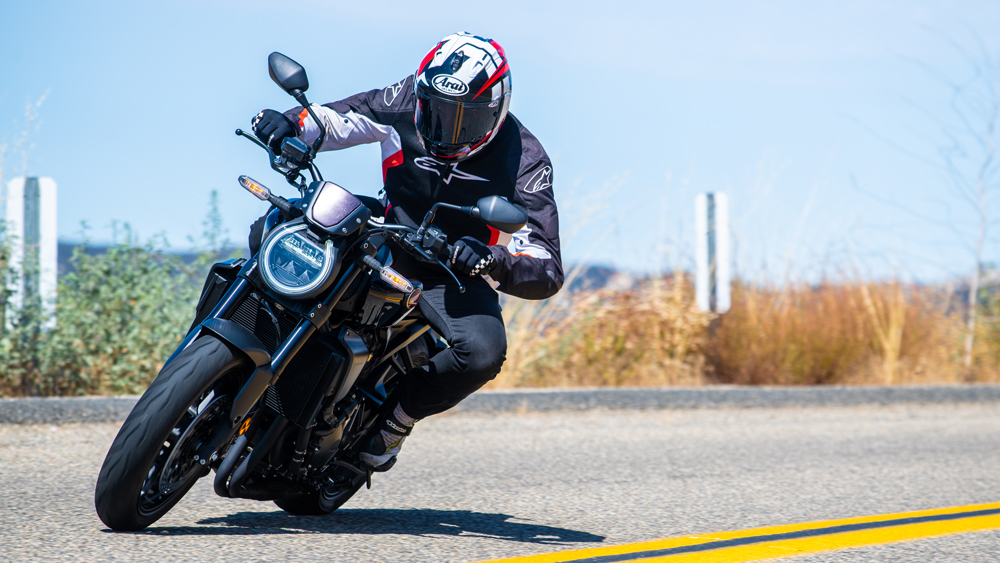 When it comes to a performance shootout, the 2022 Honda CB1000R Black Edition is absolutely no threat to the super naked bikes in the $20,000-plus neighborhood. After all, gone are the days when sub-150 hp motorcycles could be considered leaders of the naked-bike pack, with rivals like KTM’s 1290 Super Duke R and, in particular, the Ducati Streetfighter V4 S delivering far more output than that.

To look only at the numbers, though, ensures missing the entire point of the new $12,999 CB1000R Black Edition. This is a naked bike much more in line with what made the class so popular in the first place—spritely performance, great value and a spectacular aesthetic.

The name “CB” is as important to Honda as “911” is to Porsche. The 1969 Honda CB750 is what set the company on the path it’s on today, and is a machine often regarded as the grandfather of the superbike category. Nowadays, the CBR moniker runs the Honda superbike game and the CB is angled more at casual street use than breaking lap records. Honda has staunchly refused to get involved in the naked-bike arms race when it comes to power, a contest currently involving BMW, Ducati, Triumph and Aprilia, to name a few. Instead, Honda has elected to keep things on the simple side, and at a price point reflective of that.

The bike’s bodywork comprises a stunning collection of gloss-black and flat-black panels, while at the heart is a 998 cc inline four-cylinder motor that draws its heritage from the first full-size, short-stroke 1000 cc CBR1000RR back in 2004. Geared quite short in the first four ratios, the bike offers performance that’s snappy and bratty, making it feel as though you’ve got more than the claimed 143 hp on tap.

This short gearing means you’ll get plenty used to using the six-speed gearbox, one that, thankfully, has been endowed with a delightful up-and-down quickshifter that has three levels of sensitivity. There are also four ECU modes—Rain, Standard, Sport and User—accessed through the five-inch TFT screen, but it’s effectively three modes as User allows you to choose the various parameters you want from the other modes and combine them into one. That means that the settings for power, traction control and engine brake control can be independently customized between those three ECU modes. Alas, there’s no cruise control or heated grips for the rider, but those aren’t major demerits.

The CB is graced with Showa’s fully adjustable Single Function Fork Big Piston (SFF-BP), a nicely equipped fork that does its job admirably, although the rear shock’s performance is a bit of a letdown. Soft at the top of the stroke, it can be a little harsh across sharp-edged bumps as the shock’s piston plunges down its stroke as you begin to wind the pace up. Sedate cruising is no problem on the CB, but begin to ride the chassis fast and you’ll begin to explore the outer limits of the shock quite quickly.

This rear suspension characteristic plays more to the CB’s modus operandi than any other. The Black Edition is not designed in the fashion of a European naked-bike challenger. It harkens back to a more genteel time in riding, one where style weighed as heavily as outright performance—if not more so. That might sound a bit derogatory, but it’s not meant to be. The CB is still Honda’s top-tier naked bike and thus has more than enough go to match the show. If anything, the model is more accessible to a far wider range of riders than, say, an Aprilia Tuono V4 Factory will ever be. Consider it performance for the people.

McLaren’s First EV Is Here. . . And It’s a Scooter