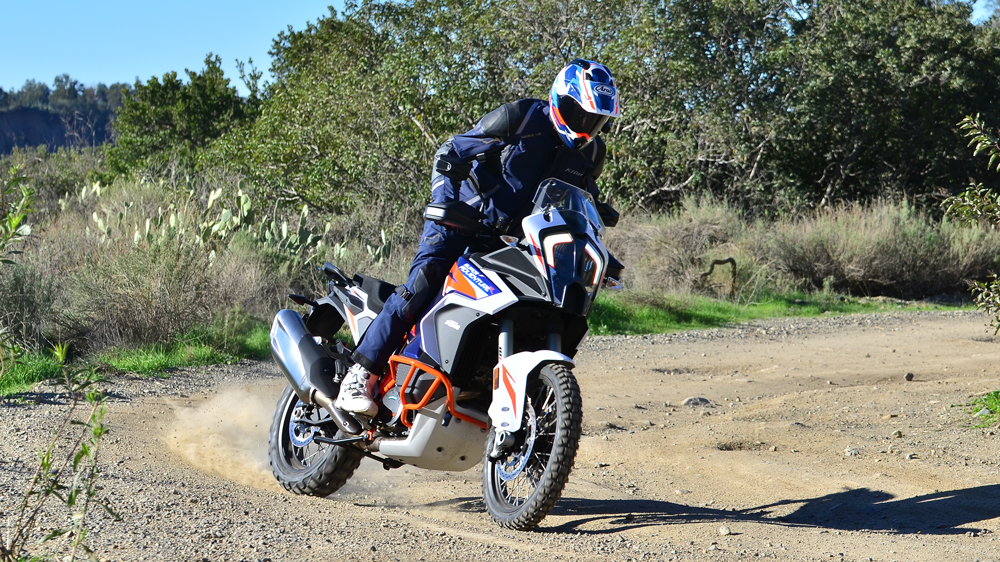 There are adventure bikes, and then there are adventure bikes. The former might consist of (not naming names here) bikes most owners buy and ride to the café, the machine never seeing a dirt road despite its design ethos. Then there’s the 2022 KTM 1290 Super Adventure R, designed squarely for the dirt and aimed at those who couldn’t care less if they never saw a café again.

The Super Adventure R has undergone a comprehensive redesign for the model year. Leading the changes are a new steel frame that’s 22 pounds lighter than before, plus new geometry, bodywork and a revised suspension for better off-road performance. The mission brief wasn’t so much to go smaller, but definitely tighter and slimmer.

The 2022 KTM 1290 Super Adventure R, a leader in the adventure-bike segment.  Photo: Courtesy of Peter Jackson.

The fresh bodywork cloaks either side of the redesigned split-style radiator that narrows the front of the machine significantly. The steering head is .59 inches closer to the rider for greater control, and the swingarm gains .59 inches of length to cope with the demands of the bike’s 160 hp, 1,301 cc V-twin doing its best to shred the Bridgestone AX41 off-road tires to their core.

Weighing a claimed 550 pounds with a full six gallons of gas, and standing 34.6 inches at the seat, this is an imposing, aggressive motorcycle. It’s a good thing KTM has given the rider every conceivable electronic aid in which to keep everything rubber side down. The electronics suite includes traction control, cornering ABS, off-road ABS (that lets you disengage the rear brake on the dirt) and cruise control. And the engine modes comprise Rain, Street, Sport and Off-Road. Other tech enhancements include keyless ignition and tire pressure–monitoring sensors as standard fitment. There’s also a 7-inch TFT dash that you can hook your phone up to via the KTM My Ride system for navigation and communication.

On the hardware side, there’s those massive, orange engine guards and the under-engine guard that also come standard. In true KTM fashion, worthwhile options are also available, such as the must-have Rally Pack that houses an extra throttle map and access to the nine-stage adjustable traction control system (as opposed to the standard on/off TC map). However, it’s the Tech Pack you really want, as that provides everything included in the Rally Pack as well as features like Hill Hold Assist, Motor Slip Regulation and the Quickshifter+ system for clutch-less up-and-down gearshifts.

The latter configuration is what our test bike came with, and trust me, once you try the light-action KTM quickshifter, you’ll never want anything else. KTM must be applauded for creating a motorcycle with handling that thoroughly belies the bike’s size. Yes, it’s dynamically a huge machine, but the way it carries itself off-road is extremely impressive. It’s truly at home on rough dirt byways, mixing a deft throttle, at low speed and low rpm, that hides the mammoth power output to a chassis that utterly eats the next rock or hill.

Mission control is the 7-inch TFT dash with the KTM My Ride system for smartphone functionality, including navigation.  Photo: Courtesy of Peter Jackson.

Yet you certainly don’t want to topple over on the 1290 as there’s a lot of bike to go down, and a chance of smashing the mission-control dash. But given the generous 62-inch wheelbase, it would have to be a rather large misstep by the rider to do so. The chassis is extremely stable, allowing you to drift off-road with confidence, and that’s before you throw in the added safety net of the nine-stage traction control.

All of that said, it’s unlikely you will take a 1290 into really rutted, treacherous terrain. As good as it is, the model variant is still not a fully sorted dirt bike, but it’s not too far off the mark. On the road, it’ll get to 100 mph faster than a bike that looks like this has any right to. Superbikes of 15 years ago weren’t this fast. But you’ll also notice the dirt-bike stance, and it’s not the most comfortable at high speed given the rider’s arms are higher than normal, though it’s a small price to pay for the gain you get when the road gets dusty.

KTM makes focused motorcycles, so we shouldn’t be surprised this 1290 Super Adventure R is aimed at the real ADV riders out there. Nor should we be surprised to call this the best big-bore ADV machine yet from one of the category’s benchmark manufacturers.