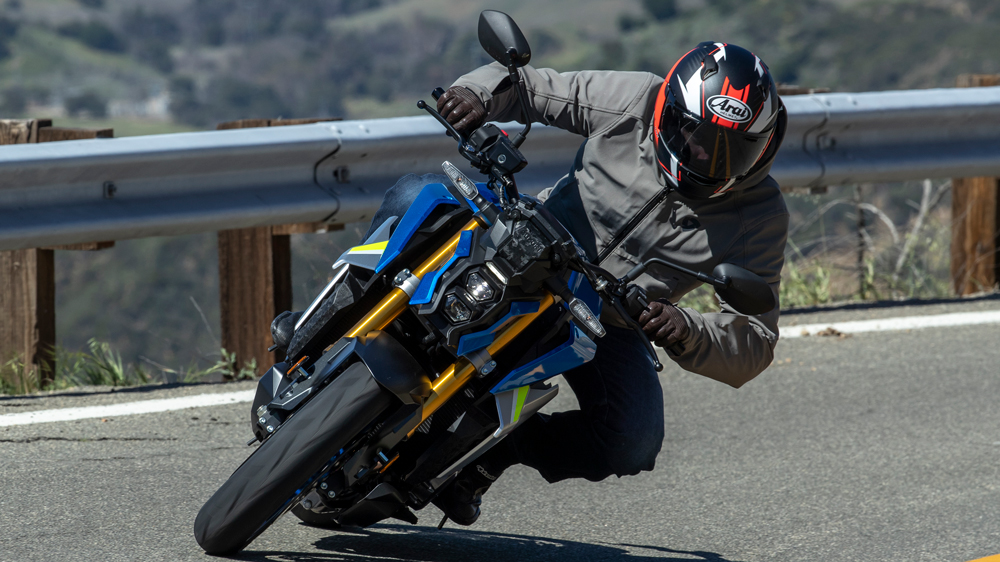 Suzuki has flown under the radar somewhat in recent years, its manufacturing output pretty quiet in terms of new models launched, especially during the time of the pandemic. The 2022 model year, however, marks a big one for the manufacturer as two new street bikes are coming: the GSX-S1000 GT that we’ll be testing next month, and this GSX-S1000 naked bike.

The GSX-S is Suzuki’s premium offering in the highly competitive naked-bike space, going against Honda’s CB1000R, Yamaha’s MT-10 and Kawasaki’s Z900. Yet given the fact that Suzuki’s $11,299 GSX-S1000 pumps out a claimed 149 hp, it’s not really fair to label it a “supernaked” as we would the 200-plus hp machines from MV Agusta or Ducati. But there’s still very much a sporting heritage on which the GSX-S1000 draws.

The 2005 Suzuki GSX-R1000K5 is the all-time king of Suzuki superbikes, and it has been used extensively as the base for the GSX-S range since the latter came into being in 2015. That’s still the case for 2022 as the GSX-S’s 999 cc inline four-cylinder motor can draw its lineage from the K5. In addition, the chassis is a mix of modern touches, like incorporating the current generation GSX-R’s swingarm with the K5-derived main frame.

The motor has been heavily breathed upon, with new intake and exhaust cams, valve springs, cam chain and tensioner, crank-mounting hardware, a new slipper clutch, clutch cover and a new quick shifter for the six-speed gearbox. This gearbox/quick-shifter combination is absolutely one of the best on the market for any bike today. The power plant is wrapped in a compact chassis that’s cloaked in all-new bodywork, one that’s a massive departure from the 2015 model.

Aggressive and sharp, the bodywork contains a triple-stacked LED headlight that dramatically tightens up the front of the motorcycle and is flanked by racing-style aerodynamic winglets that really don’t do much other than look racy. A new seat unit and tank shape change the rider triangle somewhat, putting a touch more weight on the wrist as you load up the KYB suspension and Dunlop Roadsmart 2 tires.

There’s no six-axis Inertial Measurement Unit and electronic suspension here, just good old conventional clickers for your adjustment. But the lack of electronic suspension is not missed too much on the street. The ride is just on the right side of firm, with enough support for fast road riding without being too harsh on long freeway stints. The suspension isn’t the most premium we’ve tried so far this year, but given that this is a 999 cc naked bike for under $12,000, we’ll forgive Suzuki for that.

One area we cannot forgive is the dash. This is one of the hardest dashes to read of any I can think of for many years, and nearly impossible to read at a glance when the sun is high. The dash is easy enough to adjust via the left switchblock, but it looks and feels like it’s from the Gameboy era and doesn’t do anything to increase the quality of the machine. The lack of cruise control is also a misstep by Suzuki.

Seemingly a throwback to the Gameboy era, the dash is difficult to read, especially when the sun is high.  Photo by Kevin Wing.

The ride is saved somewhat by that excellent motor and gearbox/quick-shifter functionality. The changes wrought have given a flatter torque curve that allows you to surf up and down the 4,000 rpm to 8,000 rpm rev range with oodles of go on tap. And the motor has a howling intake noise that’s utterly addictive when you hammer the throttle and start clicking those gears.

The GSX-S1000 has its flaws, but there’s certainly good value to be had. We’ll be testing the sport touring GSX-S1000GT in the coming weeks, and even though it’s based on the same K5 platform, it’s laden with much more tech. And that tunes up our expectations exponentially.