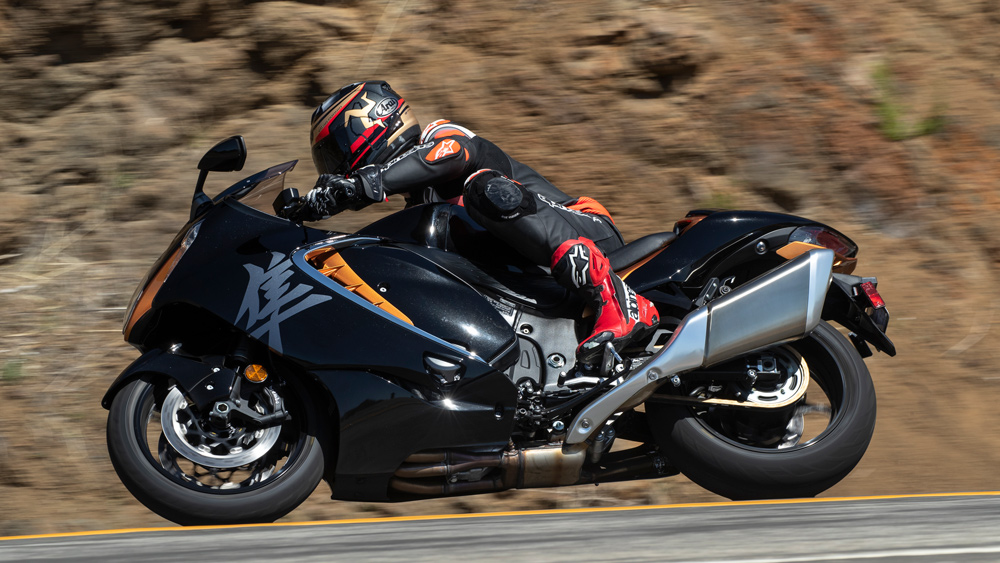 There are motorcycles, then there is the Suzuki Hayabusa. The Hayabusa, its name being the Japanese word for “peregrine falcon,” is the machine that cemented Suzuki’s legacy as the King of Speed, crowned in an age when the company was engaged in a fierce domestic war with Honda and Kawasaki as to just who had the fastest production motorcycle. That was way back in 1999, the year the model roared onto the scene and promptly disposed of the Honda CBR1100XX Super Blackbird, taking the top spot in the top speed stakes.

It was, in all honesty, a fight that never really started, as the following year in 2000, the Japanese manufacturers got together and shook hands on a gentleman’s agreement that their respective production bikes would not exceed 300 km/h (186.4 mph).

In the 22 years since its debut, the bike formerly known as the GSX1300R Hayabusa has only seen one update—until now. That was in 2008, where the motor was stretched to 1,340 cc, new, slipperier styling was implemented and everything was nipped and tucked to keep the ’Busa at the head of the hyper-touring market.

For the 2022 model year, Suzuki has gone back into its catalog of greatest hits and revamped the bike for a new generation. Selling for $18,599, the latest edition features a motor that hasn’t grown in capacity as some may have hoped for (nor has it had cylinders or a turbo/supercharger added), but there’s over 500 new or redesigned internal components.

Purists will note the new machine is slightly down on the performance offered by the 2008 model, with a claimed 187 hp at 9,750 rpm and 110 ft lbs of torque at 7,000 rpm, compared to the 2008’s 194 hp and 114 ft lbs of torque. Much of this, and the increase in weight to a claimed 582 pounds ready-to-ride, is due to the associated hardware required to meet the strangling emissions targets of Euro5 regulations. Suzuki has done an excellent job here because, unlike so many motorcycles that hit an emissions-induced roadblock right as the power begins to build, the Hayabusa just rips right through.

The chassis is suspended by new, fully-adjustable KYB forks and shock, while the wheels are shod in Bridgestone S22 tires.  Photo by Kevin Wing, courtesy of Suzuki Motor Corporation.

The midrange torque is nothing short of prodigious on the new machine, and a reminder of how the old saying “there’s no replacement for displacement” always rings true.

Matched to an utterly sublime gearshift that’s about as smooth and precise as you can get these days, the Hayabusa’s revamped engine is a joy to experience. There’s torque at every section of the rev range, pushing with incredible force.

You’re dealing with a large motorcycle in very much the old-school sportbike configuration. There’s 58.3 inches of wheelbase, some 2.4 inches longer than a GSX-R1000R, and its total weight is 137 pounds more than a GSX-R. Those figures alone tell you the tale of the turns regarding a Hayabusa. This is not the ideal machine to sail through tight canyon switchbacks on, but it adores long, sweeping, high-speed cornering, much like its namesake peregrine falcon does in the sky.

With such a long and low chassis and a seat height of 33.5 inches, the rider is positioned very much in the Hayabusa rather than on it. This imparts a sense of connectivity to the machine that few other motorcycles can match, which is part of the reason the original was such a success.

The chassis is suspended brilliantly by new, fully-adjustable KYB forks and shock, which are conventionally operated as opposed to the industry’s current trend of making top-level suspension all electronic. Conventional suspension, when set up correctly, always trumps electronic suspension, and this has proven true of the Hayabusa. Road holding is excellent, the bike forcing the Bridgestone S22 rubber into the ground and giving you all the performance you can handle.

The 2008 Hayabusa was an electric dinosaur compared to this edition (it didn’t even have ABS or variable ride modes). In contrast, the 2022 version gets every electronic aid the manufacturer could possibly throw at it as part of the Suzuki Intelligent Ride System (S.I.R.S). There’s 10-stage traction control, 10-stage wheelie control, six different power modes (three that are preset and three customizable), a two-stage up-and-down quick shifter, a three-stage engine brake control, a three-stage launch control, cornering ABS, cruise control, an active speed limiter, hill hold control and even slope decent control to stop the rear wheel lifting under heavy braking while going downhill.

And it’s all completely unremarkable. It works, and works well, but although there are many different systems in place, what the Suzuki Hayabusa has now is roughly on par with what the rest of the top-shelf superbike class has. What’s more impressive is its aerodynamic acumen. The engineers spent a huge amount of time in the wind tunnel making the new Hayabusa even slipperier than before, and it cuts through the air like a bullet. High-speed stability is rock solid, and the bike is a reminder that long-distance touring can still be achieved with clip-on style handlebars.

The best part is, it still looks unmistakably like a Hayabusa. This is a classic shape that, like the original Porsche 911, has only seen refinements rather than a complete aesthetic overhaul. It was a bit surprising to see Suzuki bring the Hayabusa back after such a long time, but we’re all the better for its return. Motorcycling needs its heroes, it’s speedy forefathers, and there’s hardly a more powerful name than Suzuki Hayabusa.