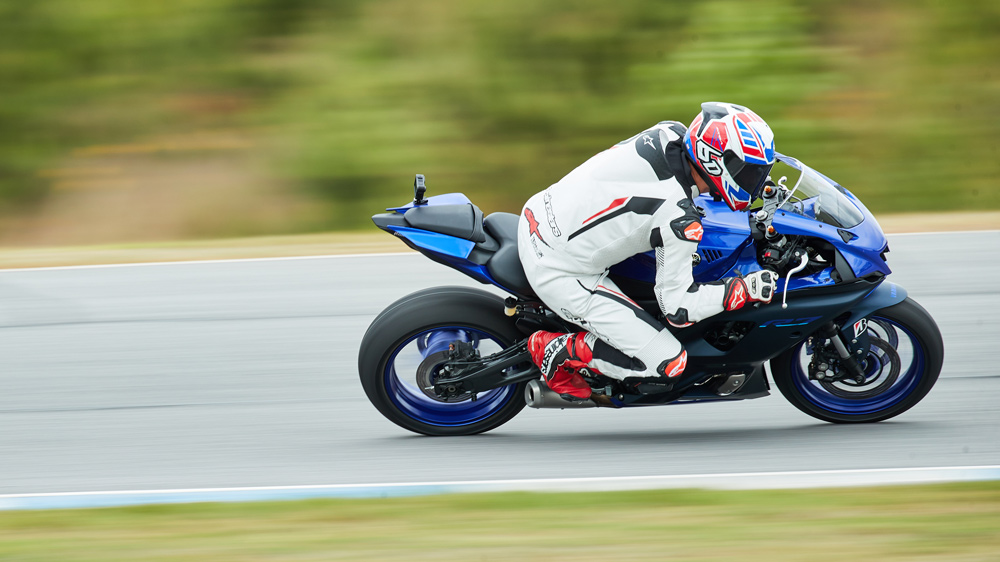 Sportbikes are in a transition period. On one hand, we’re seeing the slow death of the beautiful 600 cc super-sport class, with no real replacement on the horizon. On the other side of the garage, there’s the emerging trend of middleweight twin-cylinder sportbikes like the Aprilia RS 660 and, now, the all-new Yamaha YZF-R7.

If the latter name sounds familiar, it should. The Yamaha YZF-R7 OW02 was the famed superbike created by the Japanese motorcycle manufacturer back in 1999—an extremely limited-edition machine made in just enough numbers to satisfy the WorldSBK homologation rules of the time. It never won the championship, but the R7 is widely considered to be one of Yamaha’s finest superbike designs.

Yamaha has decided to now give the moniker to its new MT-07-based model. With the YZF-R6 no longer with us, the 2022 Yamaha YZF-R7 is the middle child in the Yamaha sportbike family, nestled between the YZF-R3 and the all-conquering YZF-R1. Filling the role of the R6 is a tall order, yet Yamaha has consistently reminded us that the R7 is not a direct replacement but, rather, an entirely new direction for its sportbikes.

Priced at $8,999, the R7 takes the splendid MT-07 naked bike as its base and wraps some very R6-like bodywork around it to create Yamaha’s first twin-cylinder sportbike in the middleweight class. Yamaha isn’t mentioning any power or torque numbers, but you can bank on around 75 hp from the 689 cc motor if the MT-07 is anything to go by.

Paired with the same steel frame as the MT-07 but with stiffer inverted front forks and a rear shock that uses a different linkage from that of the naked bike, the R7 is primarily designed for the street but also performs impressively on the racetrack. And so that’s where we went, the Atlanta Motorsports Park in Georgia, to test it out.

The undulating nature of that circuit gave the R7 plenty of opportunity to show off its incredible agility, the chassis changing direction with the kind of speed that the four-cylinder R6 could only dream of. That’s almost entirely down to the lack of reciprocating mass from the twin-cylinder motor, with Yamaha claiming the R7’s weight to be 414 pounds ready to ride with a full 3.4-gallon tank of gas.

Yamaha has not released the power and torque figures for the bike’s 689 cc motor.  Photo by Drew Ruiz, courtesy of Yamaha Motor Co., Ltd.

The bike’s ease of use in the corners is paired with what can only be described as one of the friendliest engines of the last decade. The creamy-smooth power delivery will appeal to almost every rider, especially those new to sportbikes. There’s plenty of torque on tap, and it doesn’t rev with anywhere near the ferocity of the old R6. The new R7 can be likened to the charismatic grown child of a champion boxer, fun to spend time with but lacking the fire and single-minded purpose of the famed parent.

Although designed for the street, the YZF-R7 impressed us with its performance on track.  Photo by Drew Ruiz, courtesy of Yamaha Motor Co., Ltd.

The original YZF-R7 was an absolute expert-level machine, whereas the new-generation offering has a far broader reach when it comes to potential owners. There are, however, some flaws. The front brakes don’t have the kind of feel we’ve come to expect from Yamaha’s sportbikes, despite having ample power, and the gearbox is not the nicest on the downshift, where I missed the gear a number of times heading into the circuit’s tight turn one. Yet both these gripes came after pushing hard on the track, so it remains to be seen if they present themselves when we’re cruising between traffic lights.

The 414-pound model’s agility is owed largely to the lack of reciprocating mass from the twin-cylinder motor.  Photo by Drew Ruiz, courtesy of Yamaha Motor Co., Ltd.

This new direction for Yamaha’s sportbike segment is a sound one, although the transition is not quite finished as there now exists quite a gap in performance between the R7 and the next bike on the ladder, the R1. The company has the answer in its pocket with the revamped MT-09, and a sportbike bearing that beautiful three-cylinder motor would be very seductive indeed. Regardless, the 2022 Yamaha YZF-R7 presents more than meets the eye, which is a good thing considering the expectations that come with the family name.