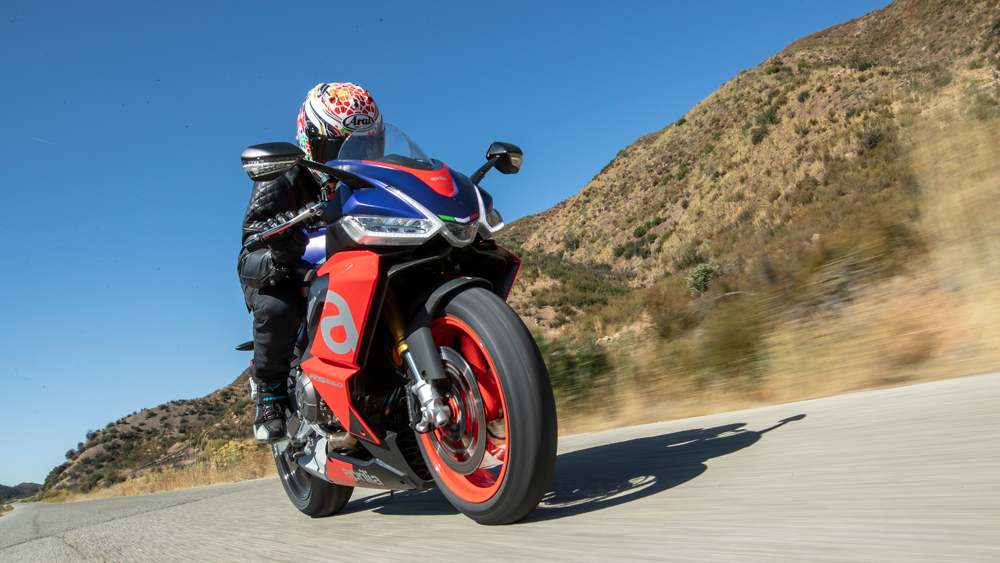 Almost one year ago, we waxed poetic about the forthcoming Aprilia RS 660: “The RS 660 harkens back to Aprilia’s early days as a manufacturer that built its name, not on high-horsepower superbike monsters, but svelte, lithe machines that hunt racetrack apexes and twisty mountain roads for breakfast.” Quite a statement for a machine we’d only seen on a rotating stand under lights at the EICMA Show in Milan. But we knew a good thing when we saw it. This past week, however, we finally had the chance to sample the real deal around the hills of Santa Barbara and prove that our praise of the machine was deserved.

The $11,300 Aprilia RS 660 is powered by a delightfully smooth, 100 hp parallel-twin four-stroke, mated to a six-speed gearbox, and weighs just 403 pounds with a full tank of gas. With a host of electronic rider aids that make even some top-level superbikes blush, it’s the kind of ride that everyone from amateurs to professionals will take for a spin and instantly fall in love with.

The reason is simple—unlike most sports motorcycles, the RS 660 does more than one thing really well. It will certainly hunt racetrack apexes and twisty mountain roads for breakfast, offering sporty steering geometry for supreme cornering poise and agility during direction changes and under braking, but it will do so with a more comfortable riding position than either a superbike or super-sport machine could dream of.

The handlebars are angled above the steering head and the footpegs are mounted lower on the frame, offering an almost naked-bike riding position. This takes the weight off the wrists and allows for hours of riding without getting overly cramped.

Riding the Aprilia RS 660 in the hills above Santa Barbara, Calif.  Photo by Kevin Wing.

There are three road-riding modes (Commute, Dynamic and Individual) and two for the track (Challenge and Time Attack), although the Individual and Time Attack modes are essentially the same thing, apart from having your lap timer on full view rather than the speedometer.

Individual and Time Attack are variable, so can be set up with the desired levels of traction, wheelie control, engine brake control and other parameters. The other modes (Commute, Dynamic and Challenge) all have preset levels of electronic intervention.

The RS 660 heralds a new era of do-it-all sport bikes. Riding the latter used to be about carving lap times and reaching mind-bending top speed, but those days, while still here, are fading in relevance now that the RS 660 is available. The model can do everything a superbike can do, and then some, as it comes in a package much more user-friendly and accessible for a wide range of riders.

Aprilia will use the RS 660 as a launch pad for two more models next year—the Tuono naked bike and the Tuareg adventure bike, set for release in February and at the end of 2021, respectively. And if they are half as good in their given categories as the RS 660 is with sport bikes, Aprilia’s bright future cannot be overstated.