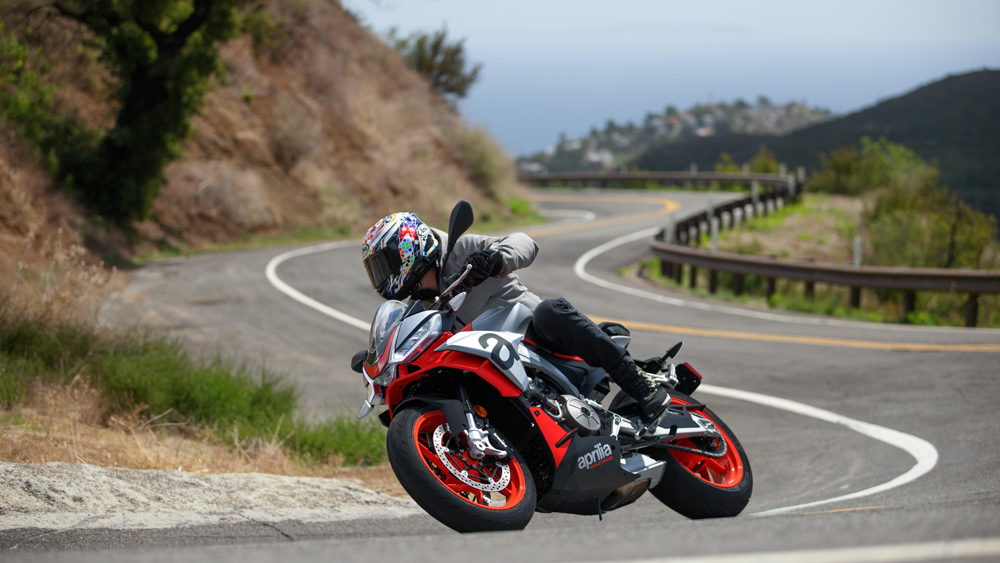 The Aprilia Tuono has been near the top of the naked-bike class since it flashed on the scene nearly 20 years ago as the twin-cylinder Tuono 1000. Since then, it has morphed into the Tuono V4 1100 fire-breather we know and love today, but it never had a smaller-capacity counterpart until now—a role brilliantly filled by the Aprilia Tuono 660.

When the Tuono 660’s sportbike sibling, the RS 660, was launched last year, it marked a new direction that reshaped the brand’s approach to the sub-700 cc category. The RS was the first in what will become Aprilia’s three-pronged attack on the sportbike, naked bike and, eventually, adventure sector; the latter with the forthcoming Tuareg that will be launched at the end of this year.

Simply due to the rigors of adventure riding, the Tuareg will be vastly different to the RS 660 in terms of chassis architecture, but the Tuono 660 is not. Aside from a new set of skimpy clothes and a single-piece handlebar, the Tuono is almost identical mechanically to the RS. The same 100 hp, 659 cc parallel-twin sits inside the same twin spar chassis. There’s even the same Aprilia Performance Ride Control (APRC) electronics suite that’s a leap above ones found in any other machine in this segment.

The model’s 659 cc parallel-twin motor is derived from that of the Aprilia RS 660 sportbike.  Photo by Larry Chen, courtesy of Aprilia.

The APRC system gives you multi-level traction, wheelie, and engine brake control, as well as cruise control and different maps for the ABS (including the ability to switch it off on the rear for sporty riding). Starting at $10,499, the Tuono 660 represents quite a value for the money, although Aprilia has oddly left the six-axis inertial measurement unit (IMU) as an aftermarket upgrade. Should you pay the additional $200 at the dealer, the Continental IMU will provide additional functionality like Cornering ABS and Cornering Lights (helping you see around bends), which is worth the money, but it would have been nice to see that all come standard.

The Aprilia Performance Ride Control (APRC) electronics suite is a leap above every other machine in this segment.  Photo by Larry Chen, courtesy of Aprilia.

As it has done with the V4 1100, Aprilia has created a best-of-both-worlds situation with the Tuono 660. A comfortable ride position is paired with a chassis that’s equally at home playing in the canyons as it is doing quick trips into the city or the weekly commute. The nimble nature of the model is an aspect that riders of every experience level will love, especially newbies or those who feel that a snarling 170 hp V4 is a little too much to handle.

The Tuono 660’s motor is a serious performer, although it is hampered by a dip in torque from 5,000 rpm to 7,000 rpm. This is a byproduct of Aprilia’s having to tune the motorcycle to meet Euro5 emissions regulations, but once you’re clear of 7,000 rpm, the drive from the relatively small power plant is stupendous considering its size.

The Tuono 660 pairs a comfortable ride position with a versatile chassis that allows for nimble response.  Photo by Larry Chen, courtesy of Aprilia.

Also impressive is the ride quality provided by the Kayaba suspension—it’s plush while still allowing the chassis to remain taught when you hit the fun stuff. It’s not the highest quality suspension out there—there’s only preload and rebound adjustment front and rear—but, overall, the performance is good considering the model’s price range.

Starting at $10,499, the Tuono 660 does not come with an inertial measurement unit, although the system is available as an option.  Photo by Larry Chen, courtesy of Aprilia.

The Tuono 660 is arguably the most needed machine in Aprilia’s lineup. A naked bike will always trump a sportbike for practicality, and this is a worthy junior to the senior V4 1100, which no longer has to shoulder all of the responsibility that comes with carrying the famed Tuono name.