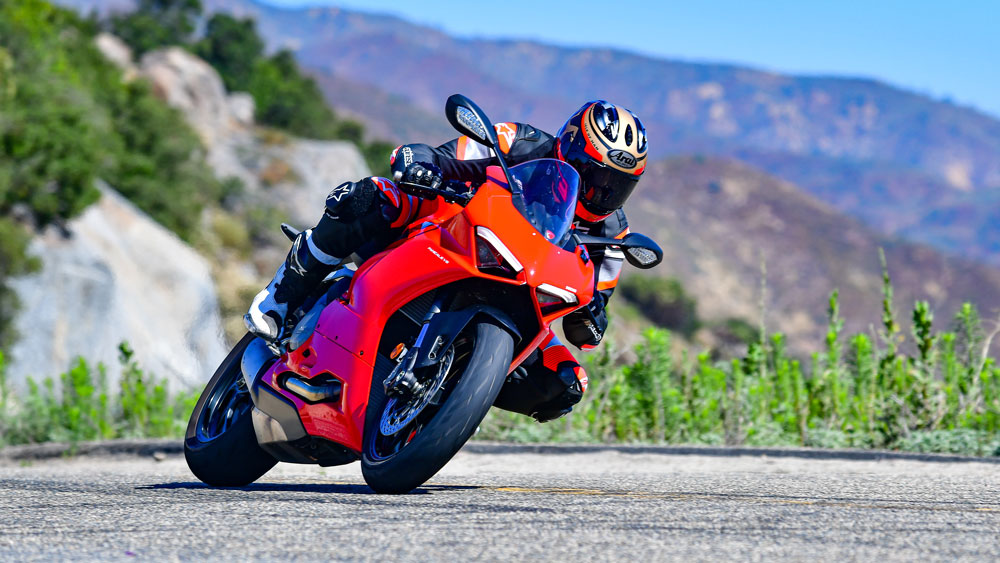 Last week, we named three motorcycles that, in our view, represent the best of sport bikes today. In that list sat one model from Japan, one from Austria, and one from Borgo Panigale in Italy. The latter is Ducati’s Panigale V2—one that’s consistently overlooked amidst the hysteria of the Panigale V4 range.

We’ve tested the Panigale V4 S, V4 R and Superleggera V4 over the previous 12 months, yet time on the family’s little brother, the V2, has eluded us—until now. It’s unfair to call the V2 “little,” considering it packs 959 cc from its V-twin motor, which produces a claimed 155 hp and 76 ft lbs of torque. However, such is the sheer force that comes with the V4 range that the V2 is very much the baby of the bunch.

The V2 started life as the 899 back in 2013, morphing into the 959 and, as of this year, now the V2. Engine capacity is as it was in 959 form, although there’s new bodywork to match the V4 (minus the wings), and a new exhaust system that gets the motor under Euro5 emissions regulations. Output has been increased by 5 hp and peaks at 10,750 rpm.

The model is graced with the same chassis as before, the monocoque that debuted on the first-generation Panigale of 2012, although front and rear suspension damping rates have been revised to add much needed suppleness to the ride. Ducati has also fitted a single-sided swingarm to the model for the first time, emulating the V4.

In addition, Ducati has implemented the Bosch Inertial Measurement Unit for the first time on the 899/959/V2 platform, opening up the electronics for the latest Cornering ABS, traction control, wheelie control, up-and-down quickshift and engine-brake control algorithms.

For the first time on this platform, Ducati has included the Bosch Inertial Measurement Unit.  Photo: Courtesy of Ducati Motor Holding S.p.A.

The 441-pound V2 is the ultimate incarnation of the legendary 916, the motorcycle that saved Ducati in the 1990s and put the company on the path it enjoys today.

The V2 slices apexes like a samurai—there are very few motorcycles in the above-900 cc segment that will take a corner like a V2. There’s less reciprocating mass from the V2’s V-twin as opposed to a V4, and with the improved electronics over the 959, the ride is as safe as can reasonably be expected.

A word of warning: you’ll want to avoid the V2 when the temperature outside revs up. Just like the old Panigale 1299, the bike runs very hot with the rear cylinder‘s exhaust blazing heat right underneath the rider. The ride position is also quite steep, so you can expect a little weight on your wrists, which will be off-putting for some, but it places you in the perfect position to attack the next corner you’re racing up to.

Despite these qualms, the Ducati Panigale V2 offers a sterling ride experience. It has the perfect combination of power and agility, as well as nearly all the required electronics (sadly, no cruise control) and, with no winglets, a classic aesthetic that’ll never go out of style. It’s a beautiful machine you’ll want to take out again and again—just not on hot days.