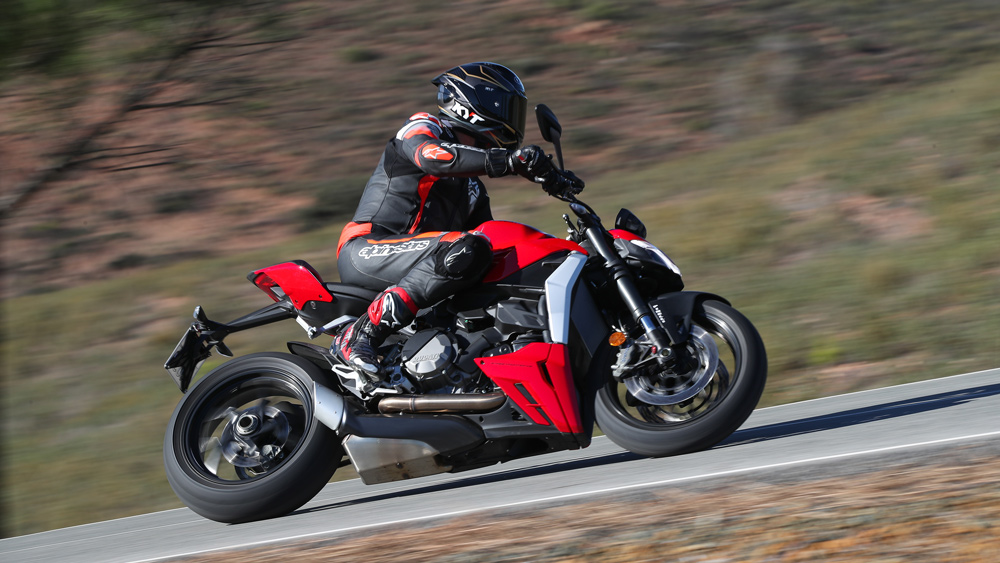 The hills surrounding the sleepy province of Huelva in southwest Spain are what I imagine a plate of spaghetti thrown over a mountain would resemble; skinny roads, smooth and undulating, draped over the landscape—a motorcycle rider’s paradise. The endless, decreasing-radius corners mated to high-speed sweepers are also paired with an occasional small jump and bird’s-eye view of some of the finest vineyards in the world. The best part? I’ve got Ducati’s new Streetfighter V2 underneath me.

Far from just being a stripped-down version of the Panigale V2, the $16,995 Streetfighter V2 has a persona all its own, despite sharing a similar spec sheet. While the Panigale is all about hunting apexes and dragging knees, the Streetfighter has a heart that belongs deep in the mountains and canyons, with a cafe at each end and perhaps a racetrack nestled smack in between.

I had just completed about 25 laps on the Monteblanco circuit prior to the road test, and although the Streetfighter’s personality was more at home in the hills, it handled track duties with ease. With 153 hp on tap from its six-speed Desmodromic Superquadro 90-degree motor, the Streetfighter V2 has a level of performance that was never in doubt, but this is still a Ducati L-twin, which means it requires a certain riding style to extract optimum performance.

With the throttle mapping set to Sport (the bike also offers Road and Wet modes), there’s a definite kick in the power delivery as the motor reveals its racetrack zeal once the magic 6,000 rpm mark is passed. From here, the revs rise quickly, as do the gear transitions via the sublime Ducati Quick Shift system. You’ve also got Ducati’s usual plethora of electronic aids (minus cruise control), like the six-axis IMU, traction control, cornering ABS, wheelie control and engine brake control. (Indeed, it would be odd for any Ducati to not have such features these days.) However, I found the intervention of some of the aids, at least on level three for traction control and wheelie control, a little too much for my liking. Dialing the settings back, and letting the Ducati be more of a motorcycle and less of a computer, brought immediate results. Fluid, tire-smearing drive was in abundance, as was a little front-wheel lofting that gave this pilot more than a few cheeky grins.

The near total lack of wind protection found on naked bike is never more apparent than on the racetrack, where top speed is usually king and rider comfort is negligible at best. But when cruising those green Spanish mountains, the Streetfighter revealed its true self—a capable canyon carver. Compared to that of sibling Panigale, the Streetfighter V2’s flatter, wider seat gives good comfort, while the Showa and Sachs front and rear suspension, respectively, prove perfectly sprung for my 190-pound weight.

With the throttle map set to Road mode, the motor’s kick was somewhat mitigated and the overall delivery of power less feisty than expected. The result, however, was a more pleasant ride, with all the performance I could ever wish for on the street.

Ducati claims a weight of 441 pounds for the Streetfighter V2, and its agility on the open road is never in doubt. Spot your chosen line, pick your exit and pour on the power to hear that glorious L-twin roar. The simple fact is that Ducati’s more intimidating Streetfighter V4 is entirely too much motorcycle for most riders. The Streetfighter V2 is a more approachable and manageable machine that still continues the great Ducati L-twin tradition.