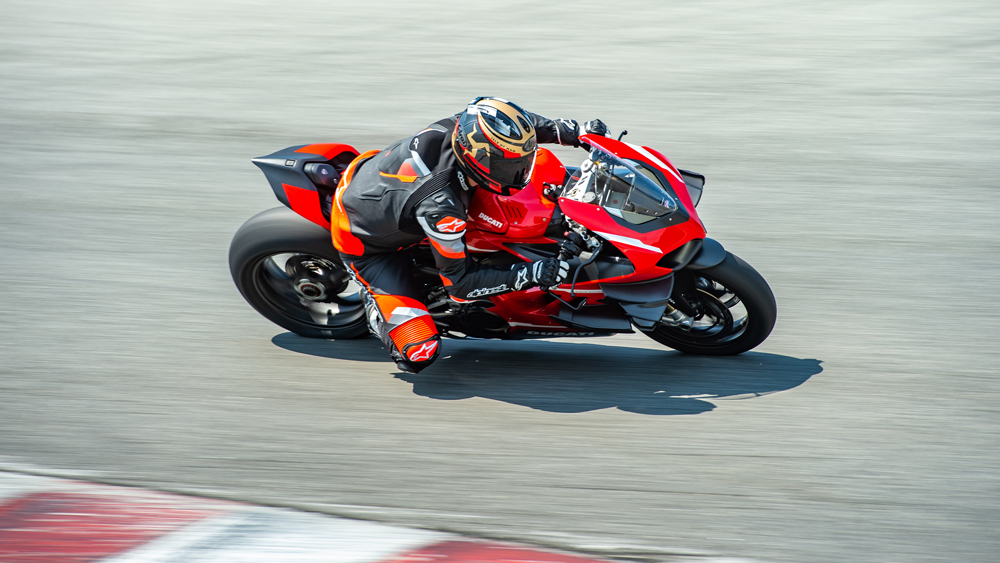 Exiting Turn Six and up the Rahal Straight at WeatherTech Raceway Laguna Seca, the zenith of Ducati’s superbike knowledge and technology is roaring away underneath me like a tiger that’s grown wings and painted itself red and black. Fitted with the Racing Kit exhaust for my 10 laps, the $100,000 Ducati Superleggera V4 displays power that goes from an already incredible 224 hp to 234 hp, and it quickly proves a case of running out of racetrack before I run out of motor.

The Superleggera V4 is ungodly fast, the kind of fast you absolutely do not need in a road-going motorcycle, but you’re so glad you have available. For the racecourse’s famed Corkscrew, I drop down two gears on the seamless Ducati Quick Shift-equipped gearbox, and the rest of the bike’s impressive features kick in.

The brakes are nothing short of superb, as Brembo has graced the Superleggera with its finest production anchors in the four-piston Stylema R calipers matched to a race-spec MCS 19.21 radial master-cylinder. A single finger is all you need for monstrous stopping power, as the brake setup produces the kind of response at the lever that makes you feel like you’ve got your hands on the brake discs themselves.

Ducati claims that when the bike is fitted with the Racing Kit, it drops 15 pounds of dry weight (Ducati doesn’t disclose wet weight) and comes in at 335.5 pounds. riding that configuration, I feel the Superleggera (Italian for “super light”) flick left and into the drop-off right of the Corkscrew so fluidly, it could be osmosis. The carbon-fiber front frame, swingarm, subframe and wheels (wrapped in sticky Pirelli Diablo Superbike slicks for our track sessions) team brilliantly with the 43 mm Öhlins NPX25/30 pressurized fork and TTX36 shock to deliver a stiff, controlled and ultra-swift direction change as the downhill left of Rainey Corner comes quickly into view.

The bend, named after Monterey’s own three-time MotoGP World Champion, disappears in a flash, as does the next right and the tight left leading onto the pit straight. Then it’s time to stand the Superleggera up, pull the throttle wide open and unleash beautiful hell once more.

This is the kind of experience you will have if you’re one of the lucky 500 people worldwide who has put down $100,000 for a Ducati Superleggera V4. This is the finest superbike Ducati is capable of manufacturing to date. It’s lighter than the factory WorldSBK racer, almost as powerful and comes with revised settings for every one of its many electronic parameters—from traction-, wheelie- and slide-control systems—and presents the option for a dash based on Ducati racer Andrea Dovizioso’s MotoGP unit.

The Superleggera’s carbon-fiber biplane winglets produce more downforce than Dovizioso’s current MotoGP racer. Modeled on his race bike from 2016, when MotoGP aerodynamic rules were less controlled than today, the Superleggera produces 110 pounds of vertical load at 167 mph, a figure that improves to 134 pounds once you reach 180 mph. It’s like having a fat Labrador dog sitting at the front of the bike. The result is far less tendency to wheelie than even the winged Ducati Panigale V4 R. This means the electronics cut in less, which allows you to stay on the power longer.

I notice this on the run up to the Corkscrew more than anywhere else at Laguna Seca. As the Rahal Straight flattens out, the V4 R wants to launch skywards, whereas the Superleggera stays beautifully composed with drive almost entirely uninterrupted.

The Superleggera’s standard dash, although the option to have one modeled from racer Andrea Dovizioso’s MotoGP example is also offered.  Photo: Courtesy of Ducati Motor holding S.p.A.

But more than any one component in this technical tour de force, what truly amazes me is the way every facet of the Superleggera blends with the other to deliver an experience that no other production motorcycle with a license plate can match. There are purpose-built race bikes that should be faster around Laguna Seca but, for a production motorcycle, the Ducati Superleggera V4 has set a new standard for outright performance, technical innovations and downright delight.