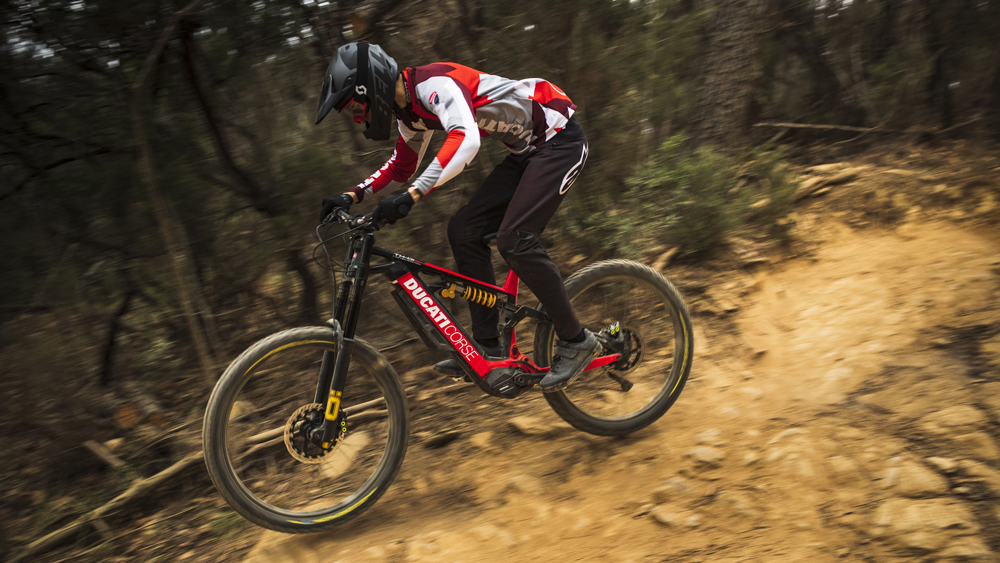 Widely reported research by the Light Electric Vehicle Association revealed that more Americans purchased electric bicycles than electric cars in 2021. This year, as e-bike sales look set to eclipse the million mark, that statistic may hold true yet again despite an increasing number of affordable EV models entering the mainstream automotive marketplace.

Holding up to the aggressive style of Ducati’s DesertX adventure motorcycle, the ​​TK-01RR e-bike pairs an electric power train with all the best mountain-biking components to create an enduro-style off-roader complete with full suspension, massive tires and plenty of juice to power up the biggest hills with ease.

Ducati’s TK-01RR Limited Edition adds a bevy of carbon fiber to the aluminum-framed bike built in partnership with Thok, though the Shimano-sourced EP8 electric motor and 630 watt-hour battery remain the same as those in the standard TK-01RR. With Eco mode selected, a full charge results in a claimed range of 110 miles. Trail and Boost modes increase the bike’s assist wattage significantly, while also decreasing range to 55 miles and 36 miles, respectively.

Shimano also contributes a smooth-shifting Di2 XT electronic groupset with 11 pedaling speeds, to which the electric power-train configuration can only lend help; no full throttle without putting in the work here, unlike many Class 2 e-bikes that allow for so-called “race only” settings (thereby skirting most e-bike laws). But rest assured that when all 62.7 ft lbs of torque engage in Boost mode, steep climbs and the assisted top speed of 20 mph feel nearly effortless.

In Eco mode, the Shimano motor pumps out just enough juice to make the model feel as light as a regular mountain bike, requiring only minimal labor to reach the summit of, say, a 1,500-foot climb. And an easier time going up the hill saves energy for more fun on the descent, where this e-enduro truly shines.

While hauling down steep gravel grades, the upgraded Öhlins DH38 fork and TTX rear spring shock simply gobble up bumps, rocks and small jumps thanks to 180 mm of travel up front and 170 mm at the rear. The smooth ride quickly inspires a descent pace that might feel too risky if not for the knobby Pirelli Scorpion tires and some of the largest disc brakes ever fitted on an e-bike—massive Magura MT7s derived from motorcycle applications.

Yet even with the Limited Edition’s upgraded carbon-fiber Crankbrothers Synthesis wheels, Fizik saddle and Renthal carbon-fiber handlebars, this bruiser still tips the scale at right around 60 pounds. And no matter how much the battery assist helps to keep quads and calves feeling fresh on climbs, that heft rears up when hopping over deeper ruts or negotiating tight single tracks, so sticking to wide-open fire roads and trails quickly becomes the name of this Ducati’s downhill game. Just lower that 170 mm dropper seatpost and fly.

Ducati ships the TK-01RR with a 110 volt charger that easily tops up the battery overnight, even after a long day in the saddle. And to be fair, riders with the fortitude to fully deplete all 630 watt-hours of charge in Eco mode probably won’t be shopping for an e-bike like this in the first place. The Limited Edition still lacks features like a built-in power meter or intelligent inertia valving to firm up the suspension for improved on-road riding dynamics. But, clearly, Ducati never intended the TK-01RR Limited Edition to cater to the more hardcore end of the enduro MTB market.

For the TK-01RR Limited Edition, Ducati adds a bevy of carbon fiber to the aluminum-framed bike built in partnership with Thok.  Alessandro Belluscio, courtesy of Ducati.

Instead, this e-bike was developed for the rider who wants to both stand out from the crowd and get away from it all. And the copious carbon fiber, iconic red paint and unmistakable badging help—even when caked in dirt. Priced at $10,995 and comprising only 169 examples, the Ducati TK-01RR Limited Edition presents a slim enough package that other riders might not even recognize it as an e-bike—until, of course, they suddenly find themselves eating dust, dropped at the first kicker of every steep climb.