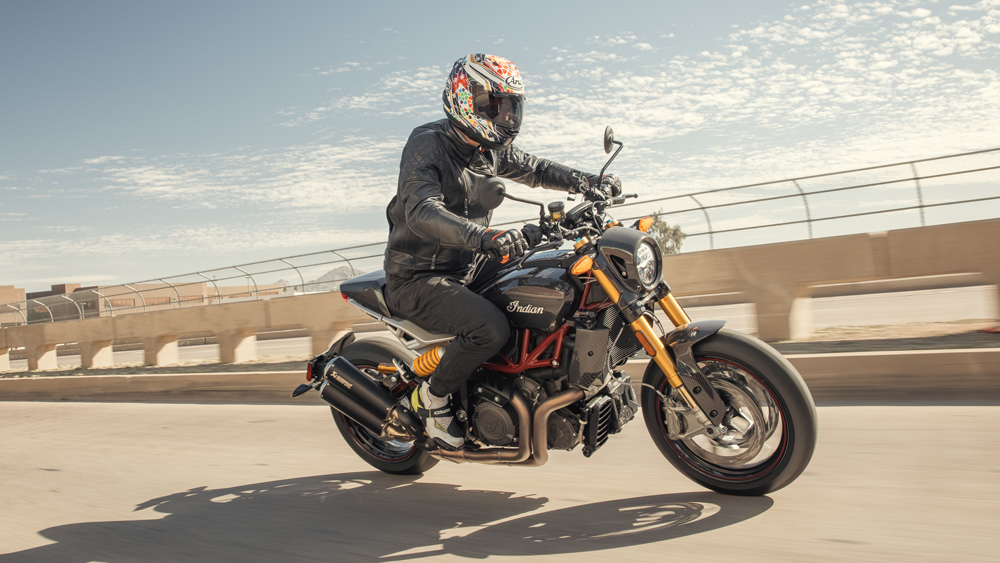 We all need to grow up eventually. Some do so more successfully than others and become fully fledged members of society, content to follow the curve set by those before them. Others, however, grow up without losing the rebellious, independent nature they had in their younger years. This applies equally to motorbikes. As far as the latter goes, Indian Motorcycle‘s FTR model for 2022 is a case in point.

Debuted in 2018 as the FTR1200, the model burst onto the naked-bike scene and stuck a middle finger squarely up at the segment’s establishment dominated by Japan and Europe. It did this with a fresh take on the class’s minimalistic design, a raucous 1,203 cc V-twin and funny sized wheels—a 19-inch front and 18-inch rear configuration wrapped in dirt track–inspired Dunlop DT3 rubber.

The FTR1200 made a huge impact when it arrived, but the size of the wheels hampered the rider’s ability to choose different tires; the Dunlop’s aesthetic and semi-off-road style meaning the Indian would get quickly left behind the rest of the class that had 17-inch wheels and any number of super sticky tire choices. For 2022, Indian made the decision to ditch not just the “1200” portion of the moniker but also the wilder wheels for more standard 17-inchers covered in Metzeler Sportec M9 RR rubber.

The FTR is a four-strong lineup that comprises the $12,999 base model, the $14,999 FTR S, the $16,999 FTR R Carbon and the $11,999 Rally version (still with the 19/18 wheel sizes). Indian Motorcycle threw us the keys to an FTR R Carbon for testing in the Arizona desert recently, and what we discovered was that, although the FTR has become more refined, it’s still a bit of a brat at heart.

As the name suggests, the R Carbon variant is cloaked with the woven black exclusiveness from front to back. Carbon tank shrouds, front and rear guards and headlight nacelle are all present, and there’s a lovely pair of gold Swedish forks and shocks from Öhlins—both fully adjustable—to replace the Showa units of the bike’s first generation.

The ride quality has improved drastically. Although the rear suspension still pivots directly off the swingarm, the higher quality Öhlins make for a far more enjoyable ride. This combines with a tire setup that simply craves corners and has far greater stability than the Dunlop’s could have given the FTR. The Indian now turns with equal amounts of speed and stability, whereas before, it was just the former.

Indian Motorcycle’s engineers have also delved into the electronics to smooth out the often-criticized initial throttle response that felt jerky. You still get Sport, Standard and Rain ride modes, all accessible by the 4.3-inch TFT touchscreen display, but after testing out Sport, I quickly settled for the more sedate Standard mode. This gave a near-perfect mix of acceleration and punch without feeling like you’re firing a gun each time you crack the throttle from fully closed.

The 120 hp on tap is ideally suited to a machine weighing a claimed 482 pounds (minus fuel and oil), and there’s enough power to keep you interested, no matter what your ride level may be.

The model will thrill at every level of rider ability.  Photo by Jordan Pay, courtesy of Indian Motorcycle International, LLC.

A nice addition is that cruise control is now standard on the FTR, something that usually needs to be purchased as an aftermarket extra. Although it’s easy to lament the fact that the FTR has lost some of its adolescent angst due to the fitment of the 17-inch wheels and improvements to the motor and electronics, it still retains much of the aura that made it so appealing when introduced and is now a far better motorcycle. The FTR R Carbon is still about as individualistic as you can get in the category—consider it punk rock on two wheels, but with its volume of attitude turned down a touch.