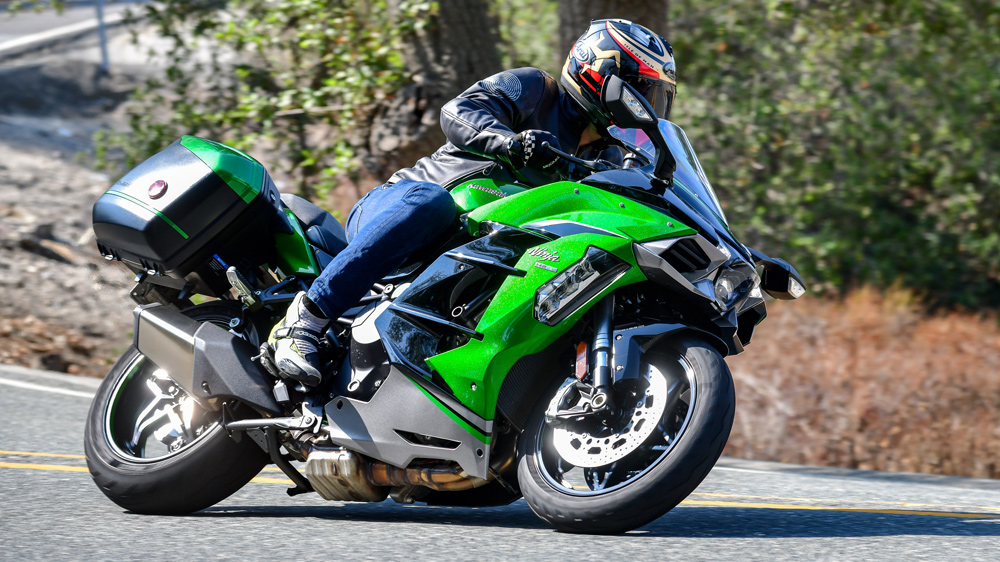 It’s always nice when you get thrown a bit of a surprise when testing new motorcycles. I’ll admit to not expecting a great deal from the Kawasaki Ninja H2 SX SE+, simply because my previous experiences with Kawasaki’s supercharged motor in the H2 sportbike and the naked Z H2 were inconsistent, being either scary or splendid. It was a relief to see that Kawasaki may have just found the sweet spot with the sport-touring version, so much so that this machine has shot very near to the top of my personal list for bike of the year.

The Ninja H2 SX SE has been around since 2018, but this is the first time I’ve managed any decent time on it aside from an afternoon ride. And it happened to be the SE+ edition, complete with KYB semi-active electronic suspension. Kawasaki largely reinvented the high-speed travel segment with the 2008 Concours 14 that we featured as one of the 25 greatest motorcycles of the 21st century, but it was definitely a machine for the elder statesmen of the riding community. The Japanese manufacturer started to change this philosophy with the H2 SX—here was a bike that looked like a superbike, but with bags strapped to the back. And its supercharged inline four-cylinder motor packs a level of performance that most can only dream of.

The new H2 SX SE+ is by far Kawasaki’s priciest sport-touring machine at $25,500, which represents a $9,500 increase over the Concours. However, the spec sheet speaks for itself. The bike has close to 170 hp (depending on your dyno operator); a Bosch Inertial Measurement Unit that mitigates traction control, wheelie control, and cornering ABS control; KYB semi-active electronic suspension with customizable modes; Brembo monobloc four-piston front brakes; LED main and cornering lights; cruise control; smartphone connectivity for navigation mirroring and call operating; and optional 7.3-gallon hard case luggage.

A bit odd, however, is what you don’t get. Aside from the fact that the luggage (something a bike like this sorely needs) does not come standard, the indicators are not self-canceling and the screen angle is fixed, which can be annoying if you’re not the ideal height.

Take those gripes out of the equation, though, and you have a motorcycle of monumental proportions for high-speed touring. Kawasaki has pulled quite a trick with the H2 SX SE+ in that it is so stable, so at home at moving swiftly that it doesn’t actually feel that fast. I’ve tested plenty of other machines this year that made me think I was about to be blown off the back at half the speed of Kawasaki’s stable green bullet.

Available as an option, the 7.3-gallon hard case luggage should really be a standard feature.  Photo by Peter Jackson.

The performance and manageability is more impressive considering the model’s claimed weight of 577 pounds with a full 5-gallon gas tank—far from a featherweight. Yet you do need to treat slow corner entries with a degree of respect as the chassis can feel a little top heavy when loaded with fuel, rider and luggage, let alone a passenger. Despite this, the cornering prowess of the bike is brilliant. It will hold its chosen line with ease and can be coerced into fast direction changes with a bit of forward thinking. Where it’s most at home is medium- to high-speed mountain roads (or Southern California’s 405 freeway), gliding from bend to bend and letting the electronic KYB suspension soak up the pavement.

The 577-pound bike carries a supercharged inline four-cylinder motor with about 170 hp.  Photo by Peter Jackson.

If the Kawasaki Concours 14 is aimed at riders who want to cover a massive amount of miles quickly but in comfort, the H2 SX SE+ is for those who owned a Kawasaki ZX-10R in their youth and aren’t quite ready to make the full switch to the Concours life. Think of this variant as the two-wheel cousin of a BMW M760i xDrive and you begin to get the picture (it’s a little too big for BMW M5 comparisons). This is a luxury vehicle capable of more than a few pleasant surprises. Best of all, you’ve got that intoxicating supercharger rattle accompanying your every ride.