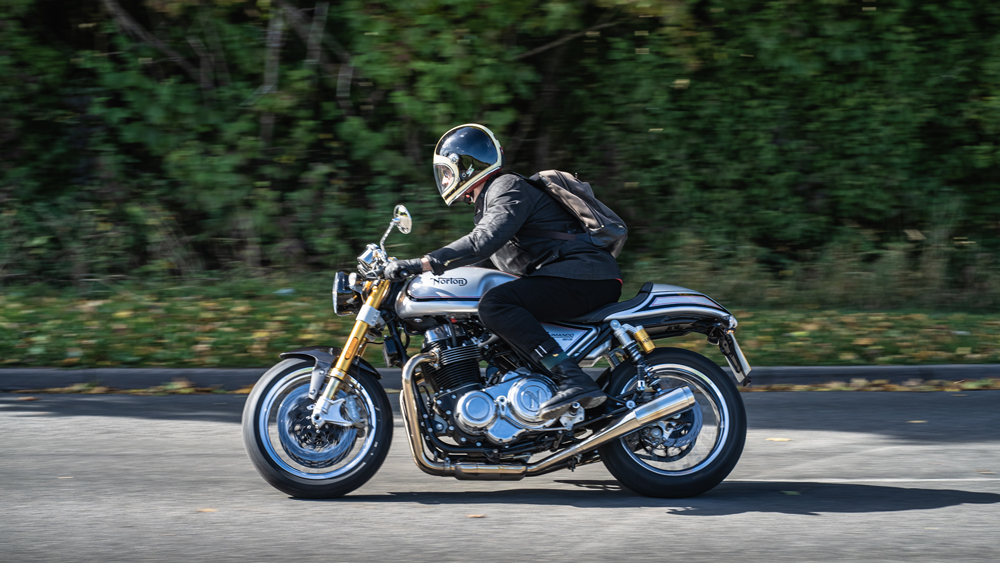 Throughout its 124-year history, Norton hasn’t been afraid to innovate when it comes to its motorcycles. There was the “featherbed” frame that the company patented in 1949, which was renowned for its lightweight build and excellent handling qualities. And then there was the original Commando, introduced in 1967.

The British twin-cylinder bikes of the time were known for the intense vibrations they caused, a trait made to feel increasingly antiquated by the technologically advanced, mass-produced machines coming out of Japan. Norton’s solution with the Commando was to change the way the engine was mounted to the frame, using rubber buffers to cushion it and absorb the vibrations, transforming the handling and all-around comfort. It helped put British motorcycling back on the map and, during the bike’s decade-long tenure, more than 55,000 people were convinced to buy one.

It might seem strange then that the latest model, the new Commando 961, does not visually appear to add any innovation to the prior generation released in 2010. In fact, it looks almost identical. But there’s a reason for that. This bike isn’t about breaking new ground so much as fixing everything that was wrong with the last iteration. It’s predecessor, like everything else associated with Norton since 2008, was embroiled in the controversy surrounding ex-CEO Stuart Garner and his pension-fraud scandal. The impact on the company was reflected in poor build quality and unfulfilled orders. Now owned by India-based TVS, the brand is set on getting everything back in tune. And it seems to have done so, building a new state-of-the-art West Midlands factory in which all Nortons are made by hand. This includes the V4 super sport model, and now the Commando 961.

“How it looks was never the problem,” says John Hogan, Norton’s new head of communications, about the Commando. “We’ve completely reengineered the Commando, from top to bottom, which is what had to happen. You can’t see the amount of work that’s gone into the transmission, for example. On the old version, there were a lot of issues, and sometimes not as many gears as there should have been. It’s been entirely reworked. If you line up both bikes next to each other, you’d probably struggle to tell what’s going on. But if you could turn them inside out, you’d notice it immediately.”

Christian Gladwell, Norton’s chief commercial officer, tells the same story. “We’ve spent two years and countless millions in taking over 350 parts, and, even though they look the same, making them out of better materials and to a far higher level,” he says.

This all becomes apparent when you throw a leg over the new bike, which is being produced in two versions. The SP specification has upright handlebars for a more relaxed riding position, while the CR (cafe racer) features distinctive clip-on bars that present more motorsport-inspired ergonomics.

I test the latter, and it takes a second to get used to the aggressive, low-slung stance. While the CR variant does not feel as practical or as easy to ride through town as the SP, its clip-ons just feel right for the bike. Fire up the air-cooled, parallel-twin motor and it burbles to a reassuringly bassy rhythm, letting you know that all 76 hp is immediately ready and waiting.

After giving the throttle a short blip, I realize that this is where I want to be every Sunday morning. The engine gurgles and splatters at idle in a way that’s lost on other modern bikes, and when on the move it begs me to go faster. Its ever-present baritone hum wills me on towards a horizon I don’t want to reach.

The Commando 961 is a simple thing. There is no selection of various ride modes like many of its competitors and, while it has ABS, there is no traction control. It has proper dials and, when cold, requires you to give it some throttle in order for the engine to really come to life. Yet it does make use of some serious hardware. The top yoke, handlebar clasps and footpegs are all made from aerospace-grade billet aluminum. The front mudguard is carbon fiber and the transmission cover and exhaust system are made—and polished—by hand. The fuel tank’s sculptural indents taper aggressively, like the waist on a bespoke dress shoe, while the stitching on the leather seat would rival that done by a Savile Row tailor.

All this is incredibly impressive and entirely unnecessary. And it makes me want one. It’s a similar feeling to holding a Leica M, which lacks the advanced tech of cameras half the price, but boasts the mechanical build quality of a bolt-action rifle. Click the shutter and you can feel the decades of engineering that have gone into making it feel just as good as it performs. For a period, Norton may not have had that level of craftsmanship, but the first impressions of the new Commando suggest a return to form. There will be time for more innovation, with the brand set to launch its first electric bike by 2024, but, for now, the endeavor of restoring a storied legacy is something worth celebrating.

Click here to see more photos of the Norton Commando 961.