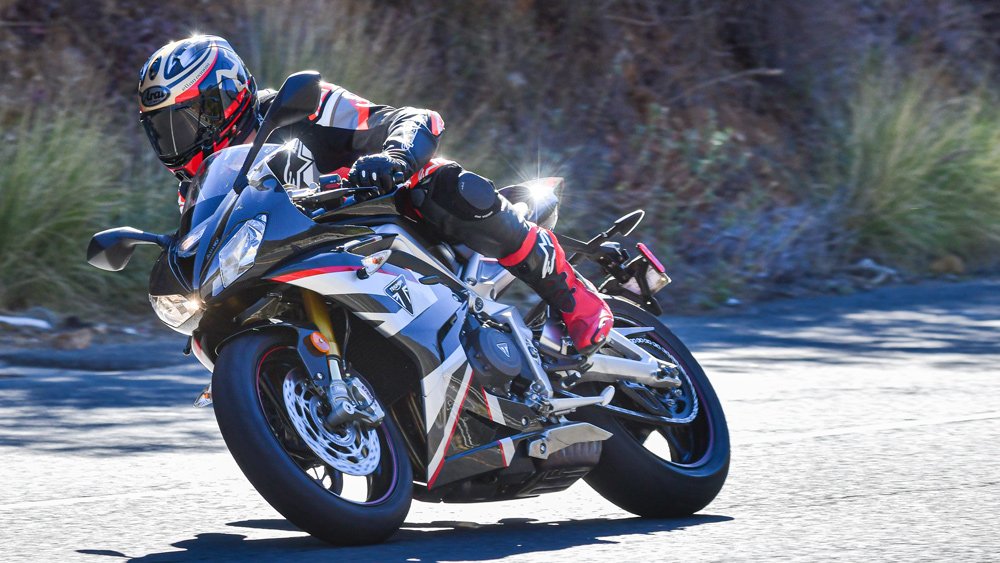 If you ride high-performance motorcycles long enough, you start to recognize if a given machine will fulfill your expectations within three corners. It doesn’t happen often, but when it does, well, that’s a glorious feeling. And within those three corners between my driveway and my favorite local backroad, I can instantly tell that the Triumph Daytona Moto2 765 beneath me is a very special steed.

Priced starting at $17,500, the bike is limited to 765 examples for the North American market, along with 765 examples for the rest of the world, and is the highest specification Triumph Daytona ever to see the light of day. It’s also the first motorcycle to be licensed by Dorna, the holder of MotoGP commercial rights.

The model’s presence warrants your stare. There’s no provision for a passenger, and the carbon-fiber bodywork that envelops every corner of the motorcycle seductively invites alone time. The carbon conceals a 128 hp, 765 cc inline three-cylinder motor developed as the control engine for the Moto2 World Championship—the series where the world’s best up-and-coming riders go to prove their wares in the hopes of landing a spot in the MotoGP spotlight.

The motor isn’t quite as high-spec as those on Europe’s Grand Prix circuits, but it’s still impressive in its performance nonetheless. Complete with a gorgeous Arrow titanium muffler, the Daytona will pull hard from as low as 3,000 rpm to a screaming 13,500 rpm redline. At those engine speeds, the cacophony of sound fills your ears and, for a second, you could be forgiven for thinking the world is one big racetrack.

The bike will be limited to 1,530 examples, with half going to North America.  Photo by Alessio Barbanti, courtesy of Triumph Motorcycles Ltd.

Fitted with a close-ratio, race-style gearbox mated to the Triumph Shift Assist up-and-down quick shifter, the Daytona’s gear transitions are nothing short of sublime—the best of any production motorcycle I’ve ridden in the last year. The lever throw is short, and the gears instantly mesh in that wonderfully precise racing fashion. Little things like that matter.

But the quick shifter is only one part of the electronics suite that includes five riding modes, traction control and ABS, all accessed via the little mouse switch on the left handlebar. Triumph has been a leader now for a few years in the user-interface experience, going back to the Street Triple 675 of 2017. The Daytona takes things a step further, with easy access to the information you need at a glance and nothing you don’t. It’s an element of the ride experience that some of the competing manufacturers have yet to master.

Triumph’s latest Daytona offers all the information you need at a glance.  Photo by Alessio Barbanti, courtesy of Triumph Motorcycles Ltd.

Along with the excellent electronics, the chassis and suspension are equally brilliant. With handling delivered by Öhlins in the form of its NIX30 fork and TTX36 shock, and running front Brembo monobloc brakes squeezed by a racing-style Brembo MCS radial master-cylinder, the Daytona is a precision tool at your command. On our scales, the lightest Daytona to date comes in at 409 pounds ready to ride with a full 4.6 gallons of gas, and it carries that weight so well in the corners that it feels like it weighs 50 pounds less.

The Daytona will pull hard from as low as 3,000 rpm to its 13,500 rpm redline.  Photo: Courtesy of Triumph Motorcycles Ltd.

Again, the model’s attributes become apparent within seconds of climbing on board, proving this stallion is as much about go as it is show. And then there’s lovely aesthetic touches everywhere. From the exquisite machining of the top triple clamp to the way the cockpit edges are cloaked in carbon, the silver silhouette of the British Union Jack, this is a marvelously executed motorcycle, and one that will absolutely become a collector’s item in the future.