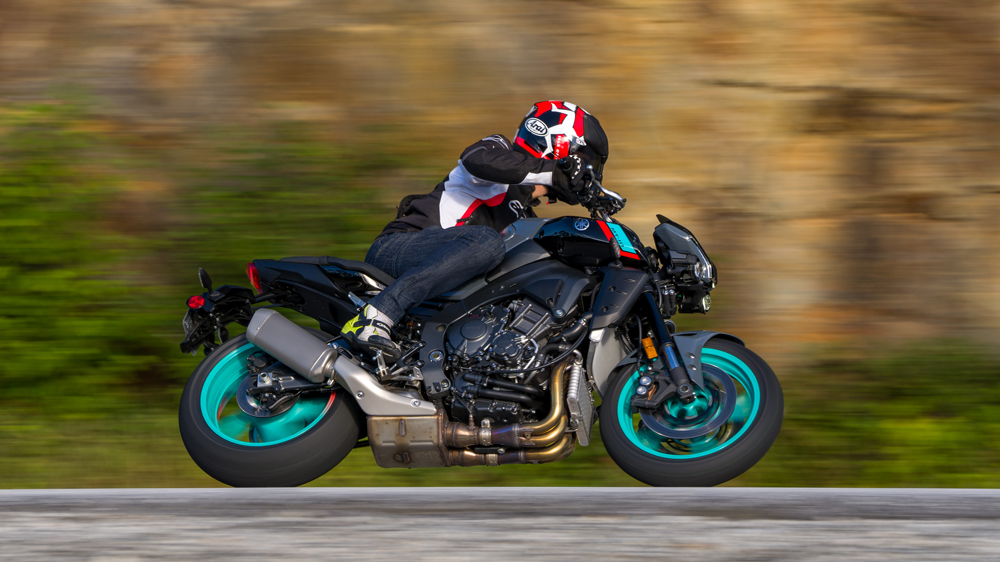 Yamaha has always been good at the value-for-money game, especially when it comes to its street naked-bike range. The manufacturer’s MT lineup, three strong with the MT-07, MT-09 and this MT-10, offers exceptional performance levels at an exceptionally fair price. And this model year marks the first time Yamaha has paid any real attention to its MT-10, now priced at $13,999, since the bike debuted back in 2016.

Known as the FZ-10 until 2018, the model cannibalized the Yamaha YZF-R1S—a bike for the US market only—for the majority of its parts. It used steel instead of titanium for the conrods and valves, had a lower rev ceiling and slightly less horsepower. In other words, it made for a watered-down superbike, but an awesome naked bike.

For 2022, Yamaha has largely kept the MT-10’s chassis and engine as it was, but has fitted a new electronic throttle aimed at better mimicking the feel of old-school cable and carburetors, something of a holy grail now for manufacturers in this age of emissions-restricted, fuel-injection motorcycles. The main changes that have been introduced on the MT-10 are found in the electronics and bodywork. The former is designed to make the bike nearly identical to the R1 superbike in terms of adjustability, while the bodywork modifications have been done to reduce the seemingly acres of plastic that adorned the original model, allowing it to now be something a little more svelte and, well, naked.

As for the electronics, the fitment of a six-axis Inertial Measurement Unit (IMU) has allowed the engineers to bring the MT-10 into the modern age with ABS that’s lean-angle sensitive (cornering ABS). Also on board are traction control, wheelie control, engine brake control, and two-stage brake control—a feature that, in the BC2 setting, uses IMU data to increase ABS sensitivity as the bike’s lean angle increases.

There are four different power modes for you to choose from, level one being the most direct and level four in case you’re riding in the rain. These go handily with the four modes offered by the engine control unit (ECU), all with their own traction, slide, wheelie, engine brake, and brake control values preset from the factory—ones you can vary individually if you desire. There’s also an up-and-down quickshifter. All of this makes the MT-10 the most specced-up machine at its price point in the category.

There are four different power modes that pair handily with the four modes offered by the engine control unit.  Joseph Agustin, courtesy of Yamaha.

As for the bodywork, the front end has been slimmed dramatically with new headlights and funky “eyebrow” daytime running lights. In addition, the side panels have been reduced in size, the gas tank is slimmer at the knees and the seat (which is now a touch taller at 32.8 inches), and the bike has new contours and a reshaped passenger perch.

The R1-derived motor is a 999 cc inline-four, but it doesn’t have the outright performance of, say, the Ducati Streetfighter V4 S or BMW‘s  S 1000 R. This, in my opinion, is a good thing.

The MT-10 is more approachable in how it makes its power, how it delivers that output to the rear wheel and the noise you hear. The new MT gets a revised intake and exhaust system aimed at making one of the already best-sounding bikes you can buy now sound even better; its song was utterly glorious when bouncing off the mountain walls on our test ride through Asheville, N.C., giving a gruff yet unmistakable sonic signature that’s properly addictive.

The front of the Yamaha MT-10 has been slimmed dramatically with new headlights and daytime running lights.  Joseph Agustin, courtesy of Yamaha.

The suspension is largely untouched in terms of what it was in 2021, and the ride is a little on the harsh side when the machine is used for general commuting. Switch focus to sports riding, though, and the tightness of the chassis makes more sense. Yet this is still a naked superbike, so you always need to be on your toes. Fortunately, the ride position is comfortable for spending all day in the saddle, and, while Yamaha’s MT-10 may still not win any beauty contests, the increased focus on electronics makes this one of the best motorcycle values on the market.