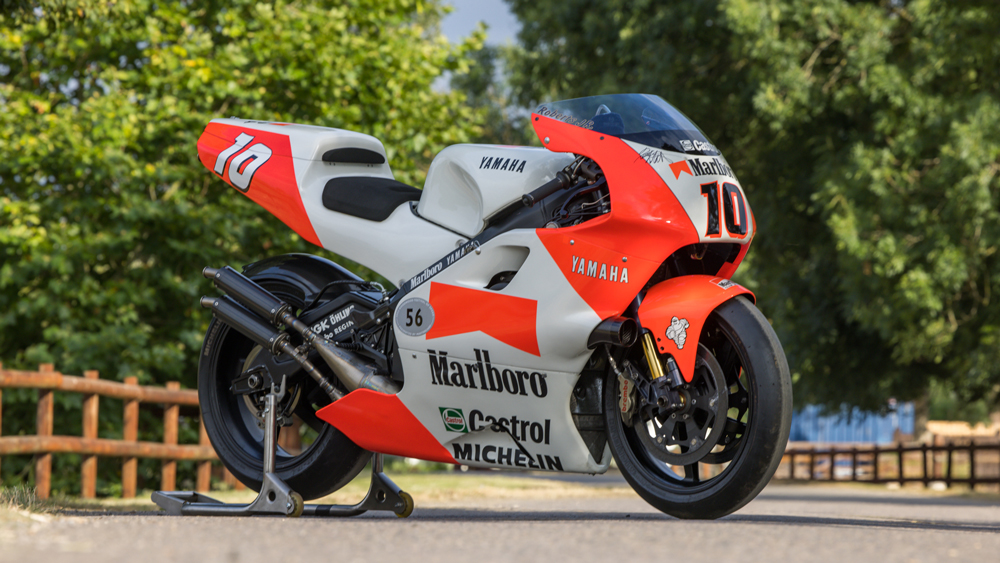 The 500 cc period of MotoGP competition is regarded by many as the sport’s golden era, a time when the world’s best riders had to fight unruly two-stroke beasts with zero electronics and up to 200 hp at the tire. It was also the time in which the US was a global force in Grand Prix contests, with four different stateside riders becoming the 500 cc World Champion between 1980 and 2000.

Fittingly, that era started with the last of three title victories for the great Kenny Roberts and was bookended by his son, Kenny Roberts Jr, who took the 2000 championship on the factory Suzuki. However, before the young Roberts ascended the throne, he raced the previous decade for his father’s team, which ran the factory Marlboro Yamaha outfit from 1990 through to the end of 1996, when the elder Roberts took the unprecedented step of creating his own machine named the Modenas after falling out with Yamaha.

All of that backstory plays to the importance of this 1996 Yamaha YZR500 OWJ1, the final factory Yamaha to be run by Roberts. It was also the first to be ridden by his son who, after graduating from the 250 cc category, rode it to a season-best finish of fourth at the 1996 Czech Republic Grand Prix.

Now, Rick Degan and his team at RMD Motors, are offering the provenance-rich Yamaha for $400,000. For decades, Degan has been the go-to guy when it comes to getting some rare gems out of Japan, however, this particular Grand Prix motorcycle comes from the personal collection of Kenny Roberts himself, having sold it to Degan a few years prior.

A decal of authenticity remains fixed fast to the bike.  James Beck, courtesy of RMD Motors.

“When I sold the bike to the current owner in the UK three years ago, he went through the bike top to bottom,” Degan says. “The suspension was reconditioned, the engine has been rebuilt and it recently went through some more maintenance before Kenny Roberts rode the machine up the hill at the 2022 Goodwood Festival of Speed. It’s in perfect running condition, although there are no spares that come with the purchase.” And according to Degan, RMD Motors is able crate the bike and have it shipped by sea or air.

There’s another interesting US connection with this motorcycle that extends beyond the rider and team owner. Legendary American tuner and racer Bud Aksland developed his own cylinders, pistons and various engine internals for Marlboro team riders Kenny Roberts Jr and Jean Michelle Bayle. The team’s third rider, Japan’s Norifumi Abe, rode with a different specification of engine mandated by his contract with Yamaha Japan, whereas the other two were free to run whatever specs they wanted. That meant that their machines were often faster and produced more horsepower than Abe’s, a fact that didn’t sit so well with Yamaha Japan, as one would expect.

Says Degan, “This is an extremely rare piece. Factory Japanese 500 cc Grand Prix motorcycles rarely come up for sale, and it would make an incredible motorcycle for the right collector.”

Click here to see all the photos of the 1996 Yamaha raced by MotoGP champs and now for sale.