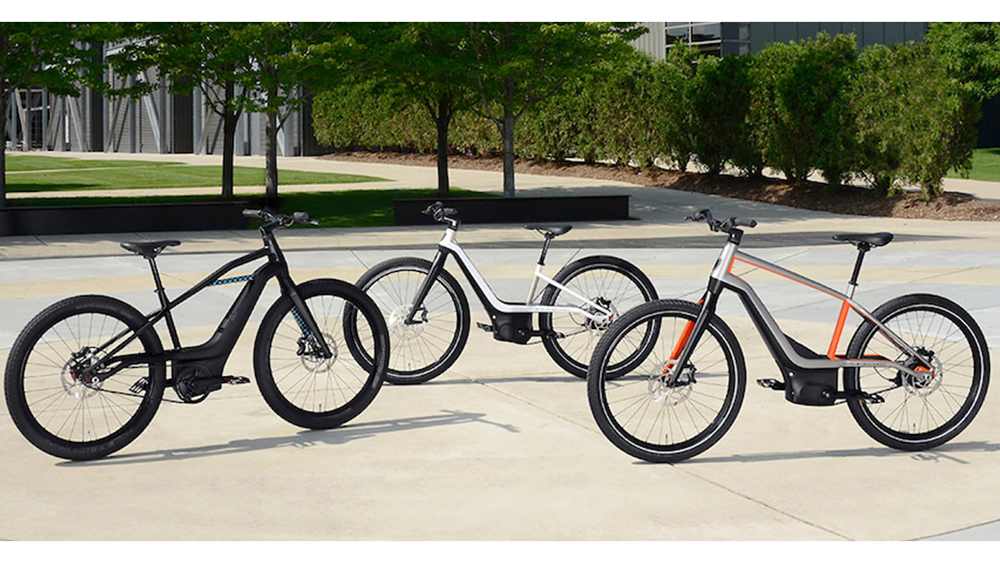 It’s hard to image Peter Fonda and Dennis Hopper trading their custom Harley-Davidsons in Easy Rider for electric bicycles. Indeed, for more than 100 years the Milwaukee-based manufacturer has been synonymous with long-haired, wild-eyed, bandana-wearing expressions of bad boy cool and, of course, grunty two-wheelers. But the company is rolling onto greener pastures, with a new line of eBikes.

According to the Harley-Davidson site, the three electric pedal-assist bikes are “light, fast and easy for anyone to ride.” Though it doesn’t specify performance specs, the prototypes appear to be fully fleshed out, road-ready rides rather than 3D renders or concepts. The bikes look to be sporting multi-speed rear hubs, a belt drive instead of chains, disc brakes and electric motors that sit above the pedaling mechanism. The svelte design sees the batteries held within the frames and one bike has no upper frame spar, allowing for an easy step-through mounting.

The 116-year-old nameplate has been toying with EV concepts since 2014 and earlier this year it turned off its fuel-burning V-twin engines and launched its first-ever battery-powered motorbike: the LiveWire. A far cry from Harley-Davidson’s heavyweight hogs, the swift and (mostly) silent ride was designed for the future with a slew of digital features, like Bluetooth connectivity, navigation and music settings that are displayed on a screen.

The dramatic departure from the reverberant machines of yore is in part due to the company’s ongoing slump in sales. Harley-Davidson no longer has the reach it once did, and Easy Rider definitely doesn’t have the pull. Younger generations don’t want to splurge on a fuel guzzler, so the company has made a seismic shift in order to appeal to environmentally conscious riders. In fact, the company states on its website that it’s “actively working to inspire a new generation of two-wheeled riders around the world.”

Harley-Davidson has not specified when the new e-bikes will arrive, nor given any possible pricing. And a disclaimer on the site warned that “Production model features will vary.” Still, we’re buzzing for the debut of the new electric additions.