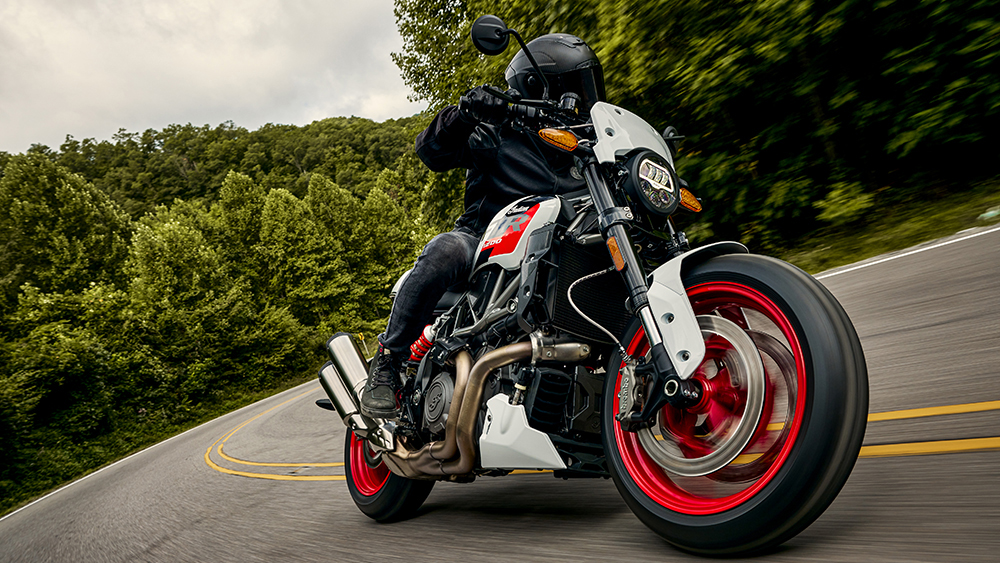 When it comes to high-powered naked bikes, say, those over 1,000 cc, the Indian FTR line stands alone as the only US-made models available on the market. It’s a fact that the Minneapolis-based manufacturer is more than proud of as it takes the fight to Europe’s BMW S 1000 R, KTM 1290 Super Duke R and such motorcycles from Japan as the Yamaha MT-10 and Suzuki GSX-S1000.

As the FTR was given a substantial renewal just last year, it comes as a bit of a surprise that Indian Motorcycle would be touching its golden goose at all for 2023. But we’re not complaining, especially considering the latest variant, the 2023 Indian FTR Sport. It’s a bike that sits on the middle wrung of the FTR ladder behind the R Carbon and ahead of the FTR Rally and base FTR.

Each bike in the lineup is powered by the same 1,203 cc V-twin that pumps out 120 hp, but the new year will see new styling and colors for the FTR Sport, as well as a few choice performance modifications to help America’s lone ranger compete against the aforementioned competition.

Heading the Sport’s list of enhancements is a new four-inch TFT display utilizing Indian’s Ride Command technology that allows for turn-by-turn navigation and pairing to the rider’s phone. There’s also a new clutch for smoother takeoffs from the traffic lights and better performance under hard acceleration. In addition, the front brakes have been altered slightly with a new backing plate and different pad material for better initial bite when the lever is pulled, which will also make modulation easier, especially when pushing on track.

And while the engine itself remains unchanged, all four FTR models debut a sports exhaust system that offers a little more bark to match the bite. Indian, however, has not said if this new configuration bolsters output at the tire. Finally, the most obvious change between this and the closest 2022 iteration is the new color schemes of Black Metallic and White Lightning with Indy Red, as well as red wheels and the new number board that draws away from the flat-track aesthetic we’ve seen in recent years and angles the design more toward road racing.

The FTR made quite a name for itself in the premiere of the MotoAmerica Super Hooligan race series in 2022, as Indian’s team rider Tyler O’Hara bested KTM’s Andy DiBrino in a final shootout at Laguna Seca for the championship. We’re looking forward to our own saddle time in the new FTR Sport come February.