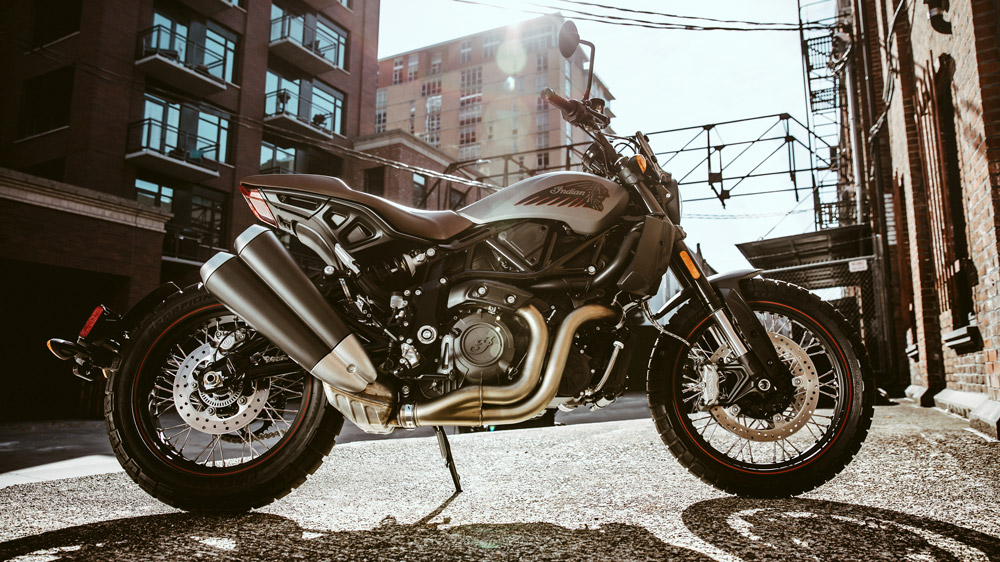 Introduced at EICMA, Italy’s prominent motorcycle show, in November, the 2020 Indian FTR Rally is now available to US buyers. The bike takes the already compelling FTR 1200 and infuses it with a retro, scrambler-inspired look. Comparing the FTR Rally and FTR 1200 side by side, the changes are subtle but effective.

The most noticeable difference is the color scheme. The tank is decorated in a subdued, yet strong-looking Titanium Smoke matte finish. The FTR Rally’s paint makes the bike appear much more mature and premium than the standard FTR 1200 in Thunder Black. Complementing the titanium scheme is a brown aviator seat mounted above a brushed stainless-steel exhaust system, which you can upgrade with Akrapovič components if you like to be heard before you’re seen.

Other touches include a rally windscreen, LED headlight and turn signals and handlebars that sit 2 inches higher for improved comfort. Those lifted handlebars connect to a suspension that offers 5.9 inches of travel. The FTR Rally’s inverted front forks match up with a pair of radially mounted, 320 mm Brembo disc brakes. A single 260 mm Brembo disc slows things down in the rear. Oh, and ABS comes standard. Pirelli Scorpion tires wrap around aluminum wire wheels with stainless-steel spokes that finish off the premium look.

The tank is decorated in a Titanium Smoke matte finish.  Photo: Courtesy of Indian Motorcycle.

The FTR Rally should go down the road with as much authority as its appearance suggests, thanks to a stout 1,203 cc V-twin packing 123 hp and 87 ft lbs of torque. All that grunt is managed through a six-speed transmission aided by a slipper clutch that feeds power to the rear tire via chain drive.

While the FTR Rally’s power figures suggest plenty of opportunity for wheelies and high-speed performance, Indian didn’t forget about the important accouterments you need while just collecting bugs on the open road. As a result, the FTR Rally comes with cruise control and a USB fast-charge port.

The lifted handlebars connect to a suspension that offers 5.9 inches of travel.  Photo: Courtesy of Indian Motorcycle.

The 2020 Indian FTR Rally starts at $13,499. That’s about the same as Ducati’s Scrambler 1100 Pro, which isn’t nearly as powerful. It looks as though Indian’s latest offering will not only bring more variety to the motorcycle market, but also more value.