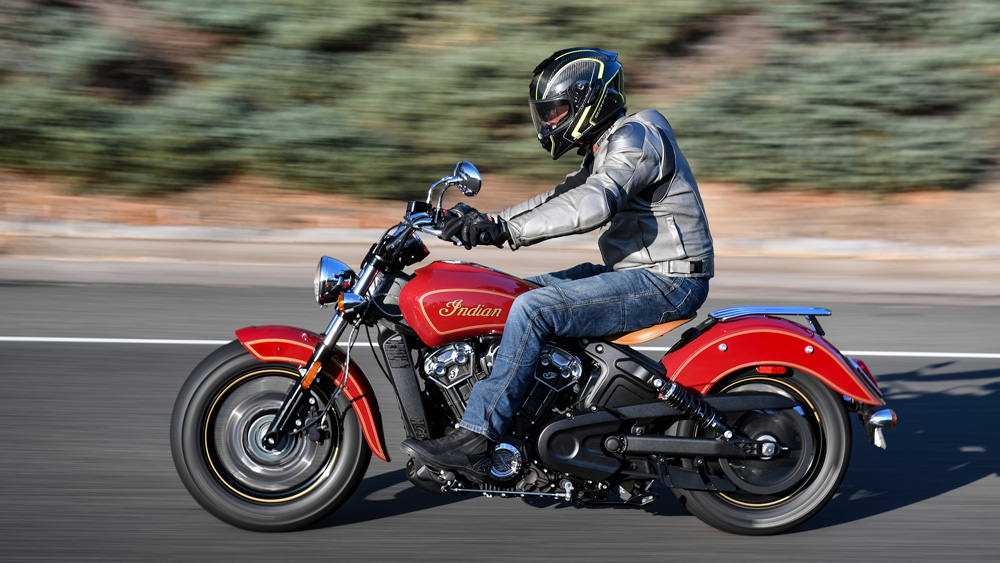 Few bike builders have as storied a past as that of Indian Motorcycle, founded in 1901. The manufacturer, based in Springfield, Mass., dominated the steep banks of the notorious, high-speed board-track motordromes that sprang up across America in the early part of the 20th Century. Indian was also a dominant force in flat track, the wholly American dirt-track racing discipline, which served as a demanding test bed for the consumer-focused motorcycles the company produced. For 2020, Indian Motorcycle celebrates the century mark of its famous 1920 Scout model with a limited 100th Anniversary edition that beautifully captures the period and glory of the original machine.

This collectable motorcycle rekindles the essence, grace and spirit of the original Scout, with deep-walled fenders and tapered fuel tank rendered in the famous Indian Red with classic gold trim. The Anniversary Scout’s paint scheme is set off by spoke wheels laced to black rims (mounted with super wide Pirelli Night Dragon tires), which hearken back to the era. Chromed backswept handlebars mimic the original, right down to the cross bar, lending both aesthetics and functionality. The stylish brown leather solo saddle is just 27.4-inches off the ground. That ride height mated to the bike’s weight of just 565 pounds makes the heritage Scout easily maneuverable for a wide range of rider body types.

The chromed crossbar and backswept handlebars are similar to those on the 1920 model.  Photo: Courtesy of Indian Motorcycle.

The Scout is about bare essentials. And with motorcycles, bare essentials translate to the power plant. The Anniversary Edition Scout’s 1133 cc liquid-cooled V-twin has stylishly milled black cylinders and heads augmented with exclusive centenary badges. Massive in diameter, split dual exhaust pipes deliver a throaty note from the 69 cubic-inch engine that, fittingly, produces 100 hp. And a well-spaced six-speed transmission delivers all that performance to the rear wheel. Disc brakes provide smooth yet powerful deceleration, and the cycle’s suspension delivers a gentle ride with a compliant feel.

The leather solo saddle is set 27.4-inches off the ground.  Photo: Courtesy of Indian Motorcycle.

Despite the Anniversary Scout receiving kudos as a collectable, the bike was built to be ridden, to be enjoyed, and it delivers on a multitude of applications; straight cruising, jaunts around town, weekend getaways and aggressive canyon running—and always exuding abundant character when parked curbside. With a low silhouette and an easily manageable feel, it makes a surprisingly sensible mount for beginning and first-time riders, while also being capable of some truly spirited outings in the hands of an experienced pilot. Riding it, one can’t help but be moved by 100 years of heritage.