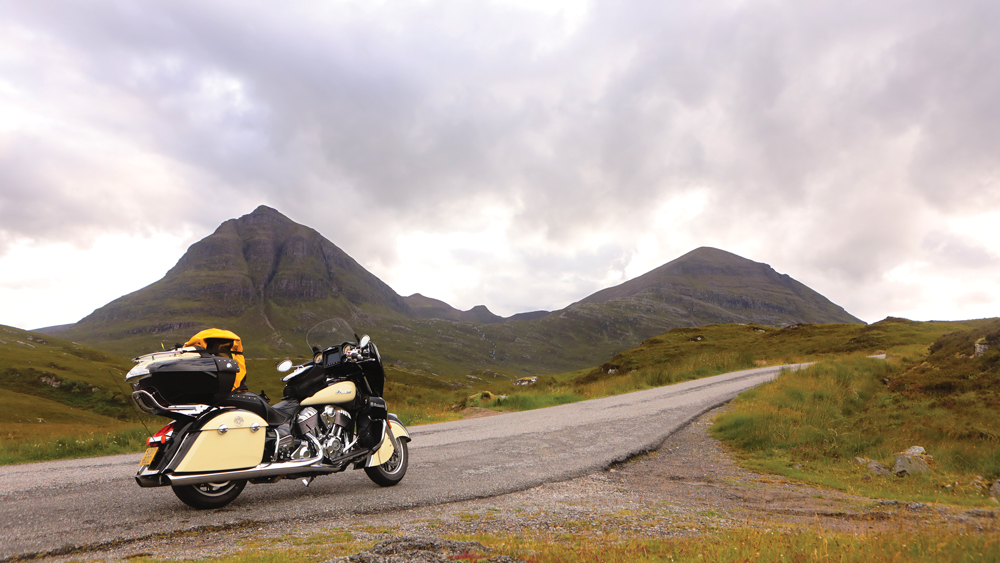 The slate-gray July sky threatens rain, yet Edinburgh’s Old Town is thronged with tourists for the forthcoming Festival Fringe. My black-and-cream Indian Roadmaster is parked outside the überartsy G&V Royal Mile Hotel, where the doorman in his tweed kilt stands bemused. Around me, passersby snap photos of the retro-glamorous bike and beg me to sit on it as I prepare to depart for the Highlands.

The Roadmaster is indeed an attention-grabber—and an oddly deluxe ride on which to tour Scotland’s North Coast 500. The 500-mile loop, which begins and ends in Inverness, carves a tortuous course around the untamed northwest extreme of Britain. Established in 2014 by Prince Charles’s nonprofit North Highland Initiative, the already iconic NC500 combines epic scenery with exhilarating switchbacks and twisties, presenting as thrilling a motorcycle journey as any in the British Isles.

I had ridden a Roadmaster in South Africa in 2015, so I knew the behemoth bagger was responsive enough to handle the NC500’s sinewy and vertiginous single-lane roads. Boosting its résumé was Indian’s new Ride Command telematics, with a 7-inch touchscreen interface, and the bike’s vintage styling—which suited my plan to visit some of Scotland’s finest historic hotels. I had arranged for a new Roadmaster through Saltire Motor­cycles in Edinburgh and was soon setting out from the city for Inverness.

I’m barely 5 minutes into my ride to Inverness when I spy a deer running parallel to my left, almost within reach. I’m amid a glade of pines, and the road is slick from last night’s rain. Suddenly, the deer skews right and bullets in front of me. As I jerk on the brake lever, the panicked animal hits the deck with hooves flailing—and I gain an immediate appreciation for the Indian’s ABS.

It’s raining again when I depart Rocpool Reserve, a Georgian manse turned hotel in Inverness. The North Sea is barely visible through a thickening shroud as I hug the coast on the A9, bound for Wick. On an adventure bike I’d be drenched, but the full-dress tourer’s vast batwing fairing and adjustable electronic windshield (with a 4-inch range activated by a switch on the bars) guarantee against being drookit. Fortunately, there are plenty of intriguing sites at which to duck the weather. South of Brora, I break at Dunrobin Castle, which, pinned by its fairy-tale towers, appears transplanted from the Loire Valley. And although I don’t tipple while riding, I add a stop at Clynelish Distillery for a Whisky 101 tour.

Climbing steeply to Berriedale, I struggle to read the tight corners hemmed by endless walls of wet Caithness flagstone. Navigating the dense veil of cold fog is made easier thanks to the brilliant tablet-like touchscreen display, which is flanked by twin analog gauges. I can select a full-screen satellite navigation map or opt for a split-screen combo that displays the map alongside customizable bike and road data that includes real-time tire pressure.

The clouds clear as I draw up to the baronial-style Ackergill Tower, a cliff-top hotel where I receive a warm couthie welcome. The blue sky and crenellated tower make a fantastic backdrop to photograph the bike, with late-afternoon sunlight glinting off its acres of chrome.

The NC500 circuit cranks up the drama beyond John o’Groats as the A836 scrolls in broad arcs through a vast expanse of heather-carpeted moor and bog clawed by wind. Lambs litter the road. West of Tongue, the road augers down past Castle Varich to the Kyle of Tongue. To my south, brooding clouds drape Ben Hope and Ben Loyal. As the road shrinks to single-​track carving around lovely Loch Eriboll, the sun finally peeks through, painting the still waters in turquoise and jade. The stretch to Durness is the stuff of coastal-ride dreams, the road rolling in swooping curves past surging peninsulas and picture-postcard beaches with Caribbean-blue seas and sand the color of Valspar Perfection.

Come Durness, the NC500 slingshots south through a wild, minimalist landscape of wind-ruffled lochans and dome-shaped mountains rising from melancholic moors cloaked in a muted palette of yellow and mauve. Oncoming cars and camper vans courteously pull over at passing places, spaced on average every 100 yards. A red fox trots across the road, but as I raise my camera, it turns bushy tail and merges into the gorse like a ghost.

Crossing the curving Kylesku Bridge, I turn right onto the denuded roller-coaster B869. Plunging and peaking like the skirl of bagpipes, this infamously testy section circling the remote Assynt peninsula is a challenge even for experienced riders. The writhing snake-thin trail with blind hills and bends requires hyper-attention and a judicious, nonstop interplay of throttle and clutch. I love it—and so does the bike, despite its near half-ton heft. The Roadmaster’s flawlessly smooth 111 cu in V-twin engine delivers stump-pulling, low-rev torque at low speed, aided by instantly precise throttle-by-wire fuel delivery. Superbly balanced, the bike powers effortlessly uphill and breezes through the curves like a buck.

After a night at the Inver Lodge Hotel, which is perched over Loch Inver, I look out on a cold morning horizon, the lake buried beneath a charcoal sky. Ensconced in a sculpted, well-heated saddle, and dry behind the fairings, I take on Scotland’s famously fickle weather once again. I’m treated to staggering views of glacier-scoured Suilven, Cúl Mór, and Stac Pollaidh—dark, brooding inselbergs gilded by golden shafts that streak down through the clouds. The tendril-thin route ripples east past Loch Assynt and turns south for Ullapool, a lovely fishing port nestled on the shores of Loch Broom. Shifting westward as the A832—a busy two-laner that feels like a freeway after the lean, sparsely trafficked back roads—the route curls around a feast of inlets and lochs before making a right onto the A896. Whittled down to a sliver, it slices sharply down through Glen Torridon, hemmed spectacularly by sheer terraced mountains.

I retire to the Torridon hotel, which sits at the head of a sea loch. The inn’s magenta tartans, wood paneling, and racks of antlers over the entrance hall recall its Victorian hunting-lodge heritage. I sink into a plump, black leather chair in the Whisky Bar and savor a dram of light, peaty 12-year-old Bunnahabhain, one of more than 350 malt whiskies filling wall-to-wall shelves. The Michelin-starred chef Ross Stovold has just moved in to helm the hotel’s 1887 Restaurant, and I experience Scotland’s gourmet field-to-fork revolution at its best over a dinner of west-coast scallops, succulent lamb rump with turnips and kale, and a wickedly divine white-chocolate semifreddo with Torridon strawberries and almonds.

Beyond Torridon, the NC500—now an unlabeled one-laner—hugs the shore of the Applecross peninsula. Sport bikes fly by—and no wonder. The 24 miles to Applecross unfurl a nonstop, grin-inducing combo of tight corners, twisties, and wide-open cliff-top straights with vast views to the Inner Hebridean isles of Rona, Raasay, and Skye. It’s a perfect warm-up for what is considered the apogee of the route: From the bay-shore hamlet of Applecross, the road claws its way to 2,035 feet over Bealach na Bà, or the Pass of the Cattle, before dropping back down to the A896 at Tornapress. Notoriously treacherous, the pass—Britain’s third-highest road—claims one of the UK’s steepest prolonged ascents, with 20 percent grades on the hairpins.

Within minutes, I’m amid swirling clouds, the summit viewpoint lost in fog. The howling wind is like a wildcat’s bite, but the ride is sublime as it corkscrews downhill in precipitous hairpins before sluicing in exponential decay through a U-shaped valley framed by monumental rock walls the color of eggplant.

From Tornapress, the route broadens and quickens through the glens on a final beeline for Inverness. As I enter the homestretch, the clouds break to the north. Crepuscular rays beam tantalizingly down over far-off Dornoch. It is Sunday, and the gas stations are closed. But the road is wide open ahead, and I’m driven to keep riding while the sun shines.