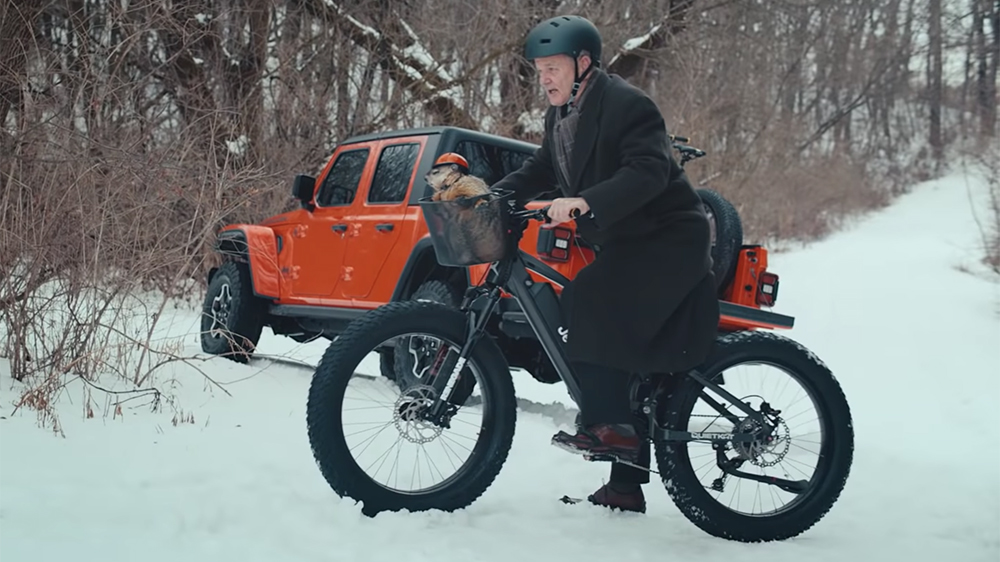 Automakers have been using Super Bowl commercials to flaunt their latest and flashiest vehicles for decades now. But Jeep did something no one was expecting with its Bill Murray-starring ad on Sunday night: it quietly unveiled its first electric bike.

That’s right, the Fiat Chrysler brand’s next vehicle isn’t another addition to its line of SUV and utility trucks. Instead, it’s a hulking battery-powered bicycle that Jeep and its partner on the project, QuietKat, claim is the “most capable off-road electric mountain bike there is.”

Named simply the e-Bike, the two-wheeler makes a split-second cameo towards the end of the company’s Super Bowl ad. The spot, a spoof of 1993’s Groundhog Day, features Murray, who reprises the role of Phil Connors, reliving the same day over and over again. Fortunately, Connors comes across the Jeep truck and e-mountain bike just in time to make the whole ordeal a little less hellish for him and the movie’s titular groundhog.

Other than the fact that the e-Bike can be fitted with a basket, the commercial is almost devoid of information about the actual bike.  But at the same time that millions of Americans were laughing along to the ad during last night’s big game, QuietKat posted a splash page with some interesting tidbits about the snow-capable mountain e-bike.

The Jeep-branded off-roader will feature a 750W electric motor stored in its down tube that is capable of traveling 40 miles on a single charge, more than enough for a day on the trails. Helping make that ride a bit more comfortable are the bike’s Fire-Link suspension and some rugged 4.8-inch tires.

While those are, apparently, the only details the two companies are ready to share right now, Eletrek reports that the bike’s motor appears to be a mid-drive Bafang Ultra, that’s capable of producing up to 217 pound-feet of torque, though that figure will likely be tuned down a bit. The website also wrote that the bike looks like it’s equipped with high-quality disc brakes from Tektro.

Another key piece of info we’re still waiting on? How much the e-Bike will cost. But given that the bike will be available starting in June, chances are we’ll find that out sooner rather than later.