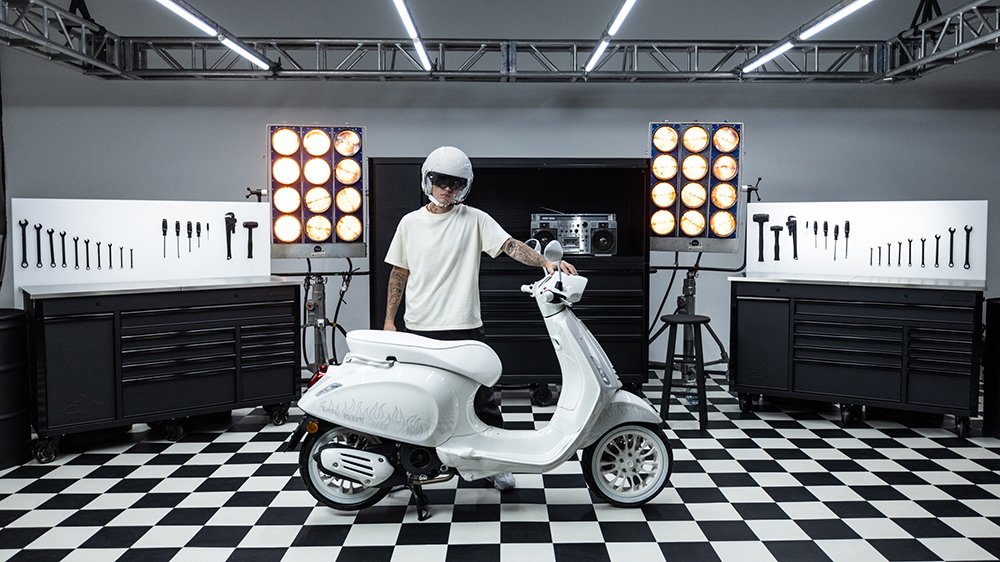 Vespas have become a trés popular ride for some of Hollywood’s biggest names. Everyone from Hugh Jackman to Andrew Garfield has been spotted zipping about town in the iconic Italian two-wheelers. In fact, megawatt pop star Justin Bieber loves the scooters so much that he just designed one of his own—and the results are, well, fire.

Dubbed simply the Justin Bieber x Vespa, the limited-edition bike was conceptualized and designed by the Canadian singer himself. The Biebs’s creation is essentially Vespa’s popular Sprint model with a striking all-white monochromatic colorway. Adding a touch of attitude, the scooter also sports white-hot flames on the chassis that harken back to old-school hot rods.

Elsewhere, the bike comes equipped with Vespa’s signature rectangular headlight and 12-inch wheels. And because this is 2022, the scooter also offers multifunctional display that syncs with smartphones, lets you play your favorite Bieber hits, or adjust the LEDs.

In terms of power, the scooter will be available with Vespa’s classic 50cc, 125cc or 150cc engines that each deliver a top speed of 40 mph, 60 mph and 70 mph, respectively.

“The first time I rode a Vespa was somewhere in Europe, probably either London or Paris,” Bieber said in a statement. “I just remember seeing a Vespa and being like ‘I want to ride one of those.'”

To ensure you ride in style, the “Love Yourself” singer also designed a few matching accessories, including a pair of gloves, a bag and an all-white helmet emblazoned with the white flames.

Of course, Bieber isn’t the first to reimagine the Italian icon. In 2020, Dior unveiled a luxurious take on the classic scooter. Streetwear designer Sean Wotherspoon also previously penned a version of the Vespa Primavera for style-savvy hypebeasts.