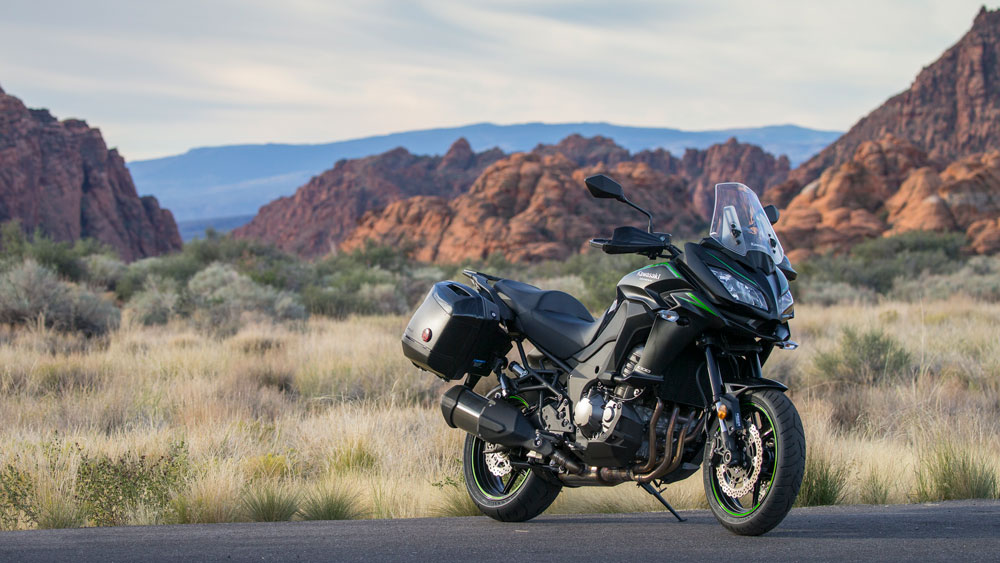 Snow Canyon State Park in Utah’s southwest corner, barely a 20-minute ride north of St. George, is a land from another age. Sand dunes 2,500 feet high have been compressed by millions of years to become burnt orange and white sandstone cliffs, their peaks swapping light between themselves as I ride Kawasaki’s Versys 1000 right up the middle.

It’s easy to squint and imagine great prehistoric beasts roaming the landscape, although it’s more difficult to envisage the searing hot lava that once coursed through the park, creating the basalt salt deposits that have turned solid and now reside by the side of the road.

Utah is almost without parallel when viewed from behind the handlebars of a motorcycle. The story of time is all around you, wrapping the land as desolate red turns to white, and white turns to lush green. It’s like riding through a watercolor painting. My Kawasaki is a more than capable machine for traversing these landscapes.

This 999 cc four-cylinder sport tourer could cross continents without losing its breath, so a day’s trip through such terrain will not stress it or me in the slightest. Rather than a test bike, the Kawasaki becomes more a vehicle from which to drink in this amazing corner of the Beehive State.

I ride northwest through the Fall colors of Pine Valley to Cedar City and stop for wood-fired pizza and the best coffee this side of the Atlantic. It’s from Michelin Star chef Michel Attali, owner of the delightful hole-in-the-wall coffee shack called The French Spot.

Finding local fare to refuel on the journey.  Photo by Kevin Wing.

From Cedar City, the colors change back to a burnt, almost crimson, red, as I ride across the tip of Zion National Park. A sport tourer needs to have some element of athleticism to it, which the Kawasaki has hidden away in its arsenal. Despite being one of the most comfortable machines in Team Green’s line up, the Versys, with its rangy riding position and long travel suspension, can slice through Zion’s switchbacks smoothly and deceptively quickly. Point it where you want and the four-cylinder bike will blast you there with consummate ease. Although top-end power is lacking compared to something like a BMW S 1000 XR, this Kawasaki cruises in a more sedate and comfortable fashion.

The versatile Versys takes me safely back to my accommodation at the Sand Hollow Resort, where the lush stunning green golf course rises from the desert like a phoenix. This single-day mission is just a taste test of the magical riding on offer in Utah, a place where you can get willfully, wonderfully lost in the landscapes that dot your vision. My return is already in the planning stages.