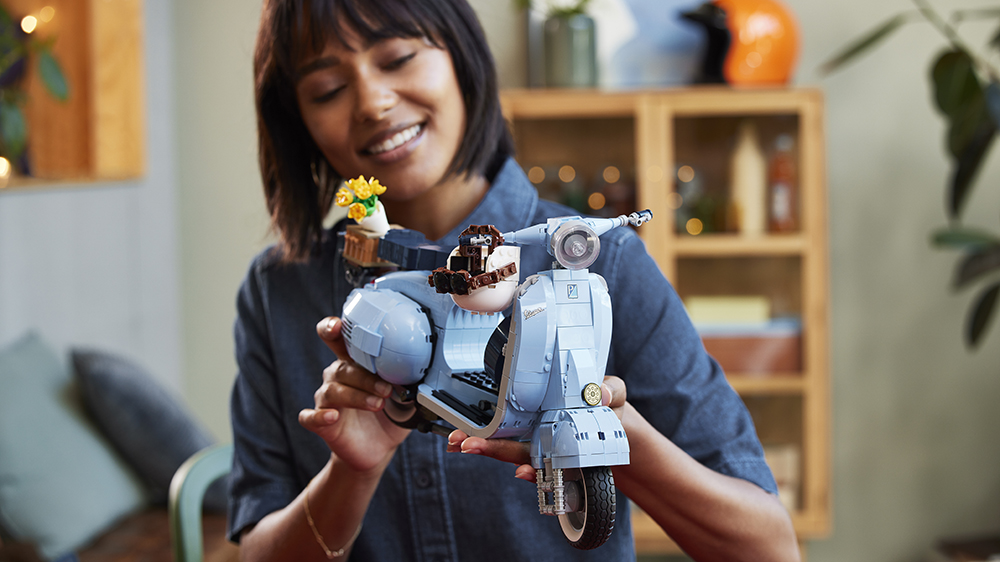 It may be hard to find an original Vespa, but thanks to Lego you can now build one that fits on your shelf.

The Danish toy company has just unveiled the latest entry in its Creator Expert line, a 1,106-piece set based on the Vespa 125. Although it’s meant to celebrate the scooter’s 75th anniversary, the model is based on the 1960s version of the two-wheeler that was a fixture of cities and towns all over Italy.

Lego has pulled out all the stops for its latest set. Its thousand-plus Legos combine to make an exceedingly detailed model that stands 8.5 inches tall and 13 inches long. The majority of its bricks are pastel blue—one of the rarest Lego colors—because it was one of the scooter’s first featured colors.

In addition to the attractive shade, Lego has included two other Vespa trademarks: two seats and a spare front wheel that’s mounted inside the leg guards right above the floor panel, just like on the full-size the original. There’s also a removable engine cover that showcases a mill built entirely from toy bricks, along with a functioning kickstand and handlebars. Vespa branding and a period-appropriate license plate make it look like it was pulled off the set of Pier Paolo Pasolini’s 1962 drama, Mamma Roma. That’s not all. As a bonus, Lego’s also thrown in a white helmet with goggles and a basket that includes a flower bouquet.

Lego’s Vespa 125 goes on sale on Tuesday, March 1, through the toy company’s website. The set, which is aimed at nostalgic adults rather than children, will cost $99.99.

If you’re looking for something a little more muscular, or just want to build up a collection of Lego two-wheelers, there’s also a 1,920-piece BMW M 1000 RR Technic and a 646-piece Ducati Paningale V4 Technic set. Happy building!