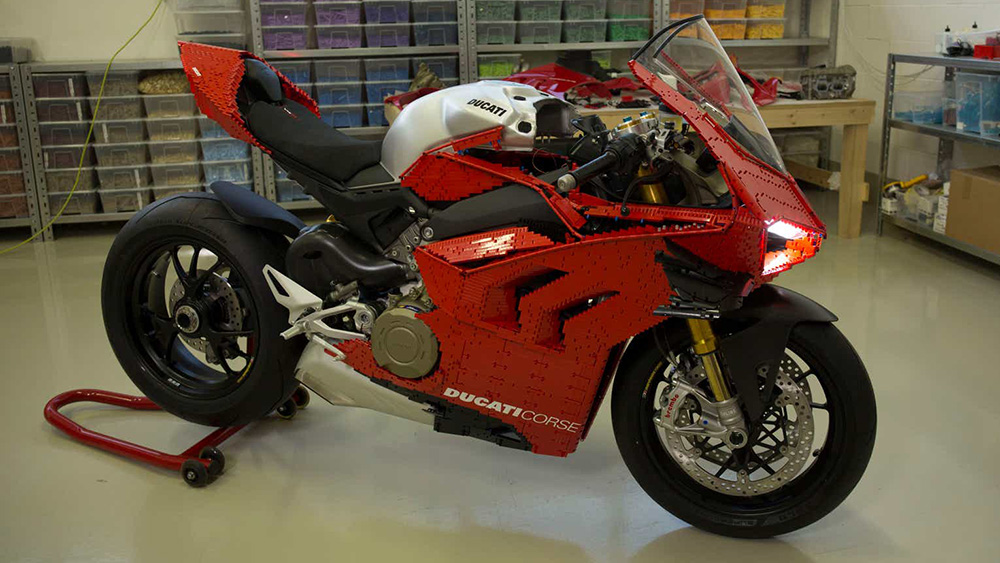 There’s always room for improvement. Just ask Lego, which has followed up its super-detailed Ducati Paningale V4 R toy set with an even more intricate recreation of that same motorcycle. But this one-of-a-kind model is life-sized and actually works.

As impressive as the iconic Danish toy company’s first Paningale V4 R may have been, it’s got nothing on its much bigger sister. The new Lego Ducati, consists of more than 15,000 bricks and features a functional 998 cc Desmosedici Stradale R engine.

The dazzling 1:1 scale model made its debut alongside the actual bike this weekend at the Circuit in Modena, Italy, this past weekend. Hand-crafted by experienced brick artist Riccardo Zangelmi, who was using Lego Technics pieces for the first time, the bike took 400 hours to build, according to a press release. It is completely glue-free, and between the tens of thousands of Lego bricks and mechanical parts, the bike tips the scale at 397 pounds. And while no one’s taken it for a spin yet, that’s only a matter of time. Its working engine is capable of producing 217 horses and 82 lb-ft of twist.

“I am very happy because I never imagined I’d have the chance to unveil a bike like this. Almost everyone at some point in their lives has played with Lego bricks at least once, but seeing up close a replica of the Panigale V4 is something incredible and at a very high level,” Ducati Team MotoGP rider Andrea Dovizioso said in a statement. “I would like to congratulate the Lego artist Riccardo Zangelmi for building such a true to life and detailed version of the motorcycle.”

While it may not seem quite as breathtaking, the smaller Lego Technic Paningale V4 R set is still plenty impressive in its own right. The striking red model consists of 646 pieces, many of which are dedicated to recreating the full-sized two-wheeler’s engine and two-speed gearbox. Though slightly simplified, both work, just like the parts on Zangelmi’s model. The Lego Technic set will soon be available to purchase through Lego’s website and will cost $59.99.