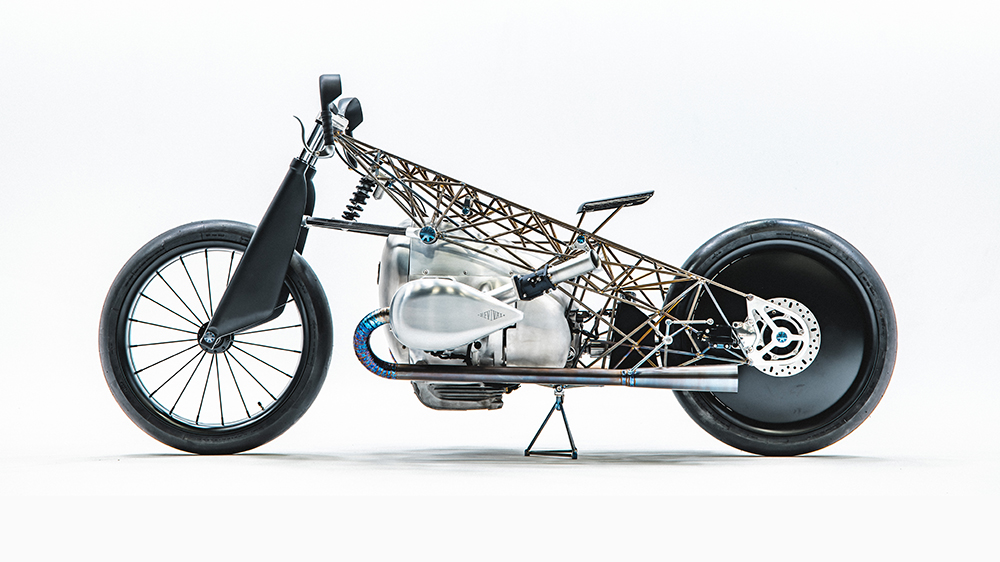 The outlaw-biker persona has shadowed respectable motorcyclists ever since Brando kick-started his Triumph in 1953’s The Wild One, portraying an unruly rider—with an uncouth machine—as nothing but trouble on two wheels. And more than 50 years after Easy Rider, the film’s Captain America, a Harley-Davidson “Panhead” with extended forks and ape-hanger handlebars, remains the quintessential bad-boy chopper. Otherwise, things in the custom-motorcycle world have changed dramatically since 1969. Today, many builders have achieved international renown for ingenuity and artisanal skills unimagined back when Woodstock was just some town in the Catskills.

Custom motorcycles are more popular than ever—and represent big business. Some bikes are the products of companies employing teams of specialists; others are the work of lone actors wrenching away in spaces the size of a small garage. Some reveal the precision of mil-spec parts and surgical fabrication; others express the handmade flair of an eccentric metalsmith. They cost what they cost. A quarter-million dollars is not out of the question, although the pain threshold for most customers is typically in the high five figures. Other bikes—labors of love—remain with their creators and have no price at all.

Since 2014, Revival Cycles, the custom motorcycle shop known for building wild, one-off machines of its own, has thrown a moto-festival in Austin, Tex., called the Handbuilt Motorcycle Show, inviting an international who’s who of peers to present their latest creations to thousands of bike-crazy attendees. “The spirit that animates all of these motorcycles—and elevates each to a work of art—is the knowledge, ingenuity and skill possessed by its maker,” says Revival Cycles founder Alan Stulberg. And every year, the show and the crowds get bigger, proving there is no shortage of fresh design ideas and a growing audience to embrace them.

Held in a former newspaper plant, the show gathers as many as 150 unique motorcycles, each perched atop a low plinth and precisely spot-lit, all arranged in a voluminous warehouse with 50-foot ceilings. Outside, more examples are presented as if in a museum sculpture garden. It’s not uncommon to see a huddle of onlookers on hands and knees, admiring the smallest detail.

Historically run the same weekend as the MotoGP Red Bull Grand Prix of the Americas, the show planned for this past April has been pushed to next, when it will again (hopefully) coincide with the races that attract thousands of spectators from around the world. Some of the exhibition’s entrants, including a majority of those highlighted here, were ostensibly completed in advance of the original show date. But just as nature abhors a vacuum, their creators will likely be using the extra time imagining what else they can do to fettle their bikes, chasing perfection down to the wire.