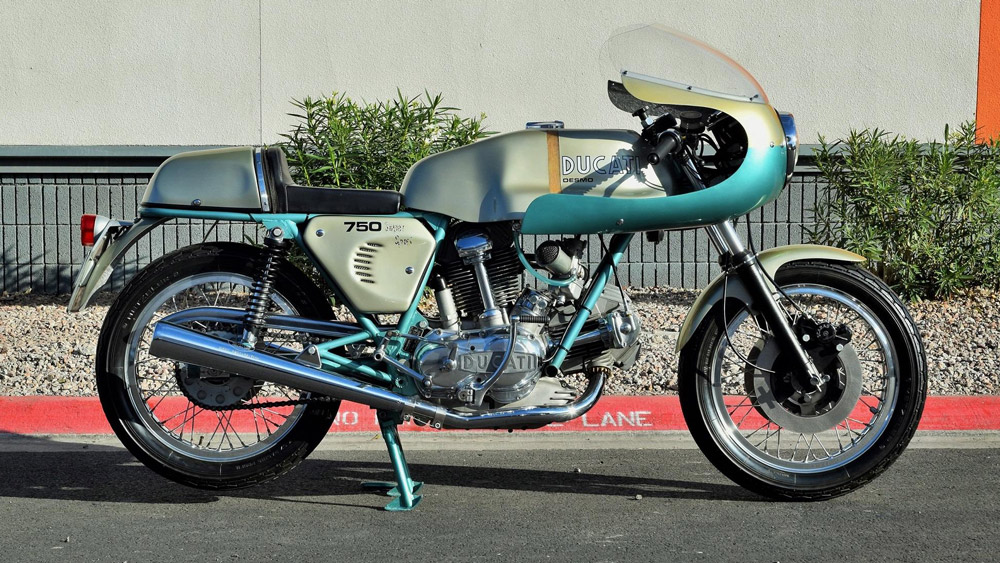 Yesterday, less than two weeks after setting a muscle-car world record in Kissimmee, Fla., Mecum Auctions rolled into Las Vegas, only this time on just two wheels. The auction house returned to Sin City to host its 29th Annual Vintage & Antique Motorcycle Auction at the South Point Hotel and Casino, where 1,750 nostalgia-inducing motorcycles will roll across the block.

“The current economic condition for collector vehicles seems to be at a very high level right now,” says John Kraman, Mecum’s lead TV commentator and a motorcycle collector himself. “We just saw that with automobiles and I suspect we’re going to see the same thing with motorcycles. This auction is going to give us an indication of where the bar is set for the vintage motorcycle market.”

While close to 2,000 bikes will be offered for sale over the course of six days, Kraman points to four significant motorcycles, set to be sold on Friday and Saturday, that are likely to excite collectors the most: an iconic Italian racing bike homologation in remarkable original condition, a pristinely restored 1930s British marvel, a revolutionary Harley-Davidson and a Japanese trendsetter from the 1970s. Three of those could approach half a million dollars in value each.

The frontrunner is a 1974 Ducati 750SS ‘Green Frame’ (pictured above). It’s an homologation bike of Ducati’s desmodromic V-twin factory racers, which continued the Italian company’s racing success first achieved by Paul Smart and Bruno Spaggiari two years prior at the inaugural Imola 200-mile race. Despite the fact that Mecum sold another 750SS ‘Green Frame’ for $247,500 during its Las Vegas auction last year, examples of this iconic Ducati rarely come to market. Of even greater significance, this particular 750SS remains in largely original condition, which only enhances its perceived value. “Original condition to motorcycle collectors is everything,” says Kraman. “Originality will drive the price and demand.”

According to Kraman, this Ducati is comparable to a classic Ferrari and “represents the ultimate status symbol” for bikes from the mid 1970s. For that reason, Mecum anticipates that it could sell for as much as $400,000.

Nipping at that Ducati’s heels—at least as far as presale estimates are concerned—comes a highly original 1940 Harley-Davidson EL Knucklehead, one that is revered among collectors since its survival (along with the survival of its associated documentation) has provided experts and historians with a more accurate picture of the composition of prewar Harley-Davidson motorcycles. “This is one of the Holy Grails of vintage Harley-Davidson motorcycles,” says Kraman. “It’s a very important motorcycle in the hierarchy of Harley-Davidson. It’s been out there before and I’m sure it’s going to bring crazy money at the auction. I have no doubt.”

Considering the role that this particular bike has played in shaping the collector and restoration hobby—not to mention the significance of the Knucklehead model for revolutionizing the look and size of Harley-Davidson motorcycles during the 1940s—this bike could sell for as much as $375,000.

Another revolutionary motorcycle that Mecum will offer is a painstakingly restored 1930 Brough Superior SS100, one that evokes the elegant aesthetic that made these high-performance British bikes the motorcycles of choice for the most discerning and affluent enthusiasts prior to World War II. “From an image standpoint and performance standpoint, as well as its build quality, the Brough Superior SS100 is one of the ultimate prewar motorcycles,” says Kraman. “The quality of this motorcycle’s restoration is peerless,” he adds, describing this particular example as “investment grade” and suggesting that it could sell for as much as $350,000. “It has been restored to an ultra-high level. It presents itself as motorcycle jewelry.”

Although not expected to rival the aforementioned in terms of monetary value, the early production 1969 Honda CB750 Sandcast that will be available is as significant a bike.

“For a lot of baby boomers who grew up with motorcycling, the Honda 750 was the bike that put high-performance motorcycling on the map,” Kraman says. “In today’s vintage motorcycle market, Japanese motorcycles, in general, are the fastest growing single segment by far; and this was the bike that got all the other Japanese motorcycle companies off their rear ends [in the early 1970s]. It put an end to the dominance of the British manufacturers of the time.” Sporting 400 miles since its restoration more than 20 years ago, this Sandcast 750 could sell for as much as $35,000.