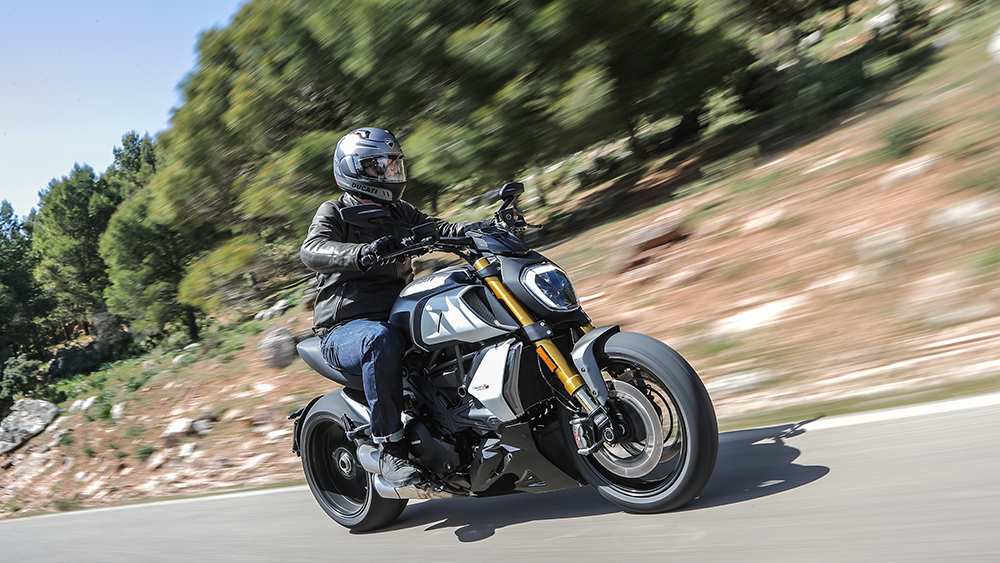 When Ducati introduced the Diavel in 2011, it had an ambitious goal of combining a naked, sport and cruiser bike into one harmonious package. “It was incredibly polarizing,” says Jason Chinnock, CEO of Ducati North America. “It was a revolutionary direction to bring these three concepts together and people either embraced it or abandoned it.” Fast forward a few years and the brand new Diavel 1260, an evolution of the originator, just won the Red Dot Design Award: Best of the Best. “We didn’t win for the motorcycle category. We won best of all the products, which tells the world that this is the benchmark of product design,” Chinnock says.

The Diavel 1260 isn’t just another handsome face; it’s a highly capable power cruiser packed with innovative tech to help keep riders screaming down the road. Its beating heart is a Testastretta DVT 1262 cc engine packed with 159 horsepower, and it’s got the soul of sport bike, as any Ducati should. “But in addition to the adrenaline-raising power, performance, and handling you’ve come to expect from a Ducati, the Diavel 1260 is comfortable enough to ride all day,” says Chinnock, who just finished doing precisely that through the mountains of Spain last week on the bike’s global launch.

The Diavel 1260 has a six-axis inertia measurement unit which takes into account your amount of lean and your speed and what you’re asking the bike to do. It all feeds through the bike’s ECU and takes control of a few things to keep you from laying it down. “There are sensors on both wheels, so if you’re giving it throttle, it’ll know if one wheel is slipping and can modulate the power until both wheels are traveling at the same speed,” Chinnock explains. Likewise, if you overcook a corner, flying in too hot, don’t panic too much about grabbing for the brake, mid-corner. “It’ll understand that you’re leaned over, that your contact patch has changed, and that you need to slow down. The ABS will kick in, and transfer braking power between the front and rear wheels, depending on which has the most grip.”

The cumulative effect of the rider aids and assists is confidence. “We’re not trying to anesthetize your riding experience; you’re very connected. It helps you develop into a better rider,” Chinnock says. Riders can select between three riding modes: urban, touring, and sport. Based on the mode, factors like ABS, traction control, throttle control, wheelie control, and more all are affected. “If you’re less experienced, you may want to try urban mode, where the there is a higher amount of rider aid intervention and a smoother delivery of power. In a city environment, you want more safety and you need less power, so it can be a big help when you’re starting out,” Chinnock says.

Chinnock claims this will be “my bike for 2019,” and while you’d expect the boss to shill for the newest wares, when you factor in that he can select anything from the lineup and he’s still choosing the 1260, his endorsement carries more weight. “I’ve spent a lot of time on prior generation Diavels,” he says. “The balance is better than it’s ever been, and I love the engine’s incredible linear delivery of torque. You can run in third gear forever on a twisty road, letting the RPMs drop low and then crank all the way back up. It’s so smooth. I rode the first 50 miles through the mountains in third gear and didn’t think about shifting once. It’s my favorite.”