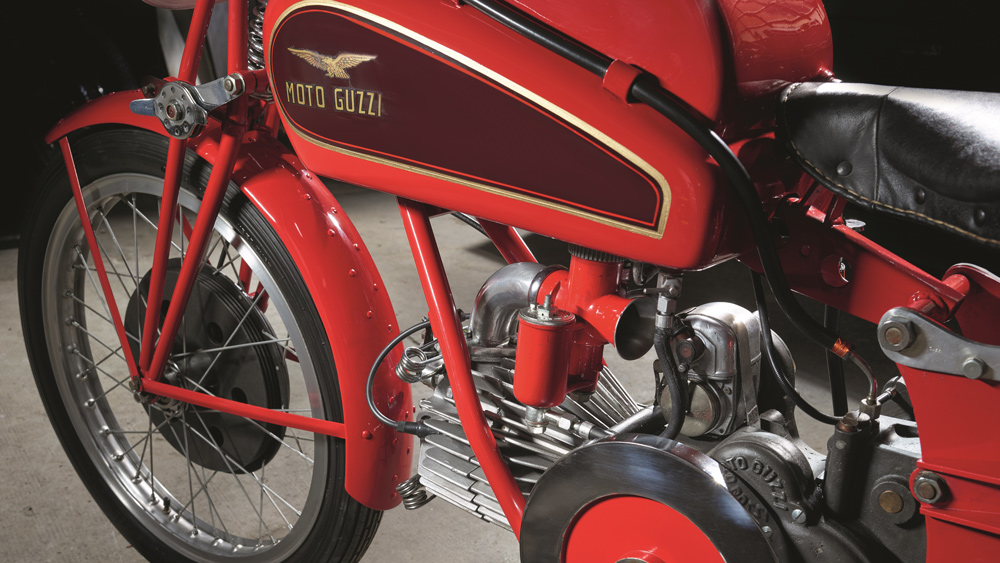 Published by Rizzoli in time to celebrate one of Italy’s most cherished motorcycle marques reaching the century milestone, Moto Guzzi: 100 Years is a fitting tribute to the manufacturer, its machines and worldwide family of devoted owners. Like the bikes themselves, books on Moto Guzzi are relatively rare, and so a 240-page tome on the subject is an especially welcome discovery. At $80, this well-designed hardcover is a must-have for any motorcycle library, and features 300 color illustrations and contemporary photography paired with a wealth of historic images.

Especially fascinating is a full visual survey of Moto Guzzi engines and models. The book, edited by Jeffery Schnapp, includes ten chapters written by owners—a mix of journalists, an actor, an architect and even an astronaut—that share a love for these singular machines.

The cover of “Moto Guzzi: 100 Years” published by Rizzoli.  Photo: Courtesy of Rizzoli.

A look at Italy’s motorcycle industry reveals dozens of names. One of the first was Laverda, founded in 1873 as a maker of farm equipment. Many others followed in the early 20th century, but among them, Moto Guzzi is one of the few true survivors. Storied brands in racing, like Benelli, Gilera, Mondial, Moto Morini and MV Agusta are alive today in badge only. Even Ducati, founded in 1926 to make radios, didn’t produce its first motorbike until 1949, and by the early 1980s was nearly out of business, saved by investors and modern designs far removed from its original bevel-drive power plants. But even today, Moto Guzzi is firing brilliantly on all two air-cooled cylinders, thanks to its unique 90-degree V-twin that remains one of the most enduring motors ever made.

Società Anonima Moto Guzzi was established on March 15, 1921 by Carlo Guzzi, Giorgio Parodi and Giovanni Ravelli, motorcyclists and WWI aviators whose shared vision was to create a new motorcycle for an Italy recovering from the tribulations of the Great War. Their factory was in Mandello del Lario on Lake Como, about the most idyllic place one can imagine building—and riding—motorcycles.

Remarkably, Moto Guzzi, a part of the Piaggio Group since 2004, manufactures its various models there to this day. And there is hardly an engine layout left unexplored by the maker; single-, twin- and four-cylinder examples were developed for road and race machines over the years. The most famous oddity in Moto Guzzi history is the diminutive 500 GP V-8 built from 1955 to 1957.

Brothers and Moto Guzzi enthusiasts Vittoriano and Gianfranco Guareschi (left and right, respectively) at their dealership and workshop in Parma, Italy.  Photo by Mario Morandi, courtesy of Rizzoli.

The engine that made Moto Guzzi famous, however, was unveiled in 1965 and is still the basis of its current line. The 90-degree, longitudinal V-twin originally displaced 700 cc, with some recent models powered by versions twice as large. What connects all current and historic Moto Guzzi bikes is not just their fundamental design—pure, elemental and unmistakably Italian—but an international community of owners whose commitment is unconditional.