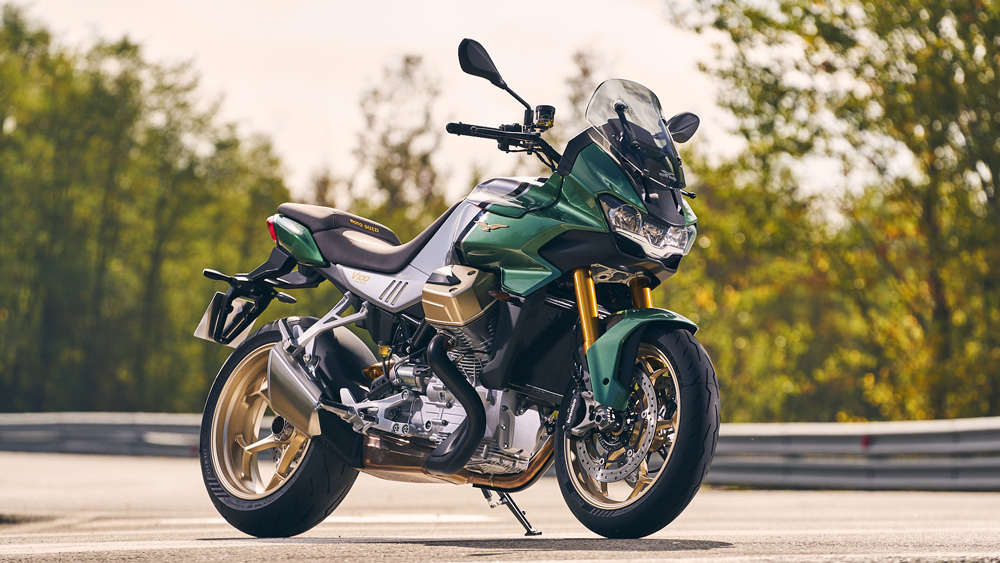 Celebrating 100 years of operation in 2021, Moto Guzzi decided to not just give themselves a new factory in the province of Mandello del Lario in northern Italy, but to introduce the first production motorcycle to feature adaptive aerodynamics.

The new Moto Guzzi V100 Mandello features slight shape-shifting capabilities owed to wind deflectors mounted on the sides of the gas tank. These adjust their position depending on the speed and riding mode selected. The design ensures air pressure on the rider is reduced by a claimed 22 percent, numbers normally reserved for much larger touring motorcycles with wider fairings, while allowing the bike to retain its sportier characteristics.

Given this fact, it’s almost easy to overlook that the V100 is the first all-new Moto Guzzi for a very long time. The model features a 1,042 cc “compact block” V-twin—transversely mounted—with its cylinder heads rotated 90 degrees for better rider comfort; a power plant that’s touted to have 115 hp and 77 ft lbs of torque. It should be noted that 90 percent of that torque is coming at a mere 3,500 rpm. The motor is 4 inches shorter than the one found in the V85 TT small block, and is mated to Moto Guzzi’s trademark shaft drive and a left-side-mounted single-sided swingarm. And striking gold wheels roll the show onwards.

A close-up look at one of the bike’s active-aero winglets.  Photo by Marco Campelli, courtesy of Moto Guzzi.

The V100 Mandello is important not just for the aerodynamics and the motor, but also for the fact that this is the first Moto Guzzi to come with a six-axis Inertial Measurement Unit, cornering ABS and cornering lights, and four different riding modes—Travel, Sport, Rain and Road. It’s also the first Guzzi to employ the Öhlins Smart EC 2.0 semi-active suspension.

Along with the electronic suspension, the V100 will utilize the new Moto Guzzi MIA multimedia platform that, via the 5-inch TFT dash, allows Bluetooth connectivity from your smartphone, where you can also set GPS coordinates and then mirror them on the dash.

Draped in green, silver and gold, the V100 Mandello is certainly a looker, and given Moto Guzzi’s penchant for holding onto its renowned heritage, we’re pleased to see the house of Mandello del Lario push forward with a thoroughly modern design and join compatriot Ducati, with its Multistrada V2, in the sporty sport touring market.

Moto Guzzi USA has yet to unveil the price and availability on the V100 Mandello, but we’re told to expect more information by the middle of December.