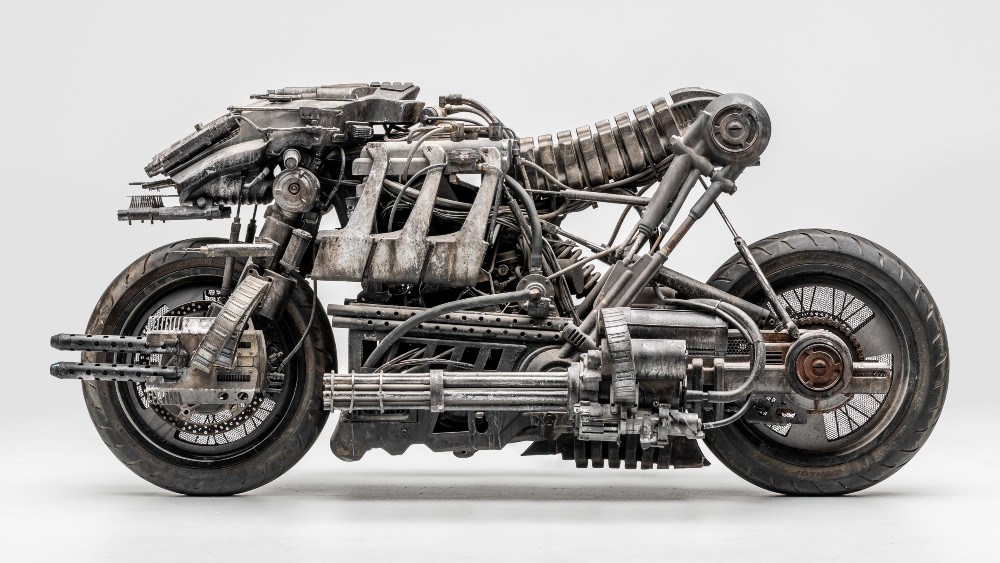 Sometimes, even science fiction needs an injection of IRL ingenuity.

The 2009 movie Terminator: Salvation was veritable special effects extravaganza. As part of the computers vs. humans saga, a killer robot motorcycle seeks to destroy humanity’s only hope (because, of course). But it turns out this bike itself was no computer creation. Rather, it was a real, fully functioning Ducati built by real humans—and it’s now on view at LA’s Petersen Museum.

The so-called Moto-Terminators featured prominently in the McG-directed fourth Terminator flick, as Design Boom recently reported.  Rather than rely on CGI to create the apocalyptic death machines, designers Martin Laing and Victor Martinez built the H.R. Giger-esque monstrosity over the frame of a 2009 Ducati Monster 1100 S.

While the futuristic vehicle—the movie is set during the then-far-flung year of 2017—features an ’80s heavy metal aesthetic and an intimidating litany of add-on weapons, it still includes the original bike’s tires and powerful 1078cc 90 bhp L-twin engine. Acting as Skynet’s autonomous “attack dog” in the film, the Moto-Terminator was ridden by a real flesh-and-blood stunt man during filming. But the bike’s decorative flourishes, including sawed-off handlebars, made it difficult for even an expert to handle.

The bike features prominently in a three-minute highway pursuit scene in the movie, in which a truck of resistant fighters—carrying John Connor (Christian Bale) and his yet-to be father (Anton Yelchin)—desperately tries to shake off two deadly Moto-Terminators.

Terminator: Salvation was initially intended to kick off a second trilogy of Terminator films, a plan that was later scrapped in favor of a reboot. The film, along with T3: Rise of the Machines and Terminator Genisys, has now been written out of series continuity, with the next film in the franchise, Terminator: Dark Days, acting as a proper sequel to the first two Arnold Schwarzenegger-starring hits. A trailer for the forthcoming film was released earlier this week.

As for the Moto-Terminator Ducati, you can see the actual bike used the film as part of the Petersen’s “Hollywood Dream Machines” exhibition, which will be on view through March 2020. For pop-culture buffs, other vehicles in the show include the DeLorean from Back to the Future and K.I.T.T. from Knight Rider.

Check out the Ducati in action in this clip from Salvation: