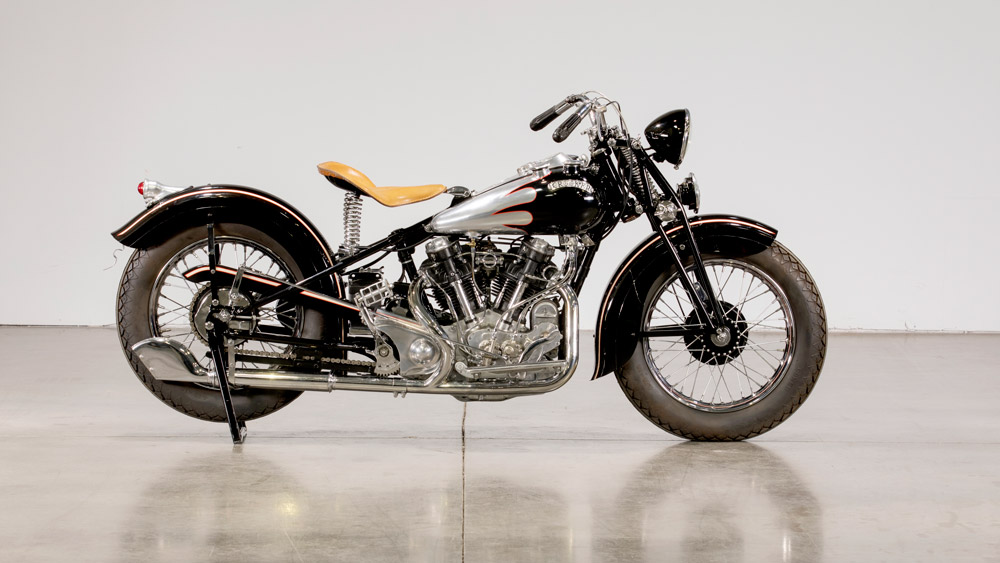 In 1957, Christer R. Christensson bought his first motorcycle, a Husqvarna Silver Arrow. Thinking back on that acquisition, the now-77-year-old Swedish collector says a switch inside of him was immediately flipped. “I was just drawn to the design and beauty of the bike,” he says.

Since then, Christensson has spent more than half a century working with his colleague Ove Johansson to create the MC Collection, a significant assemblage of noteworthy motorcycles, which over the past two decades was partially displayed in a showroom just outside of Stockholm. As the experienced collector explains, the public museum was designed to celebrate and showcase the bikes as more than just machines. “When motorcycle designers, engineers, and craftspeople combine their talents, a motorcycle can become a masterpiece of applied art,” Christensson says. “It can become a mechanical sculpture.”

Reflecting on his efforts to create a collection that encompasses more than 400 motorcycles, Christensson acknowledges that his success can be attributed, in part, to ideal timing. “I took the chance to buy and restore motorcycles at a time when we had craftsmen with the knowledge and image memory of the old bikes from 1900 to 1950,” he explains. “Most of these people who helped us are retired or dead. There was a window of opportunity which will not come again.”

A close-up of the 1925 Brough Superior SS100 on offer.  Photo: Courtesy of Mecum Auctions.

Fortunately, the time has come where contemporary motorcycle collectors and enthusiasts can acquire some of the revered bikes within Christensson’s and Johansson’s collection. Having recently accepted an invitation to move his motorcycle museum to Tido Castle—a preserved Baroque palace about 75 miles west of Stockholm—Christensson understands that it is time to pare down his collection, especially since the showroom within the castle can only accommodate 120 motorcycles. “Being pragmatic and realistic about my age, I wanted to offer my bikes to serious collectors or museums,” Christensson says, “rather than store them in my warehouse. I hope other collectors will enjoy them.”

The MC Collection will still include a broad spectrum of motorcycles, from a 1904 Marsh to a 2018 Ducati Panigale R; however, Mecum Auction’s upcoming Las Vegas motorcycle sale, Jan 22 to 27, will feature a docket that is enhanced by more than 230 bikes from Christensson’s and Johansson’s collection, all offered with no reserve. The following five examples represent the most unique, desirable—and perhaps most valuable—motorcycles that are guaranteed to exchange hands as a part of that auction in Las Vegas.

Motorcycle races of the early 20th century, specifically those on board-track circuits in the United States or courses with banked concrete corners in England, quickly popularized the two-wheeled vehicles. During this era, the Indian Motorcycle Company flourished, and models like this 1913 Indian 8-Valve Board Track Racer, which remains in its original condition, dominated the competition.

Bidding on this 1913 Indian could motor to as much as six figures.  Photo: Courtesy of Mecum Auctions.

As explained by Paul d’Orléans, a motorcycle expert who serves as a commentator for Mecum Auctions’ television broadcasts, Indian’s eight-valve racer was far ahead of its time. “The science of gas flow in engines was in its infancy in 1911, but engineers calculated that multiple small valves would create less strain on the entire valve train by making all the components smaller and lighter,” he says. “The concept is used in every internal-combustion engine today, but Indian was the first to build a four-valve cylinder head for a motorcycle.” This bike, an early example of that revolutionary mechanical engineering, could sell for as much as $100,000.

During the years when it was built, from the mid-1920s until 1940, the Brough Superior SS100 reigned supreme as the fastest and most expensive production motorcycle in the world. Many also considered it to be the most beautiful bike on the road. As someone who rode an SS100 during the Motorcycle Cannonball endurance rally last year, d’Orléans can attest to the model’s legitimacy as a comfortable cruiser even today. “George Brough demanded his suppliers use the best materials available inside the engine and gearbox, and he was the only manufacturer to make such demands,” d’Orléans says. “As a result, Broughs hold up to regular use in a way most other 1920s bikes cannot.

For a 93-year old motorcycle, the SS100 is a surprisingly modern-feeling machine while in motion. The power delivery is incredibly smooth, and the machine sounds amazing going down the road: a soft baritone burble, like a musical heartbeat.” This 1925 Brough Superior SS100 from the MC Collection is expected to fetch as much as $450,000.

Described by Christensson as “the first real superbikes,” Al Crocker’s motorcycles, of which there are fewer than 75, are the Holy Grail for most motorcycle collectors, certainly for those who focus on early American machines. Each Crocker bike was a bespoke creation and they all outperformed the competition, regularly exceeding 110 mph, thanks to engines that produced as much as 40 percent more power than the next best bikes on the market.

This 1939 Crocker Big Tank, an authentic American engineering marvel (it’s listed on the Crocker Registry), could sell for as much as $500,000. It will assuredly offer the winning bidder a chance to boast that he or she owns one of the most authoritative motorcycles ever built. “Al Crocker’s masterpiece has influenced motorcycle design to this day,” says d’Orléans. “The teardrop gas tank, the high handlebars, the abbreviated fenders, the scale of the wheels, the wheelbase, and the scalloped two-tone paint job are all icons of a purely American custom style.”

Although the winning bidder of this 1971 Honda CR750 Racer won’t be able to take the bike out on public roads—it’s a dedicated track racer—they will become only the bike’s third owner, as the factory-built racer was owned and raced by a certified Swedish Honda racing team prior to Christensson’s acquisition of it in 1975.

Only a handful of factory CR750 racers exist.  Photo: Courtesy of Mecum Auctions.

Referencing the 1970 Daytona 200, the motorcycle contest that established Honda’s racing dominance (it was the first competition that pitted the Japanese brand against American counterparts), d’Orléans describes this bike as “the most desirable version of the Japanese bike that changed history.” Estimated to sell for as much as $250,000, the example owes its projected value largely to the model’s scarcity. “Real, documented, factory CR750 racers can be counted on one hand,” says d’Orléans.

One of only a dozen replicas of the bike ever built.  Photo: Courtesy of Mecum Auctions.

Only a dozen replicas of those infamous machines were ever built, and this example is expected to sell for as much as $65,000. Yet, as d’Orléans acknowledges, these recreations are unlike many others in the collector motorcycle universe. “Replicas are common and acceptable,” he says, referencing “continuation” Norton Manx and Matchless G50 racers that were built almost immediately after the affiliated factories abandoned racing in the early 1960s. “These Husqvarnas are different, as the factory still exists, still makes motorcycles, and cooperated fully in the replication of these lost motorcycles. They are an homage to an amazing period of Husqvarna’s history and were built because the world wanted to see these gorgeous machines once again.”