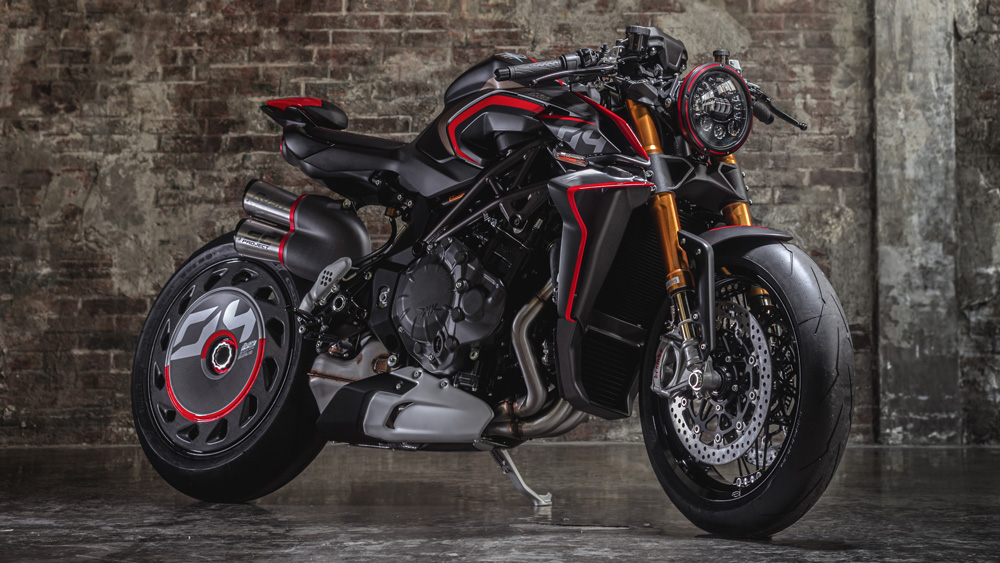 Drag strip meets The Dark Knight is probably an apt way of describing the MV Agusta Rush 1000, which is due for its first round of production at the MV Agusta manufacturing plant in Varese, Italy, next month.

Limited to only 300 units worldwide, the Rush 1000—with a steel trellis and aluminum chassis—uses the Brutale 1000 as its base. Power from the 998 cc inline four-cylinder motor is quoted at an arm-wrenching 208 hp in stock form and 212 hp when you add the Rush Racing Kit. That kit includes a new titanium exhaust silencer, remapped ECU and a few carbon-fiber goodies like passenger-seat cover and exhaust guard.

The new model presents class-leading features like the Öhlins Smart EC suspension (similar to what’s on the Ducati Streetfighter V4 S), eight-level traction control, wheelie control, up-and-down quickshifter, plus an aerodynamic cover on the rear wheel to aid in high-speed stability. And considering it’s a naked bike with zero wind protection and a top speed of more than 185 mph, you’ll want all the stability you can get.

MV Agusta has changed tack in the last year, deciding to focus on a range of special, limited-edition models to serve the highest end of the sport bike market, much in the same fashion as hypercar manufacturer Koenigsegg within the automotive industry.

Under the leadership of chairman of the board and CEO, Timur Sardarov (son of billionaire oil and gas oligarch Rashid Sardarov), MV Agusta has secured funding with the aim of increasing sales to more than 25,000 motorcycles over the next five years, as well as providing much needed investment in its global distribution and dealer network in Europe, Asia and the USA.

In a stagnant year for not just MV Agusta but the entire industry, the Rush 1000’s production comes as the world gets ready to roll once again. Now it’s just a matter of how the Rush rides. But rest assured, as soon as we find out, we’ll let you know.