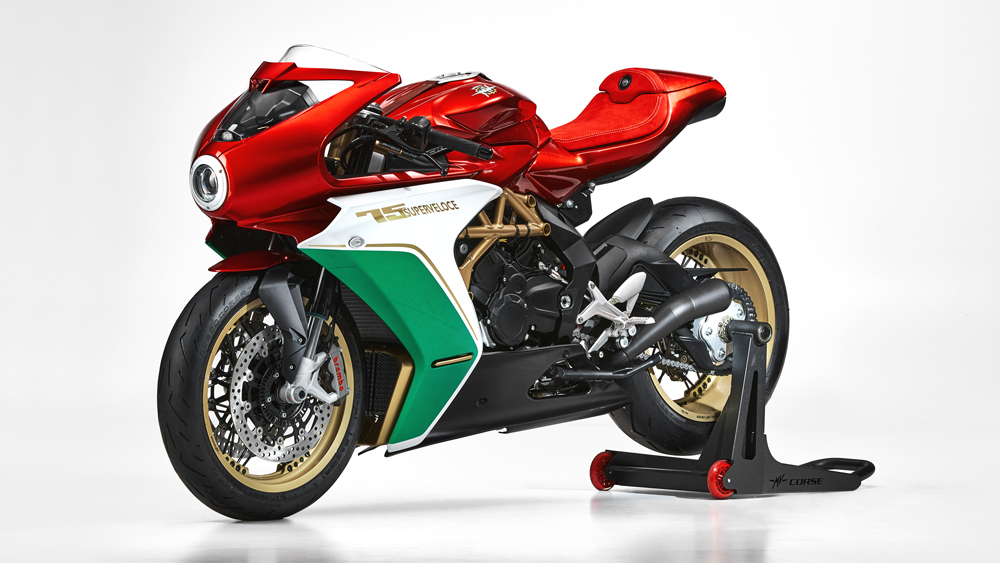 MV Agusta turned 75 years old in 2020 and has created a rather special motorcycle to commemorate the occasion. The MV Agusta Superveloce 75 Anniversario will be limited to only 75 examples and is on sale for just 75 hours via the company’s revamped website. Oh, and that ticking clock started Saturday evening in the US. The limited number and timeframe of availability make it one of the most exclusive machines that MV Agusta has ever produced. But get this; all it takes to secure a priority production slot is a deposit of approximately $118.

Priced at $25,498, the Superveloce 75 Anniversario is based off the base Superveloce 800, itself derived from the F3 800 super-sport model. Fit with a 147 hp, 798 cc inline three-cylinder power plant that allows for a top speed of 150 mph, the Superveloce skates the design line between retro cool and modern tech better than almost any production bike on the market right now, and the 75 Anniversario edition ratchets that style up even further.

“We chose the Superveloce as an iconic base to develop our celebrative model for it perfectly embodies the balance between modern forms and MV Agusta’s racing legacy,” said Timur Sardarov, CEO of MV Agusta Motor, in the official announcement. “I am glad the launch of the 75 Anniversario coincides with that of our new official website, which was designed to offer MV Agusta fans around the world a complete, immersive experience into our world.”

The Superveloce 75 Anniversario differs from the base model by way of a track-specific three-outlet Arrow muffler (with its own dedicated ECU setting), a gorgeous Italian tri-color paint scheme, red Alcantara seats (for both rider and passenger) with gold stitching and a numbered production plate on the steering head.

We may not be getting an example anytime soon to try out, but MV Agusta USA has just informed us that we’ll be one of the first to test a base-model Superveloce at the end of the month.

As the company reestablishes itself in North America, it looks like the ultra-exclusive Superveloce 75 Anniversario is just the start of a brilliant road ahead.