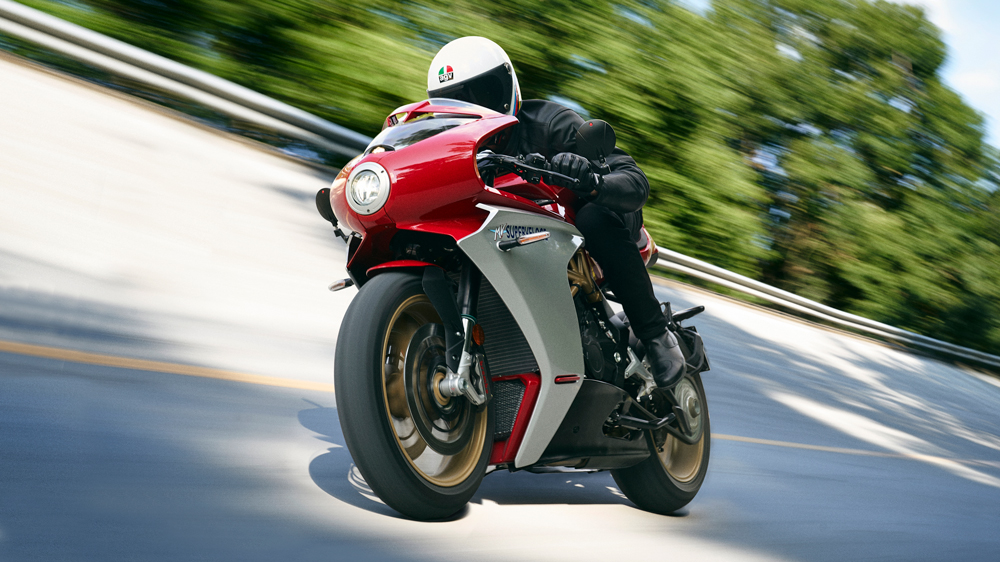 MV Agusta has brought yet another stunning motorcycle to market, the Superveloce 800. If the name “Superveloce” sounds familiar, it should. This is the second such machine to bear the moniker after the Superveloce Serie Oro was named the most beautiful motorcycle of the EICMA—the industry’s premier trade show—in 2018.

The new Superveloce 800 gains its glorious aesthetic from MV Agusta’s storied racing past, with design cues taken from the machines that powered Giacomo Agostini to 13 of his 15 world grand prix championships. The model is available in the classic racing colors of red and silver or black, with both options featuring a gold color scheme for the steel frame and wheels. There’s also a lovely leather strap down the center of the tank.

Giacomo Agostini, pilots his MV Agusta 500 at the Phillip Island circuit in Australia in 2015.  Photo: Courtesy of PJ Archives.

Accents aside, the Superveloce uses the same 798 cc, inline three-cylinder motor found in the F3 800, although without the SCS (Smart Clutch System) that we featured earlier this week on the Brutale range. The Marzocchi forks and Sachs shock are devoid of electronics but fully adjustable, and Brembo provides the braking with its four-piston monobloc front brake calipers biting 320 mm brake discs. MV Agusta has also fitted the Bosch 9 Plus ABS system with Race Mode for disengaging the rear ABS but still utilizing the system up front.

Available in either red and silver or black, the bike features a gold color scheme for the frame and wheels.  Photo: Courtesy of MV Agusta Motor S.p.A.

The MV Agusta Ride App is accessible on the Superveloce, allowing you to pair your phone to the five-inch TFT display, taken from the Brutale 1000 Serie Oro. This gives you the opportunity to change the variable engine maps, ABS level, traction control settings and quick shifter sensitivity. It also enables you to catalog a ride and use navigation by mirroring your phone to the dash.

The Superveloce 800 is equipped with the Bosch 9 Plus ABS system with Race Mode.  Photo: Courtesy of MV Agusta Motor S.p.A.

The original Serie Oro’s design, which won over so many, runs through this bike. The model includes an old-school-styled (but entirely modern) LED headlight along with the Daytime Running Light and the circular LED brake light.

The MV Agusta Ride App allows you to pair your phone to the five-inch TFT display.  Photo: Courtesy of MV Agusta Motor S.p.A.

With the almost garish appearance of some of the recent unveils from MV Agusta, we’re huge fans of this retro direction. Considering it’s based on the F3 800, the Superveloce 800 has the looks and the goods to be a standout machine in the manufacturer’s lineup.