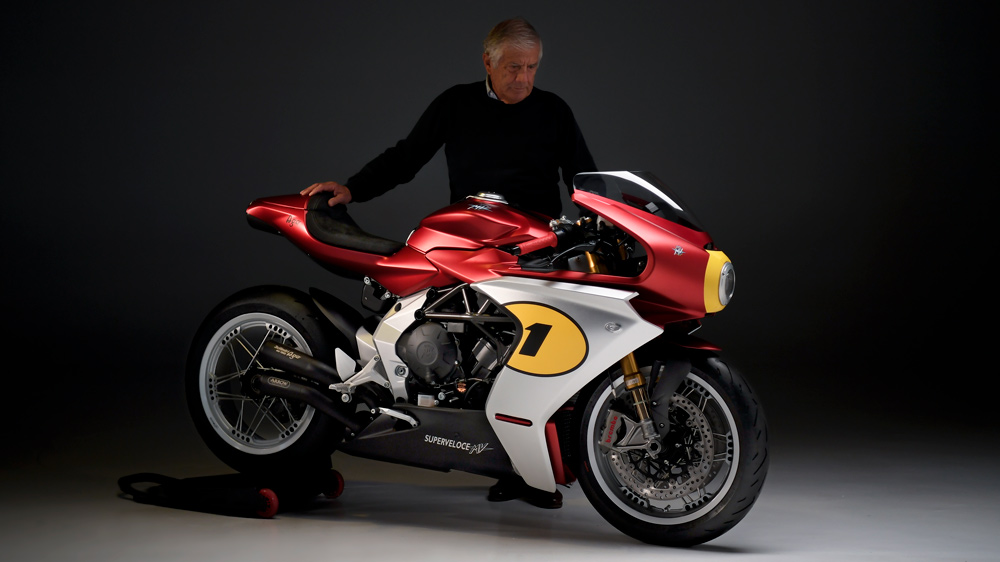 Giacomo Agostini, the most successful rider in the history of grand prix racing, is a national treasure in his homeland of Italy. He’s also inexorably linked to MV Agusta, having taken all but one of his 15 world championships with the manufacturer. MV Agusta holds the man, affectionately known globally as “Ago,” in such high esteem that it has produced a series of production machines bearing his name, such as the F3 Ago and F4 Ago. Yet perhaps the greatest honor MV has bestowed thus far is the newly announced Superveloce Ago.

MV Agusta’s standard Superveloce model is already a bit of a tribute to Agostini and his three-cylinder grand prix dominators of the 1960s, but the Ago version takes things a few steps further. The $35,175 machine uses the same 147 hp, 798 cc inline three-cylinder motor as the Superveloce but gets a smattering of engine upgrades. These include revisions to the valve guides as well as the crankshaft and piston main bearings.

However, the big additions come in the form of the new, mechanically adjusted Öhlins NIX30 fork and TTX shock—similar to what is found on the previous generation Aprilia Tuono V4 Factory—and the striking 3.5-inch front and 5.5-inch rear spoked wheels that look lifted straight from a 1970’s grand prix machine. There’s also lashings of carbon fiber, with the front mud guard support, rear mudguard, swingarm protector, underseat cover, chain guard and tail cover all crafted from the composite. In addition, Alcantara is used for the seat cover material.

The bike’s race-inspired aesthetic features an eye-catching red-and-silver paint scheme adorned with Agostini’s famous No. 1—the numeral reserved for champions until it became uncool to wear the digit on one’s number board (thanks, Valentino Rossi). As you’d expect, MV Agusta has developed a race kit in parallel with the Superveloce Ago, which, just like the one on the MV Agusta Brutale 1000 Nürburgring, comes with the bike at no extra cost. In it, you’ll get a new Arrow exhaust and associated ECU upgrade that boosts output to a claimed 151 hp, a CNC-machined fuel cap with your bike’s limited-edition number, a black leather tank strap, a passenger-seat cover in Alcantara, red hand grips (an Agostini favorite from his racing years) and a limited-edition certificate of origin.

The MV Agusta Superveloce Ago is a stunning model from a company that already specializes in beautiful machines. If you want one, though, you’d better be quick. There will only be 311 examples, one for each of Agostini’s grand prix race victories.