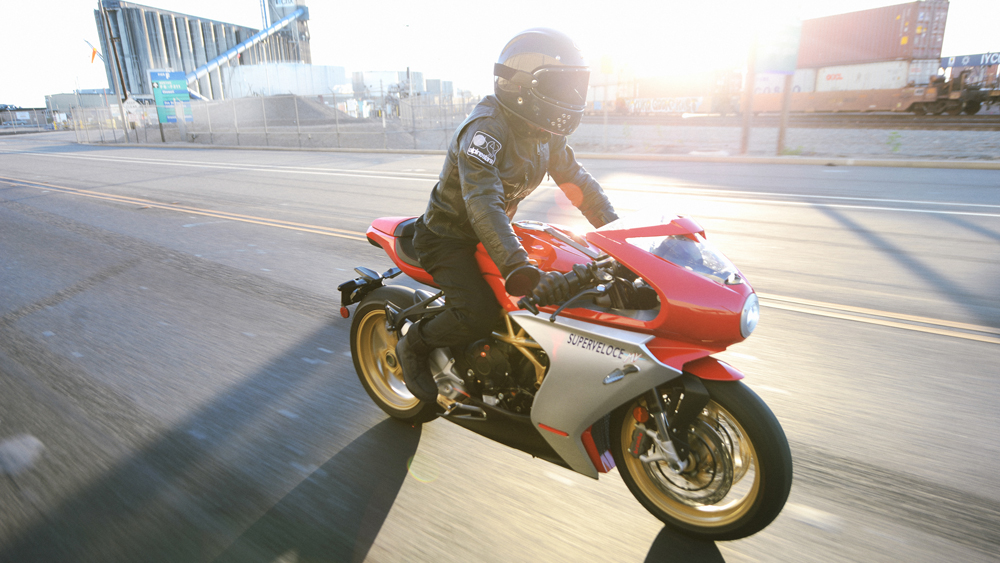 It feels as though we’ve been waiting to test the MV Agusta Superveloce for nearly a decade. In truth, it’s only been a touch over two years from when we first laid eyes on the Superveloce Serie Oro at the EICMA Show in Milan, the bike that provides the template for the new base Superveloce that we were recently able to ride.

That beautiful Superveloce Serie Oro served as an introduction to a new line of nostalgically styled yet thoroughly modern MV Agusta bikes, which have also inspired limited-edition variants in the 75 Anniversario and a collaboration with French sports-car manufacturer Alpine.

Tipping the scales at 458 pounds with a 4.36-gallon tank of gas, the $20,998 base-model Superveloce is effectively a dressed-up MV Agusta F3 800 supersport motorcycle. It uses the same 148 hp, 798 cc three-cylinder motor—generating 65 ft lbs of torque—along with an identical tubular steel chassis and Marzocchi-suspension configuration as its track-derived brother.

What’s different, however, is the bodywork. The visual presentation takes more than a few styling cues from the great MV Agustas of yesteryear, like those ridden by Giacomo Agostini in Grand Prix racing during the 1960s. In direct defiance to the current trend of gaudy winglets and oversized bodywork, the Superveloce is slim and low, with the round headlight tightly enveloped in an upper fairing that has a design that sits perfectly between what we loved in the ‘60s and what we’ve since learned about modern aerodynamic efficiency.

The lines flow like water over the gas tank (which is accented by an old-school leather strap) through to the very small rider seat to an even smaller tail section that houses a singular round taillight. It’s a clean aesthetic with very little fat to trim.

Available in Metallic Carbon Black/Dark Metallic Grey or the classic Ago Red/Ago Silver of our test bike, both variations come standard with gold wheels. The black edition gets a gold frame, however, while the Ago Red edition’s frame is also red.

When dressed in in Metallic Carbon Black and Dark Metallic Grey, the Superveloce gets a gold-colored frame.  Photo by Jose Gallina, courtesy of MV Agusta Motor S.p.A.

MV Agusta has delivered a reworked MVICS (Motor and Vehicle Integrated Control System) that pairs with an Eldor EM 2.0 ECU (Engine Control Unit) to deliver a suite of rider aids on par with what competitor Ducati offers. There’s eight-level traction control; an up-and-down quick shifter; three-stage throttle response in Sport, Race, and Rain (four if you include the Custom map you can build); cruise control; ABS and the new five-inch TFT dash that features the MVride app for navigation mirroring.

For all practical purposes, the Superveloce is still a supersport machine, which is both good and bad. Below 3,000 rpm, there’s very little bottom-end torque, but once you’ve cleared the MV’s throat, acceleration is stupendous, accompanied by one of the best exhaust sounds in motorcycling.

This is a motorcycle that will roar to speed quicker than expected. And the hard suspension and race-inspired riding position feel better the faster you go. Conversely, the ride at slower speeds is on the stiff side—just on the happy side of uncomfortable—and you’ll get more than your fair share of whacks from the thin seat when traveling over potholes if you’re not careful.

But point the Superveloce at your favorite set of twisty corners, and you’ll see that this motorcycle is more than just a fashion statement. The forward weight bias allows you to load the front Pirelli for maximum turn speed. And, combined with a wide, flowing-corner riding style—much the same as Agostini’s back in the day—you will experience a bike that handles bends with aplomb. In this instance, function follows form.

The MV Agusta Superveloce stands out from the pack as a modern classic. Aesthetically, it’s drop-dead gorgeous (at least in our eyes), but you can only look at bike so long. It needs to live up to the hype, and, thankfully, the Superveloce does. Another example of how good things come to those who wait.