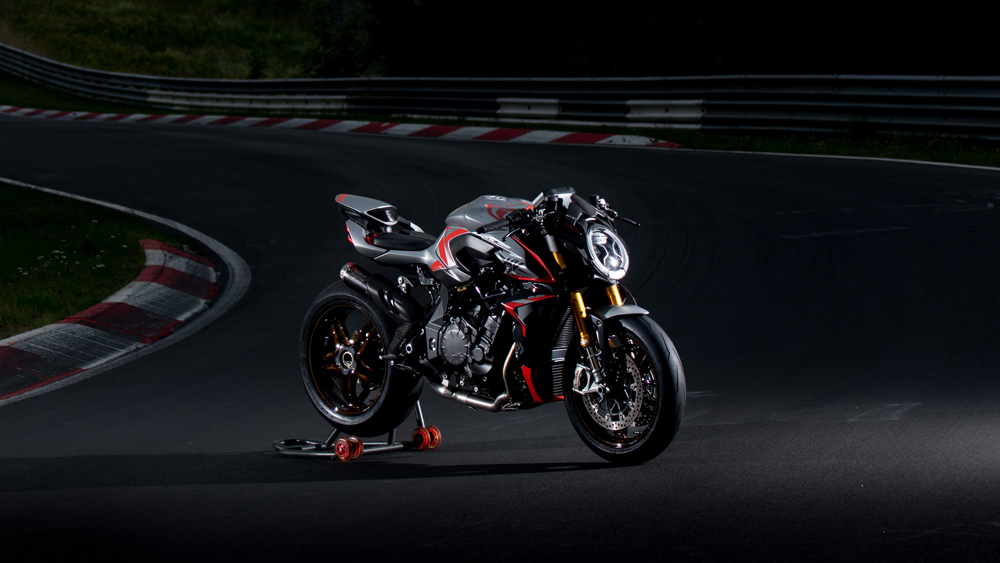 The Nürburgring Nordschleife is a motorsport track that sinks into your soul once you’ve experienced it. A 12.94-mile ribbon of road that snakes its way around the Eifel mountains an hour south of Cologne, Germany, it’s a venue that has beaten the very best drivers and riders across many generations, and is steeped in racing folklore. Now, the racecourse—dubbed “the Green Hell” by the great Sir Jackie Stewart—has an MV Agusta Brutale motorcycle named after it.

The limited-edition Brutale 1000 Nürburgring is based closely off MV Agusta’s incredible Rush 1000 model and features the same inline four-cylinder motor, but with revised camshaft profiles and a different exhaust. The motor is capable of 208 hp in base trim, a figure that gets punched to 212 hp when fit with the stunning single-barrel Akrapovič exhaust and ECU mapping that comes as part of the supplied Race Kit. Normally, MV Agusta makes you pay extra for the latter, but not this time. Aside from the exhaust and ECU, you also get a carbon passenger-seat cover and a numbered certificate.

Öhlins provides the smart electronic suspension for the 43 mm NIX fork and TTX shock, while Brembo graces the Brutale 1000 Nürburgring with its Stylema four-piston caliper and beautiful racing-spec PS13 master-cylinder.

Considering MV Agusta put a lot of development into its new generation of electronics a couple of years ago, we aren’t surprised to see that the dash and electronics are the same as those on the Brutale RR. That means IMU-monitored traction, wheelie control, launch control—you name it. Plus, you can add the MV Ride app to pair your phone to the 5.5-inch TFT display. And talk about a display, the wheels are carbon fiber with MV Agusta streaking a gold film across the weave to create a strikingly stylish presentation.

The inline four-cylinder motor is capable of 208 hp in the model’s base trim.  Photo: Courtesy of MV Agusta Motor S.p.A.

Like so many of the motorcycles that MV produces these days, the Brutale 1000 Nürburgring has a visual aggressiveness that more than hints at its performance. Having said that, this Brutale—cloaked in a color scheme of red, black and silver to replicate many of the racetrack’s buildings and its logo—is a little more understated than the in-your-face aesthetic of the Rush 1000, and thus might appeal to a wider range of tastes.

The bike has a visual aggressiveness that more than hints at its performance.  Photo: Courtesy of MV Agusta Motor S.p.A.

For those who can envision one of these in their garage (or as an art piece for the living room), the MV Agusta Brutale 1000 Nürburgring requires a €10,000 deposit (roughly $11,557) to secure one of the 150 examples slated for production.