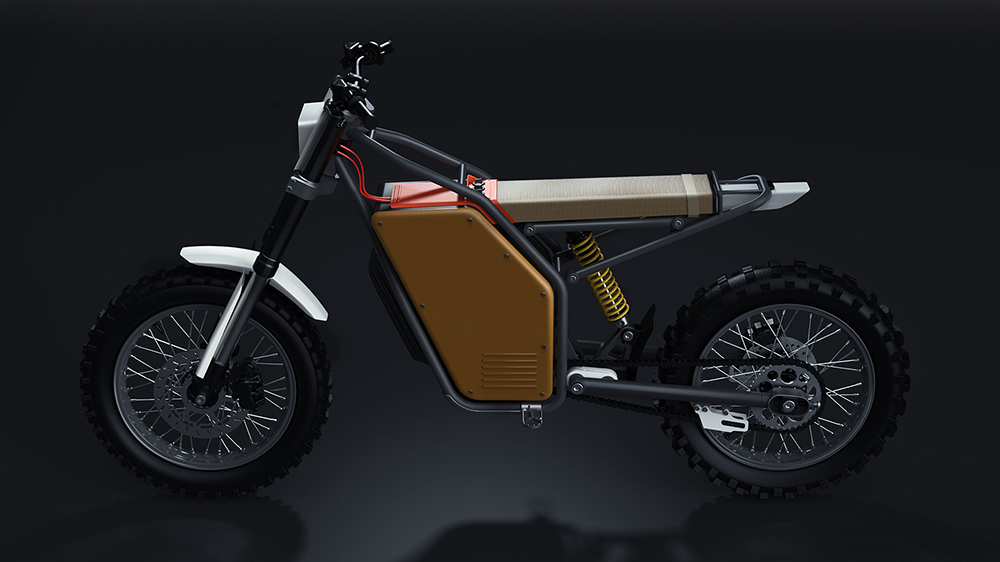 It’s rare for an electric bike to pack the punch of a traditional dirt bike, but one fledgling Danish manufacturer may have penned the exception to the rule. Offset has just unveiled an off-road e-bike with some seriously impressive performance specs and a somewhat imposing presence.

The battery-powered two-wheeler, which goes by the name of OFR-M1, packs a powerful all-electric drivetrain that allows riders to explore off-road terrain without releasing any harmful emissions.

The silent speedster sports a svelte, pared-back silhouette and tips the scales at just 253 pounds, but that belies its bravado. The bike is fitted spoked wheels and fat tires for obligatory romps in the dirt, as well as a USD fork with guards, mono-shock rear suspension, wave brake rotors, a chain final drive and toothed foot-pegs.

As for grunt, the OFR-M1 is equipped with a 6.2 kWh battery pack powering a radial flux motor that can churn out 33.5 hp (25kW) and 59 ft lbs of torque. Offset says the bike can soar from zero to 62 mph in 4.5 seconds and reach a top speed of 80 mph. The battery is good for roughly 1.5 hours of ride time and can charge back up to 85 percent in about 3 hours.

“We are extremely happy to be able to reveal the design. We have spent many months perfecting our product vision and we believe that the outcome is a reflection of that,” Offset’s CEO and co-founder Jakob Kistorp said in a statement. “The all-electric drivetrain has paved the way for our new minimalistic design without compromising on performance.”

In addition to the dirt-goer, Offset is releasing a street-legal, dual-sport variant that has been christened the ODP-M1. The Danish startup says the versatile e-bike “follows the same simplistic design DNA” as the OFR–M1 but can tackle both off-road environments or city streets. It has not yet shared any details regarding performance specs for the ODP-M1.

Offset plans to start taking preorders for the off-road OFR-M1 in 2022, with the road-ready ODP-M1 coming shortly after. In the interim, you can sign up to the site to receive updates regarding the upcoming two-wheelers.