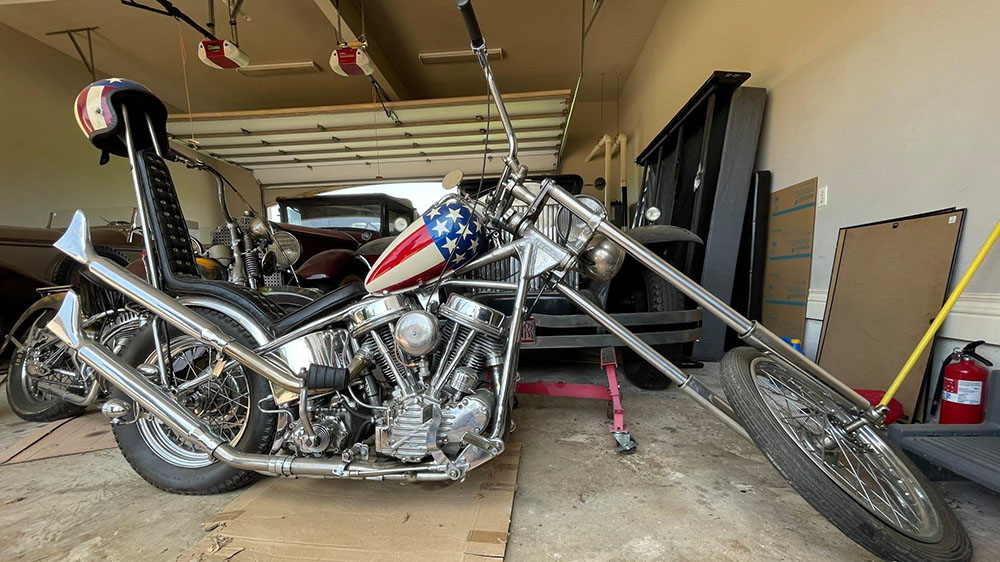 Movie cars may grab most of the attention on the auction market, but that doesn’t mean silver screen motorcycles aren’t just as worthy. And now one of the most iconic of all time is set to go up for grabs.

Captain America, the Harley-Davidson chopper ridden by Peter Fonda in 1969’s Easy Rider, will be auctioned off by Dan Kruse Classics in early June. Although it’s as controversial as the movie that made it famous, the bike could still fetch half a million dollars when it goes under the hammer.

Fonda’s famed motorcycle is a heavily modified 1952 Harley with a stars-and-stripes-painted fuel tank that was custom-built for the movie by Dan Haggerty. The counterculture classic, which starred Fonda and Dennis Hopper, tells the story of two hippie outlaws riding to New Orleans for Mardi Gras following a big drug deal. Although it remains critically acclaimed decades later, the film’s bracing look at the end of the “free love” movement, which included plenty of sex, drugs and violence, was contentious for some.

This particular bike is said to have been used for a fiery crash scene at the end of the movie. Rather than be sent to the scrap yard following filming, it was returned to Dan Haggerty who had customized the four old, beat-up Harleys that were used for filming, according to the Financial Times. The other bikes? Those were all stolen shortly after production wrapped.

Here, though, is where things get hazy. Haggerty, who would go on to star in The Life and Times of Grizzly Adams, restored the wrecked Captain America and would later display it at the Iowa State Fair. It was then sold at auction to Texas realtor Gordon Granger for $63,500 in 1996. It was sold again in 2014 for $1.35 million, except that the bike that was sold wasn’t the one Granger had bought. It was another Captain America that Haggerty claimed was the true bike. Granger’s bike, which is now being sold by his estate, comes with three certificates of authenticity, including one signed by Haggerty who died in 2016.

“The motorcycle we are selling is the crash bike from the movie Easy Rider,” a spokesperson for the auction house said in no uncertain terms to FT.

Although its provenance is now up in the air, this version of Captain America is still expected to fetch top dollar when it goes up for bid on June 21. The bike, which is no longer operational, is expected to sell for between $300,000 and $500,000, according to autoevolution. If the bike is in fact the real deal, that just might be a steal.