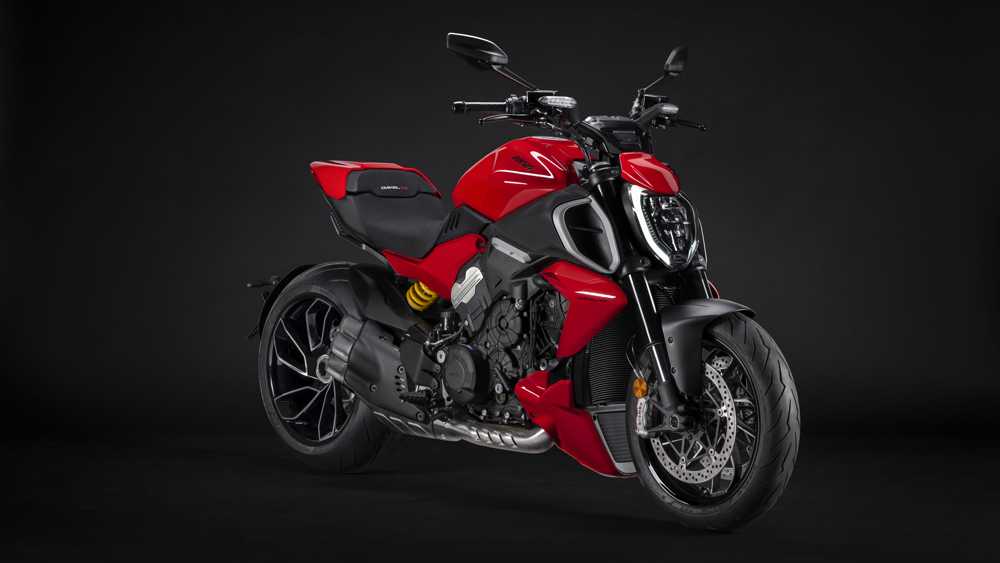 It has been talked about since Ducati debuted the Desmosedici Stradale V4 motor in the Panigale V4 S back in 2018. When will we see this marvel of a motor in the Diavel power cruiser? That time is now, as Ducati has taken the wraps off the new Diavel V4, putting the model into the four-cylinder line with the Panigale superbike range and the Multistrada variants—all of which were previously powered by the famed L-twin motor.

The new Diavel V4 is touted to have 168 hp and 93 ft lbs of torque, and a riding aesthetic unlike anything else on the market today. Consumers in that market have had polarizing opinions on the original model since its inception in 2011, and part of that is due to the massive rear tire that wouldn’t look out of place on a car. That purpose-built Pirelli Diablo Rosso III rubber is wrapped around a gorgeous five-spoke alloy wheel with machined-chrome surfaces, a striking presentation that complements the angry-looking four-outlet exhaust muffler sitting neatly in front of it.

The latest model iteration’s look hasn’t changed much from the outgoing Diavel 1260, but the machine is subtly different everywhere. A new headlight, housing a daytime running light, sits up front while new, high-mounted indicators replace the units integrated into the side panels. In addition, larger intakes for the four-cylinder motor flank the headlight, and the rear brake light is a maze of punctiform LED’s that give the back end a look unlike any other in the current Ducati lineup.

As you’d expect, the Diavel V4 comes with all the usual electronic bells and whistles, and, to be honest, these are not the main highlights of the package. Ducati is the only manufacturer that has Cornering ABS fitted to all of its motorcycles, so it’s no surprise to see it on the Diavel V4. There’s also a Bosch six-axis inertial measurement unit (IMU) that fettles the four riding modes of Sport, Touring, Urban and the new Wet mode. Then there’s the up-and-down quickshifter, traction control, wheelie control, cruise control and launch control.

As for the ergonomics, the seat height has been raised 0.4 inches to now sit at 31.1 inches, and the handlebar has been moved 0.78 inches closer to the rider, all in the name of better low-speed stability and maneuverability. The Diavel handles easily, either with a single rider or with a passenger, however, in single-rider form, the passenger footpegs fold neatly under the rear seat to give an ultra-clean and lean look.

Ducati will be producing a vast array of accessories for the new Diavel V4, including a touring screen, luggage options, billet-aluminum controls and carbon-fiber accents for a little extra bling. Ducati will also be debuting the “Spitfire” racing exhaust that is purported to increase output to 180 hp (and no doubt be extremely loud), so customizing your new ride will be a breeze.