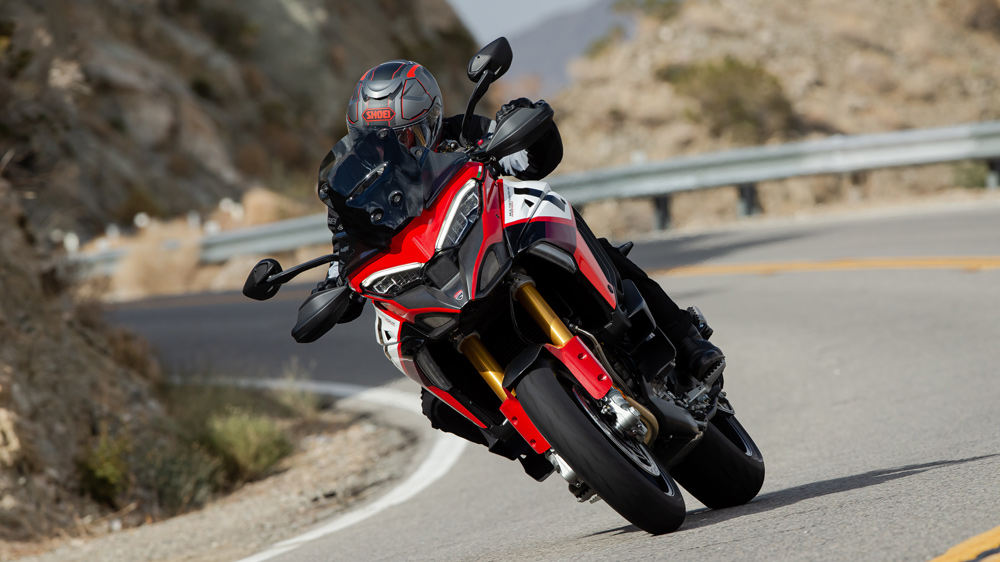 The name Pikes Peak is sacred to Ducati. The mountain, towering over Colorado Springs, Colo., was practically leased by the company when two-wheelers raced the iconic 12.42-mile stretch of tarmac with the late Carlin Dunne taking three wins on the twin-cylinder Multistrada MTS1200/1260 between 2011 and 2018. Motorcycles ceased competing at the venue following Dunne’s fatal accident in 2019, but that hasn’t stopped Ducati from paying homage to its heritage on the hill by taking its Multistrada V4 S and whacking it with the special stick to create the Multistrada V4 Pikes Peak.

The Multistrada is one of the great chameleons of modern motorcycling. When it was introduced in 2010, it was billed as the world’s first four-in-one bike thanks to its four different riding modes which, at the time, was quite revolutionary. Over the years, the Multistrada’s capacity slowly increased, but that was in twin-cylinder guise. Now, with that marvel of engineered excitement that is the 1,158 cc V4 nestled behind the aluminum monocoque’s steering head, you’ve got nothing short of a superbike wolf masquerading as a sheepish sport tourer. The great Mr. Dunne would indeed be proud.

With a claimed 170 hp, 92 ft lbs of torque and fully adjustable, fully programmable electronic Öhlins front and rear suspension, the $28,995 Multistrada V4 Pikes Peak comes to the game with some serious chops. Bear in mind, this is still a sport tourer, and numbers like these were, until very recently, reserved for bikes with slick tires and track apexes to annihilate.

Yet there’s no getting away from the fact that the V4 Pikes Peak is a large motorcycle, one that weighs 527 pounds with a topped 5.8-gallon tank of go juice. You’ve also got a lot of bodywork in your vision as you slot into the cockpit (rather than on it). Ducati has gone completely to town with the electronics, which is the first thing you notice after you’ve settled in comfortably. The adaptive cruise control and blind-spot detection that debuted last year on the base Multistrada V4 S are present on the Pikes Peak, as are heated grips, variable engine and throttle maps, a 6.5-inch TFT color display with Ducati Connect and full-map navigation system and quick-shifter functionality. In addition, there are all of the usual assists such as traction control, Cornering ABS, engine brake control and wheelie control within your grasp.

With the bike’s engine control unit (ECU) set to the Panigale-derived Race mode (which makes its Multistrada debut on the Pikes Peak iteration), this Multistrada variant is given the model line’s most direct throttle response at the twist grip, and the performance is nothing short of breathtaking. Howling its song through the Akrapovič titanium exhaust, the engine presents a rapidity that is at odds with the large, tall surrounds of the chassis and bodywork. But be assured, your consciousness is utterly dominated by that colossal power plant and all it has to offer.

Ducati has finally nailed the sweet spot with this motor in Multistrada form. It’s tuned slightly differently compared to when it’s used in the Streetfighter or Panigale, and its performance scale ranges from just off idle to mind-numbingly fast. Mated to 17-inch wheels—wrapped in Pirelli Diablo Rosso IV rubber—the chassis demonstrates a penchant for slaying corners in glorious comfort. In terms of ergonomics, the narrower handlebar is mounted lower on the triple clamp and the footpegs are situated higher and further back on the frame, thus encouraging the rider to load the front tire up on corner entry to maximize the surprisingly agile and quick turn speed of the monocoque chassis.

The base model Multistrada and V4 S version may indeed be the four-bikes-in-one configuration that Ducati has claimed for over a decade, but the V4 Pikes Peak is more focused and aggressive in its demeanor. This is a very sporty motorcycle, regardless of what the attire may tell you.

One small deterrent, at least in our opinion, is that the bike only comes in the red-and-white color scheme, complete with that huge numeral “1” on the side. While the look may be considered a little garish, there are some riders who will no doubt love it, as it makes them feel as though they themselves are Carlin Dunne racing through Devil’s Playground on his way to another Pikes Peak win.

Ducati has created the near-perfect motorcycle for riders who once owned a sportbike, still love the performance, and are not ready to go quietly into the cruiser crowd. As comfy as a couch and as fast as a superbike, the V4 Pikes Peak is everything you could ask for from the sport tourer category.