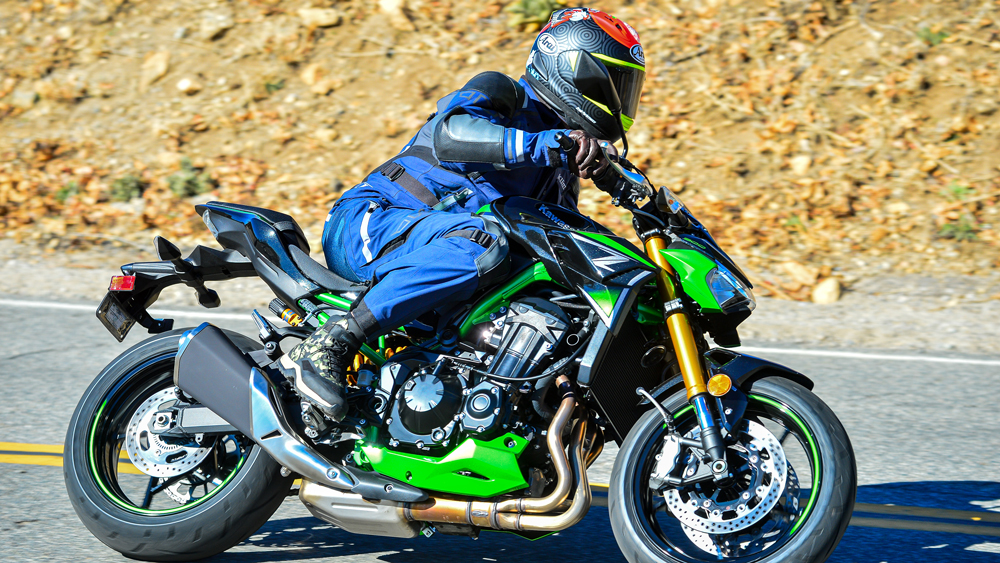 If you’ve got a good thing going, conventional wisdom is not to mess with it too much. That’s the track Kawasaki is taking with its new Z900 SE. The Japanese giant’s venerable Z900 ABS naked bike has been a high achiever, though a somewhat quiet one, but it has never possessed top-of-the-line components. The base model has ancient brakes and a soft, spongy suspension that are at odds with the lively and spritely performance offered by the 948 cc inline-four motor. The Z900 SE, priced at $10,699, has inherited better.

Kawasaki has seen fit to give some much-needed attention to the suspension and brakes, with the front suspension replaced by a fully adjustable 41 mm Showa fork, and the shock has been upgraded to a shiny gold S46 Öhlins unit for far superior road holding compared to the base model. And the brakes now feature dual Brembo four-piston M4.32 calipers and a new Nissin master-cylinder. Although there’s not a night-and-day difference in braking power, the difference in feel is what you will really notice. What you squeeze at the lever is pretty much what you get at the caliper, bearing in mind you still have a slightly intrusive ABS system to deal with.

The superior performance where it matters has turned the Z900 score up a number of notches in my book. Already graced with a lovely motor that really comes alive north of 5,000 rpm, the Z900 SE now takes that delivers that output in a smoother and more controlled fashion via the new suspension, and does so in a manner that the stock Z900 can’t compete with.

The base model’s shock has been replaced by an S46 Öhlins unit as part of the upgrade.  Photo by Peter Jackson.

This is a very versatile motorcycle. It’s a dream to run errands on and will keep up with most sub-1,000 cc machines at sane speeds, but it’s not trying to be something it’s not, which is a high-end naked bike competing with the likes of BMW, KTM, Ducati and Aprilia. The SE will set you back an extra $1,600 over the base model and, along with the brakes and suspension, you’ll get the quite pretty paint scheme of Metallic Spark Black and Candy Lime Green, along with the little metallic paint flakes that sparkle at night. By contrast, the base model gets rather bland gray and purple colorways.

The bike does have its shortcomings, however. Kawasaki still runs a cable throttle on the Z900 SE, and so cruise control is not possible. The machine is also devoid of a quickshifter, which, these days, should be par for the course. You do still get four variable engine modes, a High and Low power mode, ABS, traction control and smartphone connectivity, so all is not lost on the electronics front.

One plus is that the 948 cc motor has proven rock solid as far as reliability, which is largely due to Kawasaki having an encyclopedic knowledge of large-capacity four-cylinder motors that dates back to the early 1970s, so you’re in good hands there. With the Z900 SE, Kawasaki has filled many of the required briefs for a modern naked bike, and built a good one. Should the Z900 SE ever get cruise control and a quickshifter, it could be a great one.