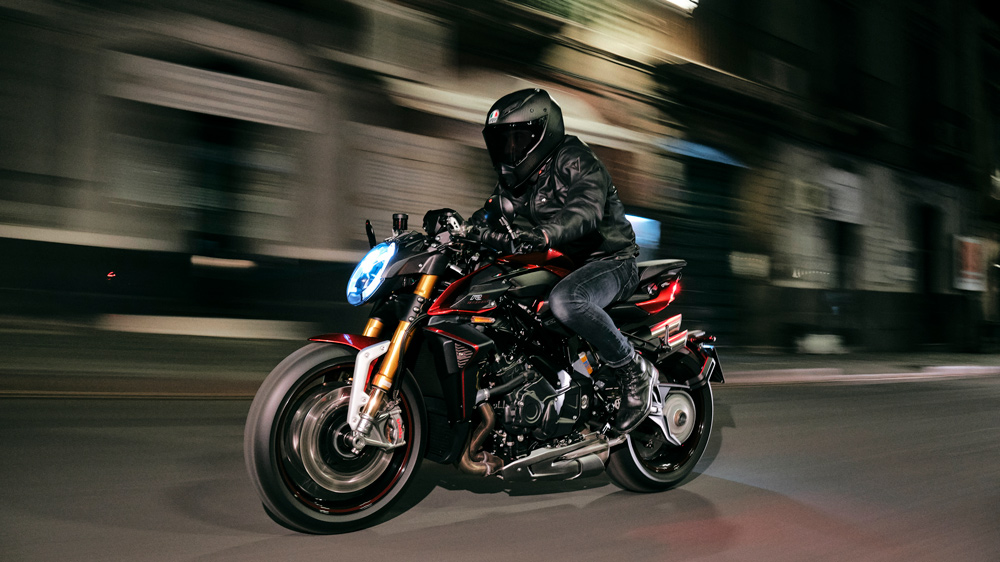 The motorcycles from Italian manufacturer MV Agusta have always been prized by the crowd who want something a little different. Compared to powerhouse Ducati, located about 180 miles southeast of MV Agusta’s base in Varese, Italy, MV Agusta has somehow always infused that custom-built feel to its models. The company’s checkered history reads like a dime-store novel, but now with Russian billionaire Timur Sardarov at the helm, it appears the brand has its best chance yet of solidified, long-lasting commercial success.

Lately, MV Agusta has focused on a series of limited-edition models, touting partnerships with French car company Alpine and even Formula 1’s Lewis Hamilton a few years ago, and its collective stamps of approval have added to the price of each bike sold in its name.

Starting 2022 off with a bang, MV Agusta has released nothing short of a brutal monster in the form of the $33,800 Brutale 1000 RR. One look at the motorcycle should leave you in little doubt as to its intent. A naked bike with a sportbike-style that includes clip-on handlebars and an extremely race-inspired ride position, the RR is unapologetically focused.

With a claimed 208 hp from its inline-four motor, this model variant is, without a doubt, one of the fastest two-wheel machines you can legally ride. Everything is compact, tight and a little raw, with carbon fiber adorning much of the admittedly sparse bodywork and that glorious deep-red paint cloaking the gas tank and front guard. Personally, I could look at it all day. The exhaust design, the front wings sitting aside the radiator, the machined middle triple-clamp holding top-spec electronic Öhlins forks—it’s all very lavish and excessive. It’s all very MV Agusta.

From the hot seat, the RR seems to demand to be ridden as fast as possible . . . all the time. But that’s not how the real world works. In reality, the model falls short in areas that seem quite basic. The ride position, for example, has the rider’s feet resting against the exhaust guard and the bottom of the passenger footrests. Who knows why a person would want to get on the back of this red missile on that tiny seat, anyway, and I feel the passenger footrests should be able to be tucked away—out of sight—to let the exhaust system’s aesthetic truly shine.

Then there’s the motor, which has a terrible flat spot at 5,000 rpm, which means you either need to slip the clutch hard to keep it above 6,000 rpm or see the MV fall flat on its face and labor through the 5,000 rpm mark. And the cruise control doesn’t disengage when you roll the throttle back, or when you caress the rear brake. Only when you give the rear or front brake a hard squeeze do you begin to slow, and this is something not only unacceptable but dangerous.

On the plus side, when the motor is spinning above 7,000 rpm, there’s power for days. The RR’s high-speed manners are excellent as you tuck into a crouch and let the chassis do its thing, slicing from corner to corner in the canyons. Yet the gearbox’s quick-shifter cut is far from the smoothest I’ve experienced and could use a bit of refining.

Massive Brembo brakes haul everything up nicely, and there’s the usual array of electronics via the Continental IMU (Inertial Measurement Unit), including traction control, wheelie control and ABS. However, for a motorcycle at this price point, I expect more.

When the inline-four motor is spinning above 7,000 rpm, there’s power for days.  Photo: Courtesy of MV Agusta Motor S.p.A.

The Brutale 1000 RR is too raw and feels unfinished from behind the handlebars. The good news is that the more traditionally crafted Brutale 1000 RS, with a conventional single-piece handlebar and a different engine tune might make up for the RR’s shortcomings. Rest assured, we’ll be testing that one as soon as it becomes available.